The cuisine of Algeria is influenced by Algeria’s interactions and exchanges with other cultures and nations over the centuries. Algerian cuisine is typically a mix of Berber, Arabic, Andalusian, and Mediterranean cuisines with slight European. 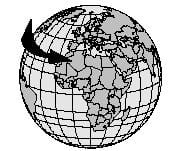 Algeria is located in North Africa on the Mediterranean Sea. The fertile and mountainous northern region is home to the olive tree, cork oak, and vast evergreen forests where boars and jackals roam. Fig, agave, and various palm trees grow in the warmer areas. The grape vine is native to the coastal plain. Central Algeria consists of the High Plateaus that contain salt marshes and dry or shallow salt lakes. The land becomes more arid (dry) the farther south one travels, eventually becoming the Sahara Desert. Roughly 80 percent of the country is desert, where vegetation is sparse. Camels are widely used in this arid region, although jackals, rabbits, scorpions, and snakes also occupy the deserts.

The coastal region has a typical Mediterranean climate—pleasant nearly year round, with winter temperatures rarely falling below freezing (32°F). Rainfall is also abundant along the coast. Farther inland, higher altitudes receive considerable frost and occasional snow. Little or no rainfall occurs throughout the summer months in this region. In the Sahara Desert, rainfall is unpredictable and unevenly distributed.

Algerian cuisine traces its roots to various countries and ancient cultures that once ruled, visited, or traded with the country. Berber tribesmen were one of the country’s earliest inhabitants. Their arrival, which may extend as far back as 30,000 B.C., marked the beginning of wheat cultivation, smen (aged, cooked butter), and fruit consumption, such as dates. The introduction of semolina wheat by the Carthaginians (who occupied much of northern Africa) led the to produce pasta. 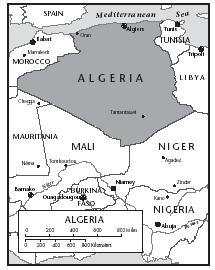 Berbers to first create couscous , Algeria’s national dish. The Romans, who eventually took over Algeria, also grew various grains. At the beginning of the twenty-first century, Algeria ranked among the top ten importers of grain (such as wheat and barley) in the world, according to ArabicNews.com.

Muslim Arabs invaded Algeria in the 600s, bringing exotic spices such as saffron, nutmeg, ginger, cloves, and cinnamon from the Spice Islands of eastern Indonesia. They also introduced the Islamic religion to the Berbers. Islam continues to influence almost every aspect of an Algerian’s life, including the diet.

Olives (and olive oil) and fruits such as oranges, plums, and peaches were brought across the Mediterranean from Spain during an invasion in the 1500s. Sweet pastries from the Turkish Ottomans and tea from European traders also made their way into Algerian cuisine around this time.

In the early 1800s, Algerians were driven off their own lands and forced to surrender their crops and farmland to the French. The French introduced their diet and culture to the Algerians, including their well-known loaves of bread and the establishment of sidewalk cafés. This French legacy remains evident in Algerian culture. In fact, Algeria’s second language is French. (Arabic is the official language.)

Tomatoes, potatoes, zucchini, and chilies, significant to Algerian local cuisine, were brought over from the New World.

3. FOODS OF THE ALGERIANS

Traditional Algerian cuisine, a colorful combination of Berber, Turkish, French, and Arab tastes, can be either extremely mild or packed with flavorful seasonings. Ginger, saffron, onion, garlic, coriander, cumin, cinnamon, parsley, and mint are essential in any Algerian pantry.

Couscous, the national dish, is often mistaken as a grain itself, rather than pasta. The pasta dough is a mixture of water and coarse, grainy semolina wheat particles. The dough is then crumbled through a sieve to create tiny pellets. Algerians prefer lamb, chicken, or fish to be placed on a bed of warm couscous, along with cooked vegetables such as carrots, chickpeas, and tomatoes, and spicy stews. Couscous can also be used in desserts by adding a variety of ingredients, such as cinnamon, nutmeg, dates, and figs.

No Algerian meal would be complete without bread, normally a long, French loaf. Similar to Middle Eastern customs, bread is often used to scoop food off of a plate or to soak up a spicy sauce or stew. More traditional
Berber families usually eat flat, wheat bread.

Mechoui, a roasted whole lamb cooked on an outdoor spit, is usually prepared when a large group of people gathers together. The animal is seasoned with herb butter so the skin is crispy and the meat inside is tender and juicy. Bread and various dried fruits and vegetables, including dates (whose trees can thrive in the country’s Sahara desert), often accompany mechoui .

Beverages such as mint tea are a favorite among all North African countries. Tea is usually offered to visiting guests, though coffee flavored with cardamom is another option. With the abundance of fruits year round, fresh juices are plentiful and children tend to favor apricot nectar.

Sharbats, fruit or nut-flavored milk drinks, are popular with all ages, including sahlab, a sweet, milky drink. Traditional Berbers, in particular, prefer drinks made from goat milk, although cow milk is now available.

Basbousa (Egyptian semolina cake), tamina (roasted semolina with butter and honey), and sweetened couscous are just a few sweets enjoyed by the Algerians. 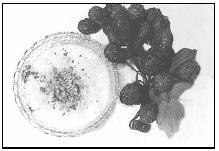 Sahlab, shown topped with chopped pistachios, is a favorite treat, often served when the weather is chilly.

The overwhelming majority of Algerians, about 99 percent, follow the beliefs of Islam, the country’s official religion (Christians and Jews make up only 1 percent of the population).

The Algerian observance of Ramadan, the ninth month of the Islamic year (most often November or December), is the most celebrated of all holidays. During the monthlong observance, Muslims are required to fast  (avoid consuming food and drink) between sunrise and sunset, although young, growing children and pregnant women may be allowed to eat a small amount.
At the end of each day during Ramadan, sometimes as late as midnight, families join together for a feast. French loaves or wheat bread and a pot of hot mint tea will likely serve as refreshments.

The meal marking the end of Ramadan, Eid al-Fitr, is the most important feast. It almost always begins with soup or stew.
Lamb or beef is most often served as the main dish, although families living close to the Mediterranean in northern Algeria enjoy a variety of seafood. In most Algerian homes, a bowl of fresh fruit is placed on the table at the end of the meal. Traditionally, each person is responsible for peeling and slicing his or her own fruit. However, on special
occasions such as Eid al-Fitr , the host will often serve the fruit already peeled, sliced, and flavored (most often with cinnamon and various citrus juices).

Other popular holiday celebrations are Labor Day (May 1), and the anniversary of the revolution over French control (November 1). Two local festivals that are celebrated every spring are the cherry moussem (festival) in Tlemcen and the tomato moussem in Adrar. 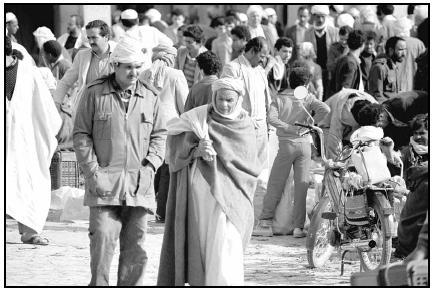 The marketplace in Algiers bustles with shoppers.

Arabs are hospitable and encourage family and friends to share their food. Even an unexpected visitor will be greeted warmly and offered coffee (often flavored with cardamom), while the females of the household prepare the meal. Cooking continues to be considered a woman’s duty, as it has in the past. Historically, recipes and cooking customs have been passed down through generations by word of mouth when women gather together to prepare meals.

All meals (normally three a day) are leisurely and sociable, although there are varying degrees of structure and etiquette (polite behavior).
Seated at a low table (tbla or mida), food is traditionally eaten with the thumb, forefinger, and middle finger of the right hand (the left hand is considered unclean). To use four or five fingers is considered to be a sign of over-eating and should be avoided. The dining atmosphere in a middle class family may be a bit more elegant. A servant or young family member might visit each individual at the table, offering a bowl of perfumed water to diners for washing their hands before the meal is eaten. 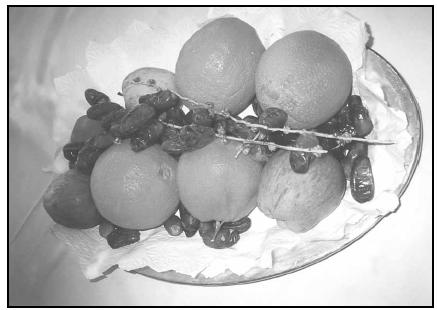 The country’s capital, Algiers, and popular coastal towns tend to have a wide variety of restaurants, particularly French, Italian, and Middle Eastern cuisine. Southern Algeria is less populated, and is farther from Algiers and the Mediterranean waters, where seafood and the hustle and bustle of trade are plentiful. Menus usually begin with either a soup or salad, followed by roast meat (usually lamb or beef) or fish as a main course, with fresh fruit commonly completing the meal. In the towns, souks (markets) or street stalls offer take-home products, such as spicy brochettes (kebabs) on French bread for those on the run. With the exception of an occasional fast food burger, school lunches are often such traditional foods as couscous, dried fruit, stews, and sweet fruit drinks.

Malnutrition has been one of the principal health problems in Algeria in recent years. About 5 percent of the population of Algeria is classified as undernourished by the World Bank. This means they do not receive adequate nutrition in their diet. Of children under the age of five, about 13 percent are underweight, and nearly 18 percent are stunted (short for their age). Very little land in Algeria is cultivated (only 3 percent), too little for the country to be self-sufficient and feed its own people.

However, 91 percent of the population has access to adequate sanitation: nearly 100 percent of those in urban areas and 80 percent in rural areas.
Free medical care, which was introduced by the Algerian government in 1974 under the Social Security system, helps pay for those who are ill.

The Book of North African Cooking

Samia, by Philippe Faucon. (Official selection at the 2000 Venice Film Festival) Samia is a teenage girl of Algerian descent living in Marseille (southern France) with her family. At home, Samia and her two sisters live in an Algerian culture. They speak the language, eat Algerian food, and observe the customs of their Muslim religion. But, as youngsters, they are torn; despite their parents’ objections, they want to fit in with the rest of society. To be a young girl in this environment is even more difficult because her family’s traditions have society believing that she has no independence. As she begins to spread her wings, the quick-witted and attractive Samia soon finds herself in conflict with her family. (In French and Arabic with English subtitles.)