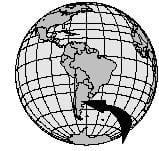 
Argentina is a wedge-shaped country, the second largest (after Brazil) in
South America. In the west, it has the Andes Mountains, but the majority
of Argentina's land is low. Because Argentina lies in the Southern
Hemisphere, the winter months are May through August, and the warmest
summer month is January. Argentina's climate and rich, lowland
regions combine to make it one of the world's greatest
food-producing nations. More than 4 percent of the world's cattle
are raised by Argentine cattle ranchers. Argentina is also South
America's largest producer of honey, an ingredient that makes its
way into many delicious Argentine desserts.

Native Indians lived in Argentina many years before the European explorers
arrived. Members of an Indian tribe in the northern part of Argentina were
farmers who grew squash, melons, and sweet potatoes. Spanish settlers came
to Argentina in 1536. Between 1880 and 1890, nearly one million immigrants
came from Europe to live in Argentina. Most were from Italy and Spain. The
Italians introduced pizza, as well as all kinds of pasta dishes, including
spaghetti and lasagna. British, German, Jewish, and other immigrants also
settled in Argentina, all bringing their styles of cooking and favorite
foods with them. The British brought tea, starting the tradition of
teatime. All of these cultures influenced the dishes of Argentina.

3 FOODS OF THE ARGENTINES

Beef is the national dish of Argentina. There are huge cattle ranches in
Argentina, and the

or Argentine cowboy, is a well-known symbol of Argentine individualism.
Many dishes contain meat, but prepared in different ways. A favorite main
course is

a mixed grill of steak and other cuts of beef. Grilled steak is called

, a beef roast cooked over an open fire is called

, and beef that is
dipped in eggs, crumbs, and then fried is called

is a stew that contains meat, potatoes, sweet potatoes, and chunks of
corn on the cob. 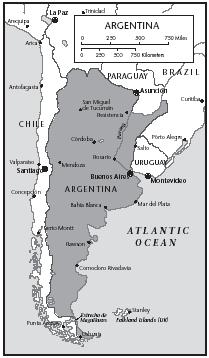 Because many Argentines are descendents of the Italian immigrants who came
to Argentina in the late 1800s, Italian dishes are found throughout the
country. Some favorite Italian dishes include pizza, all kinds of pastas
(such as spaghetti and ravioli), and

Argentines eat more fruit than almost any other group of people in the
world. Some favorite fruits include peaches, apricots, plums, pears,
cherries, grapes, and

, the fruit of a prickly pear cactus.

, little pies usually stuffed with beef, vegetables, and cheese, are a
favorite dish. These are eaten by hand and they are often enjoyed as a
snack, or may be carried to school for lunch.

, a dipping sauce, is usually served with

. Because the sauce has to sit for two hours before eating, it is prepared
before the 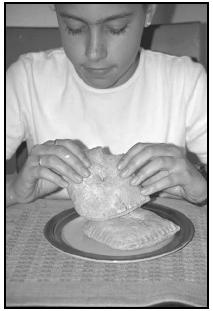 Empanadas, homemade or purchased from a vendor, are popular for
lunches or as snacks.

Lent is the 40-day period preceding Easter in the Christian year. During
the week before Lent, a large festival, Carnival, is celebrated in many
parts of Argentina. During Carnival, people dress up in costumes and
dance. They eat spicy food, including corn stew and

(corn patties wrapped and cooked in their husks). It is a tradition to
eat a cake in the shape of a large ring. On Easter, children eat chocolate
eggs with tiny candies hidden inside.

Because it is also tradition in the Roman Catholic Church to not eat meat
during Lent, Argentines eat more seafood dishes during this time.

(finger sandwiches), made with shrimp are a popular lunch or snack food
during Lent.

On Christmas Eve, celebrated on December 24, Argentines eat a late meal of
cold beef, chicken, or turkey, and fruit salad. Because Christmas occurs
during summertime in South America, Argentines often eat the meal outside
on decorated tables. After dinner, they eat almonds, dried fruits, and

, a sweet bread that is similar to fruitcake but has fewer fruits and
nuts. 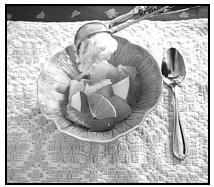 Fruit salad offers a refreshing balance of sweet and tart flavors
with honey and lemon juice in the dressing, and a topping of sweet,
light frozen yogurt.

In many areas of Argentina, people hold festivals to honor aspects of the
environment. For example, a city on the Atlantic coast celebrates the
seafood harvest that is brought in from its fishing grounds. It is
tradition for people to eat a seafood feast of shrimp, crab, and scallops.
After the feast, a parade with people dressed in sea-creature costumes is
held. Someone dressed as The Queen of the Sea leads the parade, sitting in
a giant seashell.

Argentine families, like families everywhere, are busy. Because everyone
is on a different schedule, they aren't able to eat every meal
together.

(day-sigh-OO-noh, breakfast) is often a light meal of rolls or bread with
jam and coffee. Most working people in the cities have a small 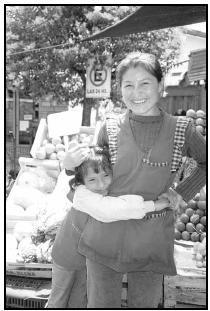 An Argentine fruit and vegetable vendor and her daughter greet
customers at a market.

(coh-MEE-dah, lunch) such as a pizza from a cafeteria. A farmer eats a
hot dish for lunch, carried out to him in the field, of beef, potatoes,
and chunks of corn-on-the-cob. Upper-class city families usually eat a
large midday meal of meat, potatoes, and green vegetables.

In the late afternoon, Argentines have a snack of tea, sandwiches, and
cake to hold over their appetite until dinner (

The tea-time tradition comes from the British immigrants that brought tea
to Argentina in the late 1800s.

(a sausage sandwich) and soda.

to school for lunch. A favorite drink is a

, or milk with chocolate syrup.

The dinner meal has several courses, including meat dishes, and ends with
dessert.

(milk jam) is a favorite dessert for many Argentine children. It is often
eaten with bananas or as a filling in

To make Dulce de Leche (milk jam), fill a pan with sweetened,
condensed milk and cover the pan with foil. Place it in a larger pan
with about one inch of water in it.

Most people in Argentina receive adequate nutrition in their diets,
although the World Bank classifies a small percentage as malnourished.
Almost three-fourths of the population has access to safe drinking water
and sanitation (hygienic conditions and safe disposal of waste products).
A small percent of children under age five are underweight (about 2
percent) or stunted (are short for their age, 5 percent). These children
are
from the poorest Argentine families, and may live in cities or rural
areas.

Buenos Aires: And the Best of Argentina Alive!

Latin American Cooking Across the U.S.A.