Australian cuisine refers to the food and cooking practices of Australia and its inhabitants. As a modern nation of large-scale immigration, Australia has a unique blend of culinary contributions and adaptations from various cultures around the world, including Indigenous Australians, Asians, Europeans and Pacific Islanders. 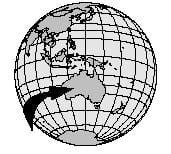 Australia is the world’s smallest continent. Lying southeast of Asia between the Pacific and Indian oceans, its diverse landscapes and climates are home to a wide variety of plants and animals.

It is generally warm and dry all year round, with no extreme cold and little frost. Average annual rainfall is 17 inches (42 centimeters), muchless than the mean for all the countries  of the world of 26 inches (66 centimeters). As a result, insufficient rainfall can cause droughts that threaten to destroy crops.

The country’s limited rainfall can also cause problems with water quality and availability. Because Australia produces most of its own food, a water shortage for plants and animals can cause agricultural production to suffer.

Captain Arthur Phillip of England established the first modern settlement in Australia in January 1788. The settlers were not very experienced as farmers and early agricultural practices were disastrous. Crop failure caused food shortages and even starvation. Settlers depended on goods imported from England—such as tea, flour, beef, oatmeal, and cheese—to survive. They also learned to eat foods they found around them, such as fish and wild fruits and nuts.

The Australian diet has been heavily influenced by peoples from all over the world. The Potato Famine of the 1840s in Ireland led many desperate starving Irish people to leave their homeland, seeking relief in Australia (as well as Canada, the United States, and elsewhere). Gold was discovered in Australia a few years later, bringing more people to the country. Following World War II (1939–45), Europeans and Asians arrived in greater numbers. As a result, cuisines from other countries, such as Italy, Greece, and Lebanon, became popular. Europeans introduced tea, cocoa, coffee, fruits, and a variety of cheeses, and Asians introduced new spices and the technique of stir-fry. 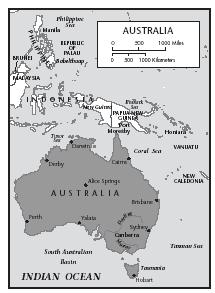 3 FOODS OF THE AUSTRALIANS

The end of World War II brought about significant change in Australian cuisine. People from Europe and Asia brought new crops, seasonings, and cooking methods with them.

Wheat, rice, oranges, bananas, and grapes are just a few of the crops that grow in abundance throughout the country. Meat has always been a large part of the Australian diet, although Australians (like others around the world) began to be concerned about controlling cholesterol and fat in their diet, and decreased their consumption of meat slightly toward the end of the twentieth century. Kangaroo, though once a popular meat in Australia’s early history, is no longer widely  consumed; beef, lamb, pork, poultry, and seafood are more common in twenty-first century Australia.

A typical breakfast may consist of fruit, toast with Vegemite (a salty yeast spread), fried eggs and bacon, and juice. Lunch may be an apple or a salad (such as Grated Carrot, Apple, and Raisin salad), a sandwich filled with tuna or deli meats, and an ANZAC biscuit for a treat. (ANZAC is the acronym for Australia and New Zealand Army Corps. No one knows for sure, but many people think these biscuits were first prepared for troops—and for Australian and New Zealand families—around 1915 during World War I.) Dinnertime often brings leg of lamb or barbecued prawns (shrimp), roasted vegetables, a salad, and a custard or tart for dessert.

Damper, a simple homemade bread, and billy tea , named for the pot it is heated in, both remain a staple for any meal. Meat pie is considered the Australian national dish. One newspaper, the Sydney

Morning Herald, reported some statistics about meat pie consumption in the country: Meat pie, with dozens of recipe variations, is considered the Australian national dish. 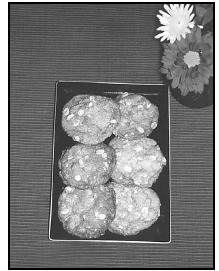 Anzac biscuits have been popular with Australians for decades.

A Biscuit for a Treat?

Australians, like the English, call cookies “biscuits.” They often use the nickname “bickies” or “bikkies” especially when offering a biscuit to a child (or even when offering a treat to a pet). Every household has a biscuit tin, a decorative round tin with a lid, to keep the supply of biscuits handy.

Most Australians spend holidays with family, participating in special events and preparing a festive meal. Since the temperatures are mild, meals are often consumed outdoors at a picnic or on the beach. Because Australia is in the Southern Hemisphere, the seasons are the opposite of those in North America and Europe. Christmas falls in the middle of summer, when most school children are on their summer vacation. A typical Christmas menu may include a variety of hot and cold meats, seafood, pasta, salads, and many types of desserts. Mince pies, fruitcake, shortbread, and plum pudding are also popular after-dinner treats.

Christmas puddings may contain a small favor baked inside. It is said that the person who finds the favor will be blessed with good luck.

Easter is also widely celebrated in Australia. A traditional menu consists of roast lamb, beef, or chicken with roasted vegetables such as potatoes, carrots, peas, or broccoli. Seafood, lasagna, and salads are also favorites. Pavlova, an elegant dessert made of egg whites and sugar and garnished with fruit, is a popular Easter dessert. Most children prefer candy, and chocolate eggs are Easter favorites. Treats are often shaped like an Easter bilby, an endangered Australian mammal that resembles the North American Easter bunny.

While not authentic, this recipe will produce a dessert that resembles pavlova.

Australians traditionally spent hours in the kitchen preparing meals for family and friends. The introduction of microwave cooking helped to speed the cooking process for busy Australian families, and also helped keep their kitchens cooler. As of 2000, nearly half of all households owned a microwave oven.

Serve quick pavlova garnished with fruit such as sliced kiwi or strawberries.

Australians eat three meals each day and enjoy an afternoon break for “tea and biscuits.” Breakfast is normally eaten between 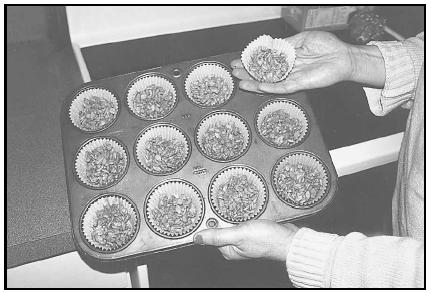 Lunch is increasingly being bought on the go as fast food. Australians’ afternoon “tea and biscuits,” served
around 4 P.M. , is usually composed of tea (or other beverage) accompanied by biscuits (cookies), small sandwiches, scones, or cakes. For school children, afternoon tea is the after-school snack. Dinner, the largest meal of the day, is served around 6 P.M. and is traditionally eaten European style, with the fork in the left hand and the tines pointing down, and the knife in the right.

Children normally enjoy snacks during the day, such as fruit, a beverage, or a small sandwich. Milo, similar to instant hot chocolate mix, is oftenused as an ingredient in snacks or drunk alone. Lamingtons, Chocolate Crackles (similar to crispy rice cereal treats in North America), ANZAC biscuits, or just a simple fruit salad, are also popular among children.

Restaurants offer a wide variety of cuisines for those who prefer to eat out. They often offer seafood and meats that are not normally prepared at home, such as stingray and emu (similar to the ostrich). Cafes offer lunch and afternoon tea and serve as meeting places. Such places also offer a variety of beverages. Coffee is growing in popularity, although tea is preferred in the afternoon and on Sundays, a traditional day for visiting with family and friends.

Toast with Vegemite or Milo Spread 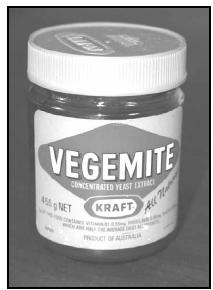 Vegemite’s distinctive jar with the red and yellow label may be found in large supermarkets around the world.

Beginning in the 1980s, Australian adults (like adults in many developed countries) began to improve their eating habits, according to a 1995 Australian Bureau of Statistics study. Meat, a source of saturated fat, is being consumed less. Chicken and seafood are eaten more frequently. Fruits, vegetables, and grains are also consumed more often. There is, however, also an increase in the purchase and consumption outside of the home of foods and beverages that are generally higher in fat. Approximately 64 percent of men and nearly half of all women are overweight or obese.

The study included the diet of Australian children under the age of 15. It found that around one-third of children younger than 12 had no fruit in their diets, and more than one-fifth had no vegetables. The amount of sugar consumption, however, declined and vegetable consumption increased with age. The majority of children usually eat breakfast on five or more days per week, with 12- to 15-year-olds eating breakfast the least often.

Promoting healthy eating habits among children is an important issue in Australia. The government has allocated funding for community projects, mostly for the disadvantaged. Fresh and nutritious foods are often unavailable for children in rural and remote areas. Indigenous (native) groups, such as the Aborigines, frequently live in these disadvantaged areas.

Australia: The Land Down Under (Exploring Cultures of the World)

Good Food from Australia: A Down Under Cookbook

The Australian Academy of Technological Sciences and Engineering. [Online]
Available

The Australian Institute of Health and Welfare. [Online] Available