Aborigines (ah-bow-RIH-jeh-neez) are people who have lived in Australia
for approximately 40,000 to 60,000 years. The word comes from the Latin
words—

—which mean "from the beginning." Historically, the
Aborigines were hunters and gatherers, and a small percentage were still
living this traditional lifestyle as of the twenty-first century.
Gathering plants or hunting animals usually depends on the climate.
Central Australia is fairly dry and plants are sparsely scattered over the
land. Aborigines rely on hunting animals and eating seeds and roots of
plants for survival. In northeastern Australia, tropical trees offer a
variety of fruits, vegetables, and nuts, including the popular macadamia
nut. Those living along the coast who follow the traditional Aborigines
lifestyle have access to seafood.

Most Aborigines are known to be skilled at growing things and most often
use the land efficiently. Historically, they discovered that ashes from a
fire acted as a natural fertilizer, providing nutrients for new plants to
grow. Although this was successful, some groups living in the dry
Australian desert regions often suffered a lack of food and were forced to
move elsewhere.

Before the arrival of Europeans in the late 1700s, the Aborigines were
successful hunters and gatherers. They lived off the land by understanding
plants, animals, and natural resources. Aborigines continue to feel that
they have a special relationship with the land.

The Europeans brought a new, unfamiliar way of life to the Aborigines. The
European colonists established permanent 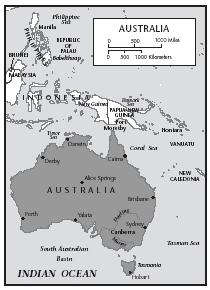 homes, prepared food in pots and pans, and traded goods outside of
Australia. Some Europeans adopted customs from the Aborigines, such as
food-gathering techniques, but most continued to live by European customs.

Along with a different way of life, the Europeans carried new diseases,
often infecting the Aborigines, who had no resistance to foreign
illnesses. Thousands of Aborigines died and their population decreased.
Many who survived were forced to abandon their land and move to areas that
were governed by the European settlers. This limited their ability to live
a traditional lifestyle. It became difficult to grow, gather, hunt, and
prepare traditional foods. As Europeans began to settle the territory of
Australia, their cooking techniques and some imported ingredients were
combined with the native foods favored by the Aborigines. For decades, the
European settlers tried to convince—or force—the Aborigines
to adopt the European way of life, especially in customs of food, housing,
clothing, and education. The most drastic example of this is something the
government did for approximately 150 years, ending in the early 1970s. The
Australian government enacted programs to remove Aboriginal children from
their homes and place them with families of European descent. The
government hoped the Aboriginal children would replace their own
traditional customs with the European customs of the majority population.
But by the end of the twentieth century, the Australian government took
action to recognize the Aboriginal way of life and to restore their
property rights.

3 FOODS OF THE ABORIGINES

The Aborigines ate simple, balanced diets prior to the arrival of the
Europeans in the late 1700s. Their diets contained meat and fish, as well
as fruits, vegetables, and nuts. Honey was a popular sweetener, gathered
from the hives of native bees found among the rocky crevices or in muddy
riverbanks. Aborigines used many different ways to find the beehives.
According to legend, an Aborigine hunter would catch a bee, and carefully
attach something, such as a tiny fragment of a feather or a blade of
grass, to it. This would help the tracker see the bee, and would also slow
its flight slightly. The hunter would follow the bee back to its hive.

Native plants and animals the Aborigines ate became known as

—bush is the term Australians use for natural territory or
wilderness, and tucker is another name for food). Bushfoods—native
and wild foods—became a national industry in Australia in the early
1980s. There were bushfood restaurants, growers, and packagers of the
popular native Australian foods. This industry expanded well beyond the
early bushfood industry—macadamia plantations—of the late
1800s.

varies depending on the region, climate, and season. Kangaroo, emu, and
possum are available all year round and are popular meat choices among the
Aborigines. Other meats, such as lizards, frogs, and turtles, are most
often enjoyed during the summer. Seafood is also a common meal,
particularly in communities along the seacoast. In the mountains of New
South Wales, the Aborigines may feast on moths, which are rich in fat. The
deserts of central Australia are home to witchety grubs (larvae) found in
the roots of acacia bushes. The larvae, which are high in calories,
protein, and fat, were once staples in the Aboriginal diet. Other insects
in the traditional Aboriginal diet are bees, ants, and termites. Native
edible plants include yams, onions, spinach, tomatoes, berries, and grass
seed. Roots of some other native plants are also harvested to eat. Seeds
and flowers of the acacia were ground to make a kind of flour that could
be mixed with water to make a simple cake.

Probably the most widely recognized

, a simple type of bread made of water and flour. Although the Aborigines
originally baked this bread, it was the Europeans that gave it the name

. Billy tea, named for the "billy" (pot) with a handle that
is used for cooking over an open fire, is also popular. The billy is used
to boil water for tea. Billy tea is now enjoyed by all Australians, both
Aborigines and Europeans alike. When a sweet drink is desired, the water
is sweetened with either honey or nectar collected from flowers. Some
people also enjoy billy tea prepared according to the European custom of
adding milk and sugar to the brewed tea, just before it is drunk. 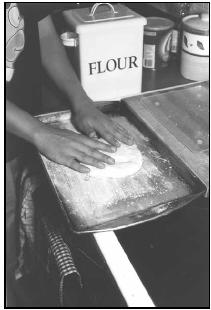 To make Damper (European Style), shape dough into a large flat
circle on a greased and floured baking sheet.

Australia's national Journey of Healing Day, better known as Sorry
Day, is probably the most significant modern national holiday for the
Aborigines. In the 1970s, the government recognized that forcing the
European lifestyle upon the Aboriginal people was wrong. It declared May
26 as "Journey of Healing Day" when all citizens celebrate
Aboriginal culture and customs. The celebration includes parades, public
speakers, and other festivities. Aborigines often use this day to show off
some of their best native cuisine.

For Aborigines, food is closely associated with spirituality. They believe
that everything living, including humans, was created by great spiritual
beings. A key part of their spirituality is

a belief that the great spirits live on in nature and through rituals.
They believe that the spirits do not want them to eat certain foods.
Customs of hunting, gathering, preparation, and cooking evolved through
their religious beliefs. Each person feels a connection between himself or
herself and a particular plant or animal. This special plant or animal is
known as the person's

. Many people do not kill or eat their totems, except during special
ceremonies. 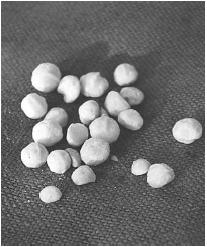 Macadamia nuts from native trees were gathered by the Aborigines
when they lived solely in outlying areas of Australia.

Historically, Aboriginal males were responsible for hunting most animals,
including birds, various seafood, and kangaroo. Larger animals, such as
the kangaroo that is more challenging to catch, were often hunted by
groups of hunters. Men used spears, harpoons, nets, traps, clubs, and even
boomerangs for hunting wild creatures. Women tended to be responsible for
the gathering of plants, shellfish, and insects. These gender roles
continue today in traditional Aboriginal families.

Even when plants are plentiful, the Aborigines are careful not to waste.
They use all parts of the plants, including seeds, roots, stems, leaves,
and fruits. However, many plants require special preparation. Some are
poisonous, others are tough, covered with prickly foliage, and most
require washing, pounding, or grinding before they can be boiled in water.

Food preparation methods differ among regional groups, often depending
upon climate. Food has often been cooked in the smoldering ashes remaining
after a fire. Alternatively, food may be placed directly on top of glowing
coals, boiled in water, or steamed in an oven-like pit in the ground. In
the twentieth century, some Aborigines began to use modern products (such
as aluminum foil) in traditional cooking techniques such as steaming. The
billy (pot) introduced by Europeans is widely used by Aborigines to make
cooking easier.

Historically, Aborigine children had to begin caring for themselves at an
early age. Most were given their first small spear before age four or
five. Sons would follow
their fathers to watch how they hunted and made tools. Daughters would
learn how to gather foods and prepare meals from their mothers. Some
Aboriginal families continue to follow the occupations of their parents.

At the beginning of the twenty-first century, nearly 400,000 Aborigines
lived in Australia. Unfortunately, many of them are poor. Low incomes and
living in isolated areas make it difficult for them to purchase food.
Because of the cost to ship food to isolated areas, food sometimes costs
almost twice as much in an outlying area than in densely populated urban
regions. The long shipping distance may also cause fresh fruits and
vegetables to spoil. As a result, rural community stores often carry
convenience foods and pre-packaged processed foods. Such foods are often
higher in fat, sugar, and salt. These foods may last longer on shelves,
but sometimes lack nutrients that are needed for a healthy life.

The Aborigines use a type of boomerang that is different from the modern
"returning boomerang" that is popular in modern-day
Australia. When an Aborigine hunter throws a "non-returning
boomerang," he uses a spinning motion. The boomerang hits the
target with more force than a stick or rock. Many Aborigines also use
the boomerang to scrape animal hides (and for other scraping tasks) and
to start fires. Children use them as toys.

With the majority of income being spent on purchasing food, less money is
available for Aborigines to spend on utilities, such as electricity, gas
and water for cooking, and refrigeration for storage. Convenience foods
that do not require much preparation are favored over healthier foods. As
a result, Aboriginal children and adults have a higher rate of
health-related problems than other Australians. Poorer diets lead to a
higher rate of obesity, diabetes, and heart disease.

The Multicultural Cookbook for Students