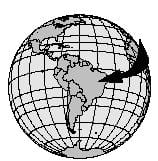 
Brazil is the largest country in South America, and the fourth-largest
country in the world. It lies on the East Coast of South America. Because
Brazil lies in the Southern Hemisphere, the seasons are reversed from
those in North America: the winter months are May through August, and the
warmest summer month is January. The mighty Amazon River, the
world's second-longest river after the Nile in Egypt, flows across
northern Brazil. The area around the Amazon River is known as one of the
world's largest rainforests. About one-fourth of all the
world's known plants are found in Brazil. In the latter part of the
1900s, logging and other commercial industries were damaging the
rainforest of Brazil. Dozens of animal and plant species became extinct in
Brazil during the 1900s. The destruction of the rainforest environment has
slowed a little, however. Brazil's soil is not fertile enough for
agriculture in most areas, but it does produce large quantities of cocoa
(it ranks third in cocoa production after Cote d'Ivoire and Ghana,
both in Africa). River water that flows near cities is polluted by
industrial waste.

Brazil is a large country that is made up of many different cultures. Each
region has a different food specialty. The Portuguese arrived in Brazil in
1500 and brought their tastes and styles of cooking with them. They
brought sugar, citrus fruits, and many sweets that are still used for
desserts and holidays. The Brazilian "sweet tooth" was
developed through the influence of the Europeans. Brazilians use many
eggs, fruits, spices (such as cinnamon and cloves), and sugar to make
sweet treats, such as ambrosia. They also use savory (not sweet)
seasonings such as parsley and garlic. Other nationalities that settled in
Brazil were Japanese, Arabs, and Germans. More than one million Italians
had migrated to Brazil by 1880. Each immigrant group brought along its own
style of cooking.

Long before the Europeans arrived, however, the Tupí-Guaraní and
other Indian groups lived in Brazil. They planted

, ground manioc, which is similar to fine breadcrumbs. It is toasted in
oil and butter and sprinkled over rice, beans, meat, and fish. As of 2001,

was still used as the Brazilians' basic "flour" to
make cookies, biscuits, and bread.

3 FOODS OF THE BRAZILIANS

Rice, black beans, and manioc (a root vegetable like a potato) are the
main foods for many Brazilians. The national dish is 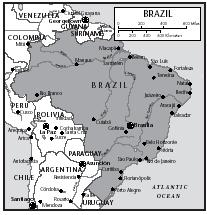 , a thick stew of black beans and pieces of pork and other meats. It is
usually served with orange salad, white rice,

(kale), a dark green leafy vegetable that is diced and cooked until
slightly crispy.

This salad offers sweet, salty, spicy, and tart tastes in one dish.
The fresh orange slices are sprinkled with salt, pepper, and sugar.

Almost every kind of fruit grows in Brazil, including apples, oranges,
peaches, strawberries, bananas, papayas, mangoes, and avocados. Fruits,
vegetables, meat, and flowers are sold at

, chunks of beef cooked on a metal skewer over hot coals, is another
favorite. Sometimes the beef is soaked in a mixture of vinegar, lemon
juice, and garlic before cooking. This "Brazilian barbecue"
is served with rice, potato salad,

(cowboys) living in the region of Rio Grande do Sul especially 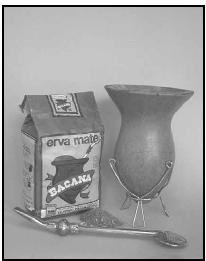 Maté, an herbal tea-like beverage, is enjoyed in many parts of
South America. The cup, made from a hollowed-out gourd, and metal
bombilla (straw) are carried by gaúchos, hanging from their
belts.

. After the gaúchos eat their meal, they drink

(an herbal tea drunk in many parts of South America). The tea leaves are
placed inside a hollowed-out gourd, and then boiling water is poured over
them. Gaúchos slowly sip the

through a metal straw, called a

with a strainer on the lower tip of it. The gourd and straw are carried,
hanging from the belt.

Another popular beverage is guaraná, made from a small red fruit that
is high in caffeine and grows in the Amazon River area. It is a refreshing
soft drink, unique to Brazil and with a taste some describe as similar to
creme soda. People in the Amazon River area also chew the guaraná
seeds, or make a drink by dissolving a powder made from the seeds in
water. Powdered guaraná is available in the United States in some
health food stores, or in markets specializing in foods from South
America.

4 FOODS FOR RELIGIOUS AND HOLIDAY CELEBRATIONS

Although Brazil has no national religion, the Portuguese who arrived in
Brazil in 1500 brought their Roman Catholic religion with them. About 75
percent of Brazilians consider themselves Roman Catholic. Those who do not
follow the Roman Catholic religion still enjoy the world-renowned
Brazilian Carnival tradition. During Carnival, colorful parades are held
on the streets, and
children and adults dress in costumes, dancing and celebrating in the
streets all day and all night. People eat and drink continuously during
Carnival, enjoying spice dishes, such as pepper-scented rice and feijoada,
and sweets. Carnival is a week-long party that ends on Ash Wednesday, the
beginning of the 40-day religious period of Lent before the Christian
celebration of Easter. During Lent, it is a Roman Catholic tradition not
to eat meat.

(June Festivals) are held in honor of Roman Catholic saints—St.
Anthony, St. Peter, and St. John. Brazilians believe St. John protects the
corn and green bean harvests, giving them plenty of food in the upcoming
year. They celebrate St. John's Day with a harvest festival.
Brazilians like to eat corn, as corn-on-the-cob and popcorn, and
corn-based dishes such as corn puddings and corn cake, at all of the

Brazil is the world's largest producer of coffee, and Brazilians
use coffee in many unique ways in cooking. For example, on Christmas Day,
Brazilians prepare a turkey
basted with a rich dark coffee with cream and sugar. The traditional
stuffing contains

(fried bananas), and green beans. Dessert is an assortment of fruit

Because Brazil is the world's largest producer of coffee, a typical

(breakfast) consists of a cup of

(a hot milk and coffee mixture) and a piece of French bread. Many
Brazilian children also drink a coffee and milk mixture for breakfast.

Lunch, usually the biggest meal of the day, consists of rice, beans,
salad, meat, or other dishes, depending on where the family lives and what
they can afford to buy. Between lunch and supper some Brazilians have
midmorning and midafternoon

, little pastries filled with any combination of shrimp, meats, and
cheeses that are either fried or baked, are a favorite snack. These can be
purchased by street vendors (Brazilian "fast food") or made
at home.

In the late evening, many Brazilians eat a light supper. Children enjoy
desserts such as

The Portuguese brought oranges and other citrus fruits to Brazil in 1500,
and they are used in several dishes and juices. Students may enjoy a
fruity drink, such as pineapple-orange drink, as an after-school snack.

This drink can also be made quickly in a blender. Serves 1 or 2.

(coconut and cheese snacks) to school as part of their lunch. These
treats do not need to be heated and, if stored correctly, they stay fresh
for several days. 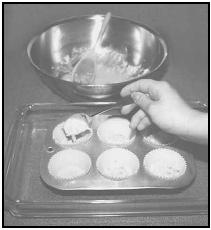 Drop the coconut-cheese mixture by spoonful into baking cups. 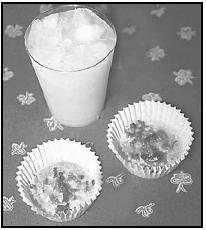 About 10 percent of the population of Brazil is classified as
undernourished by the World Bank. This means they do not receive adequate
nutrition in their diet. Of children under the age of five, about 6
percent are underweight, and over 10 percent are stunted (short for their
age).

According to the Brazilian government, child poverty is one of the
country's most serious concerns. About one-third of the children in
Brazil live in poverty. Thousands of children spend their days on the
streets of Brazil's cities; many abuse drugs and resort to crime
and prostitution to get money to live. Many shopkeepers consider these
street children a nuisance and ask police to keep the children away from
their stores. International observers consider the child poverty in Brazil
to be a human-rights issue, but many Brazilians see the children as a
threat to security in the cities.