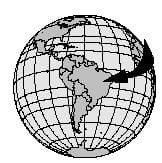 
The majority of Afro-Brazilians live in the nine states of the
country's northeastern section—home to nearly one-third of
all Brazilians. Most Afro-Brazilians live near the coastal regions where
there is an abundance of rainfall. The northeast states have three
distinct areas. The flat coastal strip, which literally meals
"forest zone," has rich soil that is suitable for the
cultivation of sugarcane plantations. Vast hills and mountain ranges begin
just miles from the fertile coastline. Highland shrubs and cacti grow here
in large numbers. Lastly, the semi-arid interior covers nearly
three-quarters of the northeast's area (however, the least amount
of people live in this topographic region—mostly those of
Portuguese or Indian descent). Soil quality is poor and rainfall is often
unpredictable.

The Portuguese claimed the rights to the territory that makes up
modern-day Brazil in 1500, and in 1532, they began bringing African slaves
to Brazil. The Africans introduced the Brazilians to new cooking styles
and tastes, such as cooking food in

(palm oil), using okra as a thickener and a vegetable, and using the
banana in different dishes. Africans also introduced a wide variety of
chili peppers and ginger to season food, and this practice has continued
to be part of Brazilian cooking. Another cooking technique Africans took
to Brazil was the use of dried smoked fish and shrimp. The oldest African
dish in Brazil,

, dates back to the 1600s. It is a spicy stew made with smoked fish or
shrimp,

(palm oil), and peppers. In the twenty-first century, the African
influence on ingredients and cooking techniques
still thrives, especially in the northeastern state of Bahia.

3 FOODS OF THE AFRO-BRAZILIANS

Most of the descendents of the African slaves, who were brought to Brazil
by the Portuguese in the 1500s, live in the state of Bahia. Although
Afro-Brazilian cuisine can be seen throughout Brazil, it is especially
noticed in Bahia, where the people have kept the culture, food, and

is one of the most popular Bahian dishes. It is a creamy dish served over
rice, 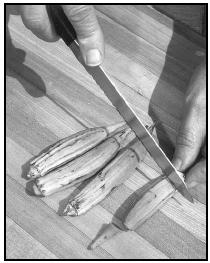 The tops and pointy tips (tails) of okra may be trimmed using clean
scissors or a knife.

, and bread. Another favorite dish is

, a stew made with fish, shrimp, crab, or a mixture of seafood in a

is usually served over white rice.

Afro-Brazilian cuisine is well known for its sweets and desserts, probably
because of the influence of the Portuguese colonists who brought their
love of sugar with them from their European homeland. The African slaves
added their own style to the existing recipes. The women of the state of
Bahia, the heart of Afro-Brazilian culture, make delicious sweets. One
favorite is

a coconut candy boiled in sugar water with ginger or lemon.

(coconut macaroons) are another favorite sweet.

are often served for dessert. The African slaves transported to Brazil by the Portuguese brought their
religion with them. The religion of the modern-day Afro-Brazilians,

is a blend of the
Roman Catholicism of the Portuguese, and African religions.

are similar to Catholic saints. Each has a distinct name and a favorite
food. People who follow the

religion eat meals made from the saint's favorite food on the day
that saint is celebrated.

, the goddess of the ocean, is honored on February 2 of each year, and her
favorite food is watermelon. Fishermen believe she protects them when they
are out at sea, and that she will send large schools of fish for them to
catch.

(Jesus Christ), father of all

is honored at the

festival, held each year on the third Thursday in January. Since black
beans are thought to be

favorite food, many dishes for the festival are made with them.

(June Festivals) are held in honor of certain

(the Catholic names for them are St. Anthony, St. Peter, and St. John).
Corn, prepared in different ways, is eaten at all of the June Festivals,
including puddings and cakes. One popular cornmeal dish, similar to
polenta, is

The heart of Afro-Brazilian culture, practiced by descendents of the
African slaves brought to Brazil by the Portuguese, is in the state of
Bahia in northeastern Brazil. A large percentage of the people living in
these regions are poor. Afro-Brazilians usually eat foods that come from
their surroundings, such as fruit and seafood. Other foods are bought at
large produce markets in towns or from farms. Breakfast includes papayas,
mangoes, pineapples, warm tapioca with milk and cinnamon, and coffee.
Favorite snacks are

, little pastries filled with meat or fish and olives and cheese.

Along with other foods, street vendors (the equivalent to "fast
food") sell the popular snack

(steamed rice-flour pudding). It is prepared, wrapped in banana leaves,
and steamed. In homes,

is often eaten as a side dish with seafood meals.

A popular dinner is

(chicken with peanuts and cashews) is another well-known dish. Sorbet, or
passion fruit-, mango-, lime-, or burnt coconut-flavored ice, is a
favorite dessert. Another popular dessert, which has been made for many
years, is

(mother-in-law eyes). These are actually prunes stuffed with coconut, but
they look like eyes. 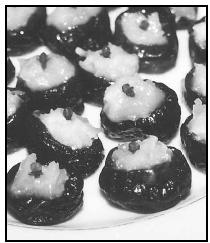 The sweet treats, Olho de Sogra (Mother-in-law Eyes), may be enjoyed
anytime. Some people may prefer not to eat the whole clove in the
center.

Living conditions for Afro-Brazilians are often dreadful, with an
overwhelming number living in

, or slums. An estimated 69 percent of the population has no public
sanitation, 63 percent does not have access to safe drinking water, and
nearly 400,000 die of curable diseases each year due to poor health
facilities. In addition, the Brazilian infant mortality rate, especially
that of Brazilian children of African ancestry, is one of the highest in
the world. Apparent discrimination of Afro-Brazilians has kept most
uneducated, illiterate (unable to read), and living in poverty. Many
Afro-Brazilians cannot afford the fresh and nutritious foods available to
other Brazilians. According to the World Bank, those living in the
impoverished areas of Brazil's northeastern states only make about
one-tenth of the national average (approximately $230 each year).