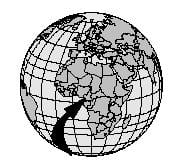 
Situated in West Africa, Cameroon, shaped like an elongated triangle,
contains an area of 475,440 square kilometers (183,568 square miles).
Comparatively, the area occupied by Cameroon is slightly larger than the
state of California.

There are four geographical regions: the western lowlands, which extend
along the Gulf of Guinea coast; the northwestern highlands, which consist
of forested volcanic mountains, including Mount Cameroon, the
nation's only active volcano and the highest peak in West Africa;
the central region, which extends eastward to the border with the Central
African Republic; and the northern region, which is essentially a vast
tropical plain that slopes down to the Chad Basin.

The southern and northern regions of the country are two distinct climatic
areas. In the south there are two dry seasons, December to February, and
July to September. The northern part of the country has a more comfortable
climate.

Many staples of the Cameroonian diet came from the explorers of the New
World (the Americas). The Portuguese arrived in Cameroon in 1472 and
brought with them such foods as hot peppers, maize (corn), cassava (a root
vegetable), and tomatoes.

Other Europeans settled on the Came-roon coast in the mid 1800s, with the
British arriving first, followed by the French and Germans. The French
influence is reflected in the presence of some foods, such as omelets and
French bread, as well as in the preparation of some dishes; however, for
the most part, Cameroonians continue to prepare their own traditional
foods.

Foreign restaurants can be found in the larger towns and cities of
Cameroon. In 2001, the city of Doula boasted a number of Parisian-style
cafes, Greek, Lebanese, and Chinese restaurants, as well as places
offering pizza and hamburgers. Restaurants in 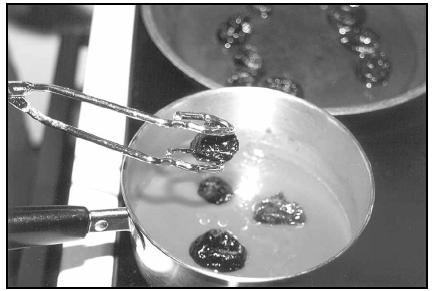 Fried prunes are simmered in a savory tomato sauce and served over
rice for a filling casual family dinner.

3 FOODS OF THE CAMEROONIANS

The staple foods eaten by the people of Cameroon vary from region to
region, depending on climate, and what is grown locally. In general, the
Cameroonian diet is characterized by bland, starchy foods that are eaten
with spicy (often very hot) sauces. Meat on skewers, fried and roasted
fish, curries and peppery soups are common dishes.

Staple foods eaten in the north are corn, millet, and peanuts. In the
south, people eat more root vegetables, such as yams and cassava, as well
as plantains (similar to bananas). In both north and south regions, the
starchy foods are cooked, then pounded with a pestle (a hand-held tool,
usually wooden) until they form a sticky mass called

(or foofoo), which is then formed into balls and dipped into tasty
sauces. The sauces are made of ingredients such as cassava leaves, okra,
and tomatoes. The food most typical in the southern region of Cameroon is

, which is made of boiled, shredded bitterleaf (a type of green), peanuts,
and melon seeds. It is seasoned with spices and hot oil, and can be cooked
with fish or meat.

, made of fermented cassava shaped in a loaf, is popular in both the south
and central regions.

Fresh fruit is plentiful in Cameroon. The native mangoes are especially
enjoyed. Other fruits grown locally and sold in village marketplaces
include oranges, papayas, bananas, pineapples, coconuts, grapefruit, and
limes. 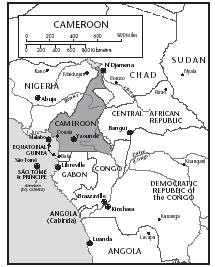 
This is a good recipe to make with a friend, so you can share the job of
stirring the stiff mixture and holding the pot steady. Neither the
ingredients nor the process is authentic, but the results are similar in
texture to the fufu prepared in Cameroon from cassava. Cassavas resemble sweet potatoes, but have a shiny, brittle skin.
Pictured with the cassavas here is a bag of gari (or cassava meal),
which may be used to make fufu. 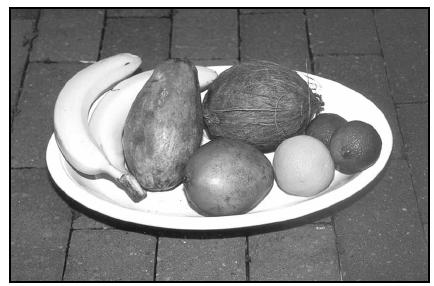 During the month long observance of the holiday of Ramadan,
Cameroon's Muslims fast from dawn to dusk. This means they are
forbidden to eat or drink during this time. The evening meal during
Ramadan may include a rich soup. In most areas, a

festival is celebrated two months after Ramadan to remember the
willingness of Abraham to sacrifice a sheep from his flock. This
celebration lasts for several days, during which it is customary for
people to slaughter a sheep and then visit their friends and neighbors,
giving them gifts of meat.

Most Cameroonians celebrate Christmas, even those who are not Christian.
It is a time for visiting friends and family, and exchanging gifts.
Holidays and events, such as coronations; saying goodbye to someone going
abroad; weddings, and even funerals, are marked by feasts and meals at
which friends and neighbors gather to eat local favorite dishes. It is
traditional to slaughter and cook a sheep or goat at important occasions.
Chicken dishes are also popular holiday fare.

At mealtime, damp towels may be passed out to diners (before and after the
meal), to wash their hands; Cameroonians eat out of communal bowls. Using
their right hands, they dip three fingers into the starchy
food—often

or a millet dish—and then into the stews or sauces of the meal. It
is customary for the men to serve themselves first, while the women wait
patiently and the children eat what is left after the adults have
finished.

People of Cameroon eat three meals a day. A variety of foods, including
fruit, porridge, and boiled plantains, may be eaten for breakfast. Eggs
and boiled cassava are also popular choices. Lunch and dinner are likely
to feature a starchy dish such as

, boiled cassava, rice or millet, generally served with a vegetable soup
or a hearty stew.

, for example, can take days. The cassava or yams must be boiled and
pounded into a pulpy mass. The preparation of

from powdered starch or rice is less complicated, but still requires
much stirring. Cooking in the villages generally takes place over wood or
charcoal fires, with iron pots and wooden spoons. In towns, canisters of
propane may be used to power gas stoves. Even at the beginning of the
twenty-first century electricity is seldom available for cooking use
except in the largest cities.

The government has tried for years to improve nutrition and health care,
but there is a shortage of doctors and medical supplies, so the life
expectancy is just about fifty years. Less than half the children receive
immunization against common diseases such as tuberculosis, polio, and
measles.

Families spend about one-third of their income on food—mostly on
plantains, cassava, corn, millet, and small amounts of meat. Peanuts,
called groundnuts, are an important source of protein.

The Rough Guide to West Africa

Cassava, plantain, and other ingredients can be found in the produce
section of larger grocery stores, as well as in Asian and African
specialty stores in many areas of the United States.