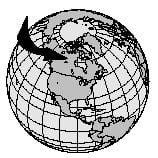 
The phrases "Native Canadians" or
"Aboriginals" describe the descendants of the people who
were living in what is modern-day Canada before European colonists,
explorers, and traders arrived in the 1600s. Giving labels to these groups
is complicated by emotional and historical issues. Aboriginals inhabited
all regions of Canada and the United States, and dozens of tribal groups,
lived, hunted, fished, and foraged (gathered native plants) all across
North America. The provinces of modern-day Canada obviously did not exist
when the Europeans arrived on the east coast of Canada.

The Inuit inhabit the northernmost parts of Canada. On April 1, 1999,
Nunavut (pronounced NOON-ah-voot) became Canada's newest territory,
created from about half the land that made up the Northwest Territories.

In general, most Canadians agree that the approximately 800,000 Aboriginal
Canadians counted by the 1996 Census of Population may be identified as
belonging to one of three groups: First Nations (554,000), Métis
(210,000), and Inuit (Innu, 40,000). The First Nations people are members
of the approximately 50 recognized "First Nations" or tribal
groups in Canada, and they inhabit all parts of Canada. The Métis are
descendants of the intermarriages that occurred between the men employed
by the early European fur trading companies (Hudson's Bay Company
and Northwest Fur Company) and Native Canadian women.

The Inuit are the descendants of the Thule people who migrated from the
Canadian arctic 700 to 800 years ago. They have been inhabiting the
territory of modern Canada for thousands of years. They were historically
hunters and fishers. Because of the 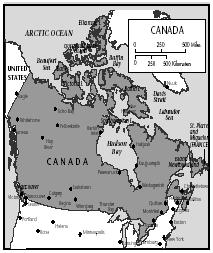 harsh climate of their northern homelands, the Inuit diet included very
few fresh vegetables or fruits. In the short summers, they would gather
berries, both for eating fresh and for drying to eat during the long, cold
winter. They would also gather seeds and nuts to store to supplement the
winter diet. Grains such as corn, wheat, and wild rice were harvested and
dried. Grains would sometimes be ground to produce flour, or mixed with
water and cooked.

Pemmican is a nutritious, high calorie food that can be prepared in
quantities and stored. The French and English explorers, trappers, and
traders, bought large quantities of pemmican from the Aboriginals, and
even learned to make pemmican. Pemmican would be sealed inside an animal
skin or stomach cavity to preserve it. Europeans carried these pemmican
stores on long furtrading expeditions.

The traditional diet of Aboriginal people was made up of the animals and
plants found on the land and in the sea around them. Seal, whale, buffalo,
caribou, walrus, polar bear, arctic hare (rabbit), all kinds of fish and
many species of bird were hunted or fished. Raw blubber (fat) was enjoyed
or mixed with meat or berries. Every part of the animal was consumed or
used to make clothing or shelter. Because the foods were eaten raw or with
minimal processing, the
Aboriginal people were generally well nourished.

Modern-day First Nations, Métis, and Inuit people have added
processed foods and convenience foods to their traditional diet, and are
experiencing the health problems that come from consumption of foods rich
in sugar and additives (such as tooth decay and obesity).

Their traditional diet was nutritious and high in calories, but the
calories were needed to help keep their bodies warm through the long,
frigid winters. During the short summers, Aboriginals (mainly the women)
would plant small gardens and gather wild berries and seeds. Corn, beans,
and squash were common vegetables grown in the small gardens of Manitoba
and Alberta. These vegetables were often simmered to make soups or stews,
such as Three Sister Soup (the "sisters" are corn, beans,
and squash).

Snacks were often enjoyed right on the trail—a few berries or dried
seeds plucked from the wild plants. Some were eaten right on the spot, and
some may have been carried home to share or save for another day.


Saskatoon berries, similar to blueberries, have been picked and eaten in
the wild by Aboriginal Canadians for centuries. In the late twentieth
century, commercial fruit growers began planting crops of these tasty
berries to sell to grocery stores.

Aboriginal peoples who lived on the prairies of western Canada consumed
buffalo (and used buffalo skins for clothing and shelter). In central
Canada, Ojibwa people would gather wild rice from the waters of Ontario
and Manitoba, allowing it to dry and then roasting it. The fur traders,
who came into contact with Aboriginal peoples all across Canada,
introduced a bread similar to the Scottish scone. It became known as

. Bannock may be baked (Aboriginal people would lay it on hot rocks near
a campfire) or twisted onto a stick and cooked over hot coals.


Bannock may be baked in the oven or over a charcoal or open fire (recipe
for Bannock on a Stick follows).

Bannock on a Stick

Wild rice, called Man-O-Min by the Ojibwa of central Canada,
quadruples in size when cooked.

Aboriginal peoples living in the region of modern-day British Columbia
enjoyed foods such as salmon cooked over an open fire, a popular
modern-day delicacy.

The traditional feasts held by Aboriginal peoples usually revolved around
a harvest, or seasonal excess of food. For example, if there was a large
salmon catch, a feast would be held. When a youth killed his first seal or
caribou, a celebration feast might be held.

to celebrate the birth of a child, a young woman reaching puberty, or the
marriage of a son. Modern-day potlatches are held to celebrate and
preserve Aboriginal culture.

In 1996 an annual National Aboriginal Day was proclaimed, to be celebrated
on June 21 each year. There is no specific menu associated with the
celebration of this holiday, but many traditional foods, such as salmon,
wild rice, and even buffalo, are enjoyed during the festivities staged by
many of the Aboriginal groups.

Serves 12; may be served hot or at room temperature.

Aboriginal peoples are hospitable, and always have stews or teas simmering
and available to serve to guests. Historically, cooking utensils were
fashioned from natural materials and cooking was done over an open fire.
Food preservation methods included smoking, drying, and encasing in melted
animal fat or whale blubber.

The substitution of packaged and fast foods for the nutrient-rich
traditional Aboriginal diet has contributed to health problems among
Aboriginal children.

The Canadian Government's Minister of Indian Affairs and Northern
Development continues to work to address the concerns of the Aboriginal
peoples. Addressing historic wrongs and developing modern-day programs is
challenging, and representatives of the government and the First Nations,
Métis, and Inuit peoples are striving to communicate and design goals
to meet the needs of all Canadians.

What Do We Know About the Inuit.

Arctic Memories: Living With the Inuit.

Children of the Fur Trade: Forgotten Métis of the Pacific
Northwest.