Chinese cuisine is an important part of Chinese culture, which includes cuisine originating from the diverse regions of China, as well as from Chinese people in other parts of the world. Because of the Chinese diaspora and historical power of the country, Chinese cuisine has influenced many other cuisines in Asia, with modifications made to cater to local palates. Chinese food staples such as rice, soy sauce, noodles, tea, and tofu; and utensils such as chopsticks and the wok can now be found worldwide.

The preference for seasoning and cooking techniques of Chinese provinces depend on differences in historical background and ethnic groups. Geographic features including mountains, rivers, forests and deserts also have a strong effect on the local available ingredients, considering climate of China varies from tropical in the south to subarctic in the northeast. Imperial, royal and noble preference also plays a role in the change of Chinese cuisines. Because of imperial expansion and trading, ingredients and cooking techniques from other cultures are integrated into Chinese cuisines over time. 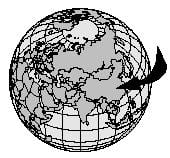 The official name of China is the People’s Republic of China. Eastern China is made up of lowlands, whereas the middle and western sections of the country are mountainous. The largest river in China is the Yangtze, which travels almost 4,000 miles. Water pollution is a problem in China, but most Chinese people have access to safe drinking water.

About two-thirds of the population lives outside of the cities, but there are many people living in cities, too. More than sixty cities have populations over 750,000. Shanghai has over 14 million people, and Beijing has over 12 million. (To compare to U.S. cities: New York City has about 16 million people, Los Angeles has about 13 million, and Chicago has about 7 million.)

Throughout its history, China’s growing population has been difficult to feed. By A.D. 1000, China’s population reached 100 million (more than one-third of the U.S. population in 2000). The Chinese constantly had to adapt new eating habits because of the scarcity of food. Meat was scarce, so dishes were created using small amounts of meat mixed with rice or noodles, both of which were more plentiful. Vegetables were added, and stir-frying, the most common method of cooking, became a way to conserve fuel by cooking food quickly.

Regional differences in cuisine became noticeable in the 1200s when invaders from neighboring Mongolia swept into China. Cooking styles and customs began to be exchanged between the two countries. As people traveled further from their homes, cooking methods and foods were shared among the different
regions within China. 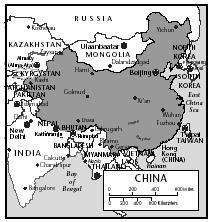 3. FOODS OF THE CHINESE

The Chinese eat many foods that are unfamiliar to North Americans. Shark fins, seaweed, frogs, snakes, and even dog and cat meat are eaten. However, the Chinese follow the spiritual teaching of balance signified by yin (“cool”) and yang (“hot”). This philosophy encourages the Chinese to find a balance in their lives, including in the foods they eat. While preparing meals, the Chinese may strive to balance the color, texture, or types of food they choose to eat.

Rice is China’s staple food. The Chinese word for rice is “fan” which also means “meal.” Rice may be served with any meal, and is eaten several times a day. Scallions, bean sprouts, cabbage, and gingerroot are other traditional foods. Soybean curd, called tofu, is an important source of protein for the Chinese. Although the Chinese generally do not eat a lot of meat, pork and chicken are the most commonly eaten meats. Vegetables play a central role in Chinese cooking, too.

There are four main regional types of Chinese cooking. The cooking of Canton province in the south is called Cantonese cooking. It features rice and lightly seasoned stir-fried dishes. Because many Chinese immigrants to America came from this region, it is the type of Chinese cooking that is most widely known in the United States. Typical Cantonese dishes are wonton soup, egg rolls, and sweet and sour pork.

The Mandarin cuisine of Mandarin province in northern China features dishes made with wheat flour, such as noodles, dumplings, and thin pancakes. The best known dish from this region is Peking duck, a dish made up of roast duck and strips of crispy duck skin wrapped in thin pancakes. (Peking was the name of Beijing, the capital of China, until after the Cultural Revolution of the late 1960s. This traditional recipe is still known in the United States as “Peking duck.”) Shanghai cooking, from China’s east coast, emphasizes seafood and strong-flavored sauces. The cuisine of the Szechuan province in inland China is known for its hot and spicy dishes made with hot peppers, garlic,
onions, and leeks. This type of cooking became popular in the United States in the 1990s.

Tea, the beverage offered at most meals, is China’s national beverage. The most popular types of tea—green, black, and oolong—are commonly drunk plain, without milk or sugar added. Teacups have no handles or saucers. 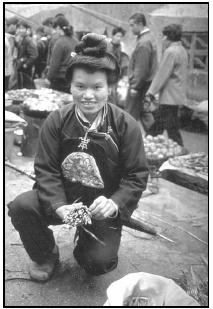 A young Chinese vendor, with her hair styled in an elaborate bun, prepares vegetables to sell. All styles of Chinese cooking use fresh vegetables. 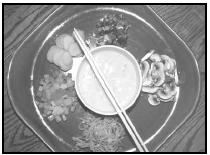 Although day-to-day cooking in China is quite simple, elaborate meals are served on holidays and festivals. A typical holiday meal might consist of steamed dumplings, suckling pig (or a spicy chicken dish), and a selection of desserts. Unlike in the United States, desserts are generally reserved for special occasions only. Most ordinary meals end with soup.

The most important festival of the year is the Chinese New Year, which is set according the phase of the moon, and falls in January or February. Oysters are believed to bring good fortune and have become a traditional food for dinners celebrating the New Year. Oranges and tangerines (for a sweet life), fish (symbolizing prosperity), and duck are also eaten. Dumplings are commonly eaten in the north. Neen gow, New Year’s Cake, is the most common dessert. Each slice of the cake is dipped in egg and pan-fried. A special rice flour makes the cake slightly chewy.

Buddha Jumps Over the Wall (feast dish with as many as 30 main ingredients; takes up to 2 days to prepare)

Another important holiday is the Mid-Autumn Festival in September. To celebrate this festival, which occurs during the full moon, the Chinese eat heavy, round pastries called mooncakes. They are filled with a sweet paste and sometimes have an egg yolk in their center. Other foods eaten at this time are rice balls and a special cake called yue bing.

After a baby is one year old, the Chinese only celebrate birthdays every ten years, starting with the tenth birthday. The Chinese eat noodles on their birthdays. They believe that eating long noodles will lead to a long life. Another traditional birthday food is steamed buns in the shape of peaches, a fruit that also represents long life.

To make Almond Cookies, press a whole almond into the center of each dough ball.

Togetherness and cooperation is reflected in China’s mealtime customs. A dish is never served to just one person, either at home or in a restaurant. Each person has his or her own plate, but everyone at the table shares food. Instead of a knife and fork, the Chinese eat with chopsticks, a pair of wooden sticks held in one hand. Food is cut into bite-size pieces while it is being prepared, so none of it has to be cut at the table. It is considered good manners to hold a bowl of rice up to your mouth with one hand.

Chopsticks, held in the other hand, are used to help scoop the rice into the person’s mouth. Drinking soup directly from the bowl is also an acceptable custom. It is rude, however, to leave
chopsticks sticking straight up in a bowl of rice.

A typical family dinner consists of rice or noodles, soup, and three or four hot dishes. At a formal dinner, there will also be several cold appetizers.

A well-known type of Chinese snack is called dim sum (“touch of heart”). These are bite-size foods served with tea in midmorning, afternoon, or at night. Typical dim sum are filled dumplings, shrimp balls, and spring rolls (also called “egg rolls” in the U.S.). Wontons, which can be boiled in soup, are also served fried as dim sum.

The rapidly growing population in China has been difficult to feed throughout history. About 13 percent of the total population in China is undernourished according a report issued by the World Bank in 2000. This problem is most significant away from coastal areas. People living in inland areas are more likely to be poor and to have a diet lacking in adequate nutrition. About 17 percent of children under age five are underweight.

Food and Recipes of China.

The Kids’ Multicultural Cookbook: Food and Fun Around the World.