The Republic of Côte d'Ivoire (which means "ivory
coast" in French), on the south coast of the western bulge of
Africa, has an area of 322,460 square kilometers (124,502 square miles).
Comparatively, the area occupied by Côte d'Ivoire is slightly
larger than the state of New Mexico. The greater part of Côte
d'Ivoire is a vast plateau, tilted gently toward the Atlantic,
although the Guinea Highlands (in the northwest, from Man to Odienné)
have peaks higher than 1,000 meters (3,280 feet).

The greatest annual rainfall, 198 centimeters (78 inches), is along the
coast and in the southwest. The coastal region has a long dry season from
December to mid-May, followed by heavy rains from mid-May to mid-July, a
short dry season from mid-July to October, and lighter rains in October
and November. Farther north, there is only one wet and one dry season,
with rainfall heaviest in summer.

Thousands of years prior to the arrival of the Europeans in the 1460s,
independent tribes occupied present-day Côte d'Ivoire. They
survived mostly on gathered seeds and fruits and hunted animals. Foods and
eating habits were most likely influenced by outsiders who used the land
as trade routes from as early as the 700s. Little, however, is known about
the early inhabitants.

By the late 1400s, the Portuguese began to show a significant interest in
Côte d'Ivoire. They were interested in spreading Christianity,
purchasing slaves, and discovering new trade routes. The Portuguese soon
established several trading centers along the country's coast, but
poor coastal harbors helped to spare the country from the build up of a
large slave trade. However, the 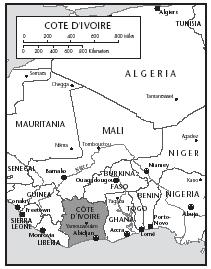 Europeans desperately sought the country's supply of ivory (from
the tusks of elephants) and gold, so trading and exploitation of these
goods continued. The country's nickname, the Ivory Coast,
originated because of the country's well-known supply of ivory. In
return for the gold and ivory, the Portuguese brought European weapons and
cassava, now a daily staple, to the Ivoirians.

By the mid-1800s, French merchants discovered the large amounts ivory and
gold that originated from Côte d'Ivoire. In exchange for money
and the promise of French protection, France was given permission to take
control of the country's coastal trade routes. With the hopes of
planting profitable cash crops (crops grown to make money), the French
began planting coffee, cocoa, and palm oil (an essential ingredient for
preparing African food) along the coast. Eventually one-third of the
cocoa, coffee, and banana plantations belonged to the French.

As a result of France's push towards a strong economy based on cash
crops, Côte d'Ivoire continued to mass-produce several crops
after gaining its independence from France in 1960. Côte
d'Ivoire is the world's leading producer of cocoa, and is
the third largest producer of coffee in the world (behind Brazil and
Columbia). More than one-quarter of the population works with the
production of cocoa. Côte d'Ivoire also became Africa's
leading exporter of pineapples and palm oil. Unfortunately, many of the
country's rainforests have been destroyed in order to plant more
cocoa (and other cash crop) plantations. Corn, rice, millet, and yams have
also thrived, but mostly as crops eaten by the people of Côte
d'Ivoire.

3 FOODS OF THE IVOIRIANS

Côte d'Ivoire's roughly 60 ethnic groups bring
diversity to the country's cuisine. Each group has developed a diet
that is suitable to their lifestyle. The Agni and Abron groups survive by
farming cocoa and coffee. The Senufo peoples live in the country's
northern savanna (treeless plain). They cultivate rice, yams, peanuts, and
millet (a type of grain). Rice with a peppery peanut sauce is often
enjoyed by the Senufo people. The Dioula of the far northwest depend on
their cultivation of rice, millet, and peanuts to survive, while the
Kulango people of the north, who are mostly farmers, grow yams, corn,
peanuts, and watermelons. Those living near the coast enjoy a wide variety
of seafood.

Despite varying diets and food customs, the people of Côte
d'Ivoire generally rely on grains and tubers (root vegetables) to
sustain their diet. Yams, plantains (similar to bananas), rice, millet,
corn, and peanuts (known as groundnuts in Africa) are staple foods
throughout the country. At least one of these is typically an ingredient
in most dishes. The national dish is

(FOO-fue), plantains, cassava, or yams pounded into a sticky dough and
served with a seasoned meat (often chicken) and vegetable sauce called

(KED-gen-ooh). As with most meals, it is typically eaten with the hands,
rather than utensils.

is most often prepared from peanuts, eggplant, okra, or tomatoes.

(AT-tee-eck-ee) is a popular side dish. Similar to the tiny pasta grains
of couscous, it is a porridge made from grated cassava.

For those who can afford meat, chicken and fish are favorites among
Ivoirians. Most of the population, however, enjoys an abundance of
vegetables and grains accompanied by various sauces. Several spicy dishes,
particularly soups and stews, have hot peppers to enrich their flavors.
Fresh fruits are the typical dessert, often accompanied by

(BAN-kee), a local white palm wine or ginger beer. Children are fond of
soft drinks such as Youki Soda, a slightly sweeter version of tonic water.

Often the best place to sample the country's local cuisine is at an
outdoor market, a street vendor, or a

, a restaurant unique to Côte d'Ivoire. These reasonably
priced outdoor restaurants are scattered throughout the country and are
growing in popularity. To be considered a

, the restaurant must sell braised food (food that has been cooked over a
low fire). The popular meats of chicken and fish are the most commonly
braised food and are usually served with onions and tomatoes. Rice,

Cassava has a glossy, brittle skin, and is typically 6 to 8 inches
long. 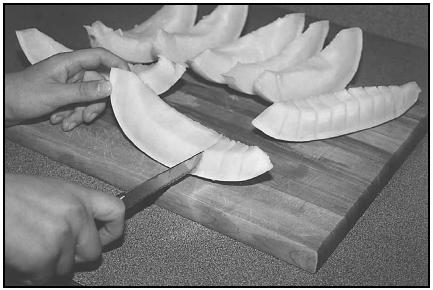 To make melon fingers, slice a honeydew melon, remove the seeds, and
make cuts across each melon slice.

Most (65 percent) of Côte d'Ivoire's population follows
traditional African religions. They honor their ancestors and believe in
the spirits of nature. Even the other two major religions of the country,
Christianity (12 percent) and Islam (23 percent), often combine
traditional practices with their faith. Some traditional religions
recognize sorcery and witchcraft, particularly those living in rural
areas.

Probably the most anticipated time of the year for Muslims (believers of
Islam) is Ramadan, a monthlong observance in which food and drink are not
consumed between sunrise and sunset.

, the feast that ends this fasting month, lasts two to ten days. The feast
may include a variety of seasoned meats with sauce, rice, yam or eggplant,
salads, and soups or stews.

(the feast of the sacrifice) starts on the tenth day of the last month of
the Islamic calendar. After prayers, the head of each household typically
sacrifices (kills) a sheep, camel, or an ox. It is often eaten that
evening for dinner and is shared with those who could not afford to
purchase an animal to sacrifice.

Christians, both Protestant and Roman Catholic, observe such holidays as
Good Friday, Easter, and Christmas. Similar to the custom of Muslims on
their special days, Christians gather with family and friends on Christian
holidays to enjoy a meal together. Cities are often decorated with bright
lights and decorations, and people gather in the streets to sell fruits
and other items.

, the Christmas Eve dinner served after midnight mass, is often considered
the most important meal of the year. A Yule log is traditionally eaten as
a special dessert.

The people of Côte d'Ivoire also celebrate secular
(nonreligious) holidays such as National Day (December 7), commemorating
the country's independence, and New Year's Day (January 1).
At the beginning of harvest time, yam festivals take place to honor the
spirits who they believe protect their crops each year. To celebrate, the
Kulango people exchange gifts and eat a meal of mashed yams and soup and
participate in dances and song. Some villagers celebrate the harvest of
other important crops, including rice.

Some of the country's most tasty food can be found in
people's homes. The Ivoirians are generous, hospitable people who
enjoy inviting others to join them for a meal. Ivoirians believe that
those who are blessed enough to be able to prepare a meal should share
their good fortune with others.

In a typical village, villagers eat together in a common area. They
believe eating not only gives the body nourishment, but also unites people
with community spirit. Women and girls eat as one group, men as another,
and young boys as a third group. Most villagers eat on a large mat placed
on the ground. With their right hand (the left is considered dirty),
villagers will scoop up their food from large bowls placed in the center
of the mat for everyone to share. Most often rice is rolled into a tight
ball and is used to scoop up meat and sauce.

The eldest villagers eat first. They do this in order to detect any
contaminated or sour food. If bad food is suspected, the elder members
will stop the younger members, including children, from eating from the
bowl.

Once everyone has begun eating, there are some rules that are followed. It
is considered rude and selfish to reach across the table for food.
Villagers want to make certain that everyone receives similar amounts of
food. Coughing, sneezing, and talking during the meal is discouraged. If a
person needs to cough or sneeze, it is customary to get up and walk away
from the mat before doing so. After the meal is over, a bowl of water is
passed around to cleanse the hands. Talking amongst the villagers will
typically resume as the diners relax to digest their meal.

About 15 percent of the population of Côte d'Ivoire is
classified as undernourished by the World Bank. This means they do not
receive adequate nutrition in their diet. Of children under the age of
five, about onequarter are both underweight and stunted (short for their
age). 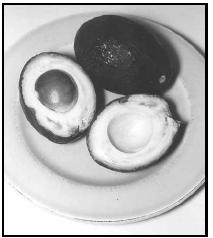 The ripe avocados for Avocado with Groundnut Dressing have pebbly
black skin and creamy, soft flesh. The large pit in the center is
easily removed.

Côte d'Ivoire: Cultures of the World.