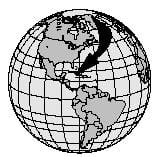 
The Republic of Cuba consists of one large island and several small ones
situated on the northern rim of the Caribbean Sea, about 160 kilometers
(100 miles) south of Florida. With an area of 110,860 square kilometers
(42,803 square miles), Cuba is the largest country in the Caribbean. The
area occupied by Cuba is slightly smaller than the state of Pennsylvania.

Cuba's coastline is marked by bays, reefs, keys, and islets. Along
the southern coast are long stretches of lowlands and swamps. Slightly
more than half the island consists of flat or rolling terrain, and the
remainder is hilly or mountainous. Eastern Cuba is dominated by the Sierra
Maestra mountains, whose highest peak is Pico Real del Turquino. Central
Cuba contains the Trinidad (Escambray) Mountains, and the Sierra de los
Órganos is located in the west. The largest river is the Cauto.

Except in the mountains, the climate of Cuba is semitropical or temperate.

Christopher Columbus discovered the island of Cuba on October 28, 1492,
claiming it in honor of Spain. As colonies were established, the Spanish
began mistreating and exploiting the native inhabitants of the island
until they were nearly extinct. The colonists resorted to importing black
slaves from Africa to operate mines and plantations. As a result, both
Spanish and African cultures formed the foundation of Cuban cuisine.

Spanish colonists brought with them citrus fruits, such as oranges and
lemons, as well as rice and vegetables. They also grew sugar cane, a major
Cuban crop. African slaves were unable to bring any items along with them
on their journey to Cuba. They were, however, able to introduce their
African culture. The slaves developed a taste for
fruits and vegetables such as maize (corn), okra, and cassava. In time,
Spanish and African cultures joined together to create several popular
dishes, including

(rice and beans, often known as Moors and Christians) and

(pieces of lightly fried fruit, similar to the banana).

Cuban cuisine, however, drastically changed after the Cuban Revolution in
1959. Fidel Castro overthrew the government. Cubans who opposed him began
to flee the island, including chefs and restaurant owners. As a result,
food shortages became frequent, and food that was still available was of
poor quality. As of 2001, Castro was still in power and because of
political disagreements with other countries, trade restrictions imposed
on Cuba remain, so living conditions and shortages of food have improved
little. 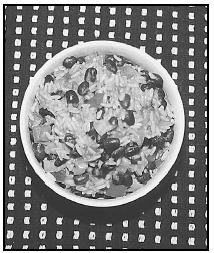 A favorite dish all year 'round is Moors and Christians made
from black beans and rice. The name refers to the African (black
beans) and Spanish Christian (white rice) roots of Cuban culture and
cooking.


Note: Ripe plantains have peels that are almost completely black.
However, the firm, ripe ones called for in this recipe are black and
yellow.

3 FOODS OF THE CUBANS

Although Spain and Africa contributed most to Cuban cuisine, the French,
Arabic, Chinese, and Portuguese cultures were also influential.
Traditional Cuban dishes generally lack seasonings and sauces. Black
beans, stews, and meats are the most popular foods. Root vegetables are
most often flavored with

Middle and upper class Cubans, including tourists, usually consume a wider
variety of foods, if available. The most common meals include those made
with pork, chicken, rice, beans, tomatoes, and lettuce. Hot spices are
rarely used in Cuban cooking. Fried (

) chicken and grilled pork chops are 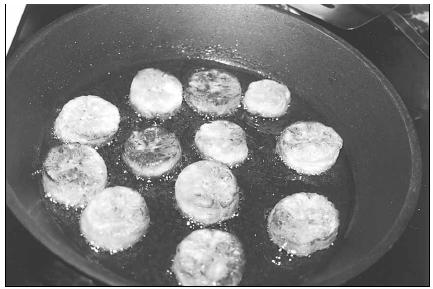 Fried plantains, like white rice and black beans, are part of almost
every dinner menu. In Cuba, the plantains would be fried in oil
about one inch deep.

typically eaten. Beef and seafood are rarely prepared, with the exception
of lobster (which is so popular that it is becoming endangered in Cuba).
Rabbit (

), when available, is also eaten.

Other common dishes in Cuba are

(boiled green bananas mashed into a paste) which is often eaten alongside
meat,

(a snack of spiced beef, onion, and tomato). Ham and cheese is a common
stuffing for fish and steaks, or is eaten alone. The best place to find
the freshest fruits and vegetables on the island is at a farmers market.
Popular desserts include

Constant food shortages make finding or ordering certain foods nearly
impossible. Economic hardship is another reason for poor food conditions.
Cuba often trades its fresh produce, such as cassava, for money from other
countries. This leaves a shortage of cassava and other produce in Cuba
itself. 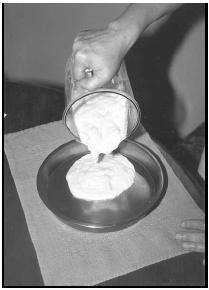 Pour the mango mixture from the blender into a pan. After the
mixture becomes partially frozen, whipped egg whites will be added,
giving the sherbet a lighter texture.

Cuba is officially an atheist country (denies the existence of God or a
higher being). However, it is estimated that about half of all Cubans are
believers of a particular faith.

There are three general faiths that religious Cubans tend to follow:
Afro-Cuban religions (saint worship), Judaism, and Christianity. For
Christians, celebrating Christmas during the second half of the 1900s was
often difficult. For years the government, ruled by Fidel Castro, did not
encourage the celebration of a Christian holiday. However, the holiday of
Christmas has been making a comeback since the end of the 1990s. Those who
celebrate Christmas prepare a large meal on Christmas Eve.

Some Cuban public holidays are January 1 (triumph of the Revolution in
1959); April 4 (Children's Day); May 1 (Labor Day); and December 25
(Christmas Day). During these days, grocery stores are usually closed and
people often head for the island's warm beaches to celebrate, often
packing food for the trip. On New Year's Eve, a small feast is
prepared. At the stroke of midnight, twelve grapes are often eaten (in
memory of each month) and cider is served.

A typical Cuban breakfast, normally served between 7 and 10

(espresso coffee with warm milk). The

is often broken into pieces and dipped into the coffee. Lunch often
consists of

(Cuban sandwiches containing chicken or another meat, topped with pickles
and mustard).

, a thin slice of steak on Cuban bread with lettuce, tomatoes, and fried
potato sticks, is also popular. Finger foods are popular snacks eaten
throughout the day.

, small, flaky turnovers (in various shapes) filled with meat, cheese, or
fruit (such as guava), are also common snacks. Because Cubans are meat
eaters, meat, chicken, or fish will normally be the main dish at dinner.
It is almost always served with white rice, black beans, and fried
plantains. A small salad of sliced tomatoes and lettuce may also be
served.

Fast food establishments exist in Cuba, though popular U.S. chains, such
as McDonald's or Burger King, have not yet set up restaurants on
the island. However, a chain similar to KFC, called El Rápido, opened
in 1995.

, a chain similar to McDonald's, has restaurants throughout major
Cuban cities and is open twenty-four hours.

, normally serve a better meal, but are under strict government
guidelines.

are not allowed to sell shrimp or lobster, and are only allowed to serve
up to twelve people at one table. However, most

serve these dishes anyway. Government-owned restaurants often try to
disguise themselves as being privately owned to attract more customers. In
Cuban restaurants it is common to have several menu items unavailable due
to shortages of food. Some of the highest quality of food on the island is
often found at expensive hotels that mostly serve tourists.

About 19 percent of the population of Cuba is classified as undernourished
by the World Bank. This means they do not receive adequate nutrition in
their diet. About 9 percent of babies born in 1993 were considered to have
low birth weight, a possible sign of inadequate prenatal (pregnancy) care.
After the 1959 Cuban revolution and a decreased level of support from
outside countries, some areas of social and health services began to fall
behind.

Despite almost one-fifth of the population being undernourished, and a
continuously unsettled economy, Cubans are in relatively good health. In
1993, nearly 100 percent of the population had access to free health care,
and safe water was available to
nearly all (95 percent) in 1995. Almost all doctors work for rural
medical services after graduation, allowing rural Cubans to have nearly
equal health care services as those who live in Cuba's larger
cities. Having access to doctors and various health care services may help
to reduce the cases of malnourishment in children.