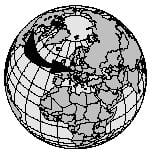 
The Czech Republic is located in the middle of Eastern Europe. It borders
Poland to the northeast, Germany to the north and northwest, Austria to
the south, and Slovakia to the southeast. The country was formally known
as Czechoslovakia, and decided to end its union with Slovakia on January
1, 1993.

The land of the Czech Republic is made up of two regions. Rolling hills,
plains, and plateaus make up the western region of Bohemia. The eastern
region of Moravia is very hilly. Czech summers are relatively cool, with
temperatures averaging 66 °F. Winters are cold, cloudy, and humid,
with temperatures typically around 30°F.

Czech cuisine was influenced historically by the surrounding regions that
dominated the country. In 1273, Count Rudolph, King of Germany, founded
the Hapsburg dynasty. Eventually the dynasty controlled most of Europe,
including the region of the present-day Czech Republic. The Germans
brought with them roast goose, sauerkraut, and dumplings, which have since
become Czech staple dishes.

In 1526, Ferdinand I of Austria began his reign as King of Bohemia (a
western region in the Czech Republic) and the Hapsburg rule of Central
Europe grew. From Vienna, the capital city of Austria,

(breaded and fried chicken or pork patties) were introduced to the
Czechs.

Other culinary influences come from Hungary and Eastern Europe, whose
people used present-day Czech Republic as a crossroad to other European
countries. Hungary introduced

(goulash) to the Czechs, a meat-based dish served with dumplings, and 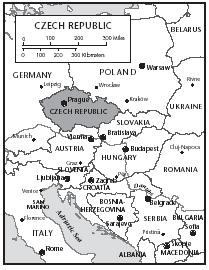 3 FOODS OF THE CZECHS

Czech cuisine is considered heavy and very filling, with meals centered on
meats and starches. This is because Czech winters are long and cold, which
does not allow for a variety of fresh vegetables. In fact, if salads are
available, they typically are limited to two vegetables, such as tomato
and cucumber.

(mushrooms) are the exception, which flourish in local forests and are
popular in soups, such as

Seafood is not widely available because the country is not located by any
large bodies of water. The fish, usually carp and trout, are raised in
artificial lakes or fish farms. Some Westerners may think eating carp is
unappealing, but in the Czech Republic, the water where they are raised is
drained clean every year.

Czechs eat a wide variety of meats, from pork, beef,

(fish), and chicken, to duck, hare (similar to a rabbit), and venison
(deer meat). The meats are commonly served with

(rice), and are covered in a thick sauce. Dumplings are popular side
dishes, and are even stuffed with fruit as a dessert. The sauces are
thick, like gravy, and are commonly made with wine. Sometimes fruit (such
as cherries or berries of some sort), mushrooms, or onions are added for
more flavor. Other common flavorings in Czech dishes are caraway seeds,
bacon, and salt. 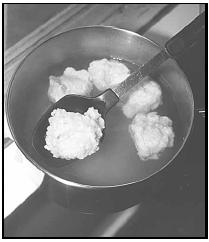 Knedlíky, or dumplings, are made from dough that is boiled in
water.

One of the most popular dishes is called

which is roast pork served with

, made by boiling (or steaming) a mixture of flour, eggs, milk, and either
dried bread crumbs or potatoes. Another popular dish is

, chicken made with a spicy paprika sauce. Sliced dumplings are used to
mop up

(goulash) for a filling lunch or dinner. A Czech specialty is

, roast beef and bread dumplings in

sour cream sauce, with lemon and lingonberries (similar to cranberries). 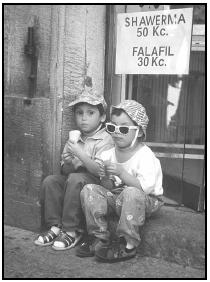 More than 80 percent of the Czech Republic population is Christian, either
Catholic or Protestant. Two of the biggest religious holidays are
Christmas and Easter. Christmas Eve is celebrated on December 24 with a
large dinner. According to one of the many Czech Christmas customs and
traditions, a bowl of garlic is placed under the dinner table to provide
protection to a family. There is an old superstition that if anyone leaves
the dinner table early, they will die the following year. As a result,
everything is prepared and placed on the table before anyone sits down so
no one needs to get up before the meal is finished.

The traditional Christmas Eve meal is usually served around 6

(a type of pastry), and carp. Czechs go fishing for carp before Christmas
Eve and usually keep the fish alive in the bathtub until it is ready to be
prepared.


Moravia is an eastern region in the Czech Republic.

The food that is prepared for Easter dinner is usually taken to Mass on
Easter Sunday, where it is placed on the altar and blessed by the priests.
The blessed food is then taken home to be eaten. A traditional Easter
dinner may include baked ham or lamb,

(Easter soup), made of different herbs and egg, and a loaf of sweet bread
called

made with raisins and almonds.

(breakfast) in a Czech home is hearty–bread with butter, cheese,
eggs, ham or sausage, jam or yogurt, and coffee or tea. For a quick
breakfast, a Bohemian

(pastry) topped with poppy seeds, cottage cheese, or plum jam may be
bought at a bakery.

(lunch) is the main meal of the day for Czechs, where dinner may be no
more than a cold plate of meats or cheese, such as

Popular dishes may include

, roast beef in a creamy sauce topped with lemon and lingonberries
(similar to cranberries), 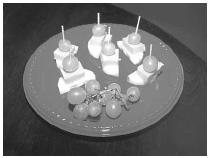 Mala Sousta Se Syre (Small Cheese Bites), slices of cucumber, cubes
of cheese, topped with fruit, may be served as a snack or a light
supper.

Travelers may stop at a street stand and buy a

are also popular, which are commonly made with cold meat, eggs, cheese,
or mayonnaise-based salads, such as ham and pea, or potato. Sandwiches may
be eaten with soups, such as

(soup with liver dumplings), or

Czech beer has been produced since the 1000s, and is considered some of
the best in the world. Adults usually drink it at every meal, sometimes
even at breakfast.

If there is room at the end of a meal, desserts such as

, rolled crepes filled with jam, fruit, or topped with chocolate sauce, or

(apple strudel) may be served.

Czechs prepare their foods in the kitchen and bring out the plates to the
table. The head of the household or the guests are served first. The
Czechs use their eating utensils to eat their meals. The

(fork) are kept in their hands throughout the meal and left crossed on
the table to show that they are not finished eating. In many families,
conversation while eating is minimal, unless there are guests. It is
considered polite for a guest to bring inexpensive gifts to the children
of a host.

The Czechs have very few nutritional problems. Free assistance and care
provided to women and children have resulted in a low
infant mortality rate (number of infant deaths) of 7 per 1,000 live
births in 1999. All school children are provided with medical attention,
including X rays, and annual examinations. In 1997, children up to one
year old were immunized for a number of diseases, including tetanus, and
measles.

The Czech Book: Recipes and Traditions