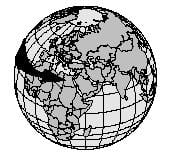 
The Arab Republic of Egypt is located in the northeastern region of the
African continent, bordering both the Mediterranean and Red Seas. The
climate is arid and dry and most of the country receives less than one
inch of rainfall each year. The Mediterranean may offer Egypt's
northern coastline up to eight inches of rainfall each year, and keeps
year-round temperatures cooler than the inland deserts. The widespread
lack of rainfall makes it extremely difficult to grow crops. Egypt has no
forests and only 2 percent of the land is arable (land that can be
farmed).

The well-known Nile River, the longest river in the world, runs north and
south through eastern Egypt and empties into the Mediterranean Sea. The
Nile River Valley, which includes the capital city of Cairo, is the most
fertile land in Egypt. Approximately 95 percent of the country's
population lives alongside the Nile River. However, overcrowding in this
region is threatening Egypt's wildlife and endangering the
Nile's water supply.

Thousands of years ago, ancient Egyptians left evidence of their love for
food. Well-preserved wall paintings and carvings have been discovered on
tombs and temples, depicting large feasts and a variety of foods. Many of
these ancient foods are still eaten in Egyptian households today. Peas,
beans, cucumbers, dates, figs, and grapes were popular fruits and
vegetables in ancient times. Wheat and barley, ancient staple crops, were
used to make bread and beer. Fish and poultry were also popular. Dried 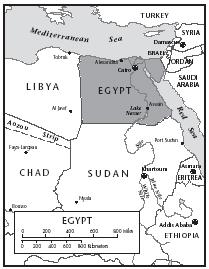 fish was prepared by cleaning the fish, coating the pieces with salt, and
placing them the sun to dry.

(salted, dried fish) remained a popular meal in Egypt as of 2000.

The unique Egyptian cuisine has been influenced throughout history,
particularly by its neighbors from the Middle East. Persians (modern-day
Iraqis), Greeks, Romans (modern-day Italians), Arabs, and Ottomans (from
modern-day Turkey) first influenced Egyptian cuisine thousands of years
ago. More recently, the foods of other Arabic people in the Middle East
such as the Lebanese, Palestinians, Syrians, as well as some foods from
Europe, have affected the Egyptian diet. However, Egyptian cuisine
maintains its uniqueness. After thousands of years, rice and bread remain
staple foods, and

(a spinach-like vegetable) and

(cooked, creamy fava beans), a national dish, are nearly as popular as
long ago.

Koushari, a vegetarian dish, combines lentils, chick peas, macaroni,
and rice in a tomato sauce subtly flavored with onions and garlic.
It is always accompanied by pita bread.

3 FOODS OF THE EGYPTIANS

Egypt has a variety of national dishes.

(grilled lamb pieces) are the most popular.

, the Arabic name for bread, means "life." It accompanies
most meals and is served in various forms. The most common bread is pita,
usually made with whole wheat (or sometimes white) flour. Long, skinny
French-style loaves of bread are also widely eaten throughout the country.
Traditional Egyptian cheeses, as well as feta imported from neighboring
Greece, are frequently served alongside bread at meals.

Despite the country's dry climate and shortage of arable land (land
that can be farmed), Egypt grows a variety of fresh fruits.

(creamy bean paste made from fava beans), one of the country's
several national dishes, is a typical breakfast meal. It is often served
in a spicy sauce, topped with an egg. Lunch, normally served between 2

if more than one is served), topped with typical Middle Eastern fare such
as olives, cheese, and nuts, may also be eaten. Meat (usually lamb,
chicken, fish, rabbit, or pigeon), vegetables, and bread make up a typical
dinner in Egypt. Tea and a dessert, such as

For a typical dessert, Egyptians may serve mint tea with sugar and a
sweet, flaky pastry called baklava. 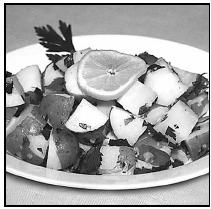 The dressing for Lemon and Garlic Potato Salad is a light and
flavorful combination of lemon juice, garlic, and parsley. 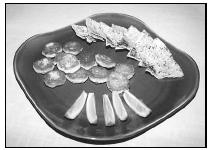 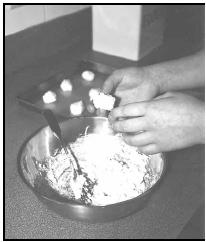 With very clean hands, shape the Gebna Makleyah cheese mixture into
balls about one inch in diameter.

Approximately 90 percent of Egyptians are Muslims, which means they
practice the religion of Islam. The most important time of the year for
Muslims is a monthlong holiday called Ramadan. During the month of Ramadan
(the ninth month on the Islamic calendar, usually November or December),
Muslims fast (do not eat or drink) from sunrise to sunset, and think about
people around the world who do not have enough food. Muslim families will
often come together to prepare hearty meals, including a variety of
sweets, after sunset. Muslims end Ramadan with a three-day celebration
called

a three-day long "great feast," is another important
holiday for Muslims. In recognition of the Bible story of Abraham's
sacrifice of his son, Jacob, families will sacrifice (kill) a sheep or a
lamb. The animal is slaughtered and cooked whole on a spit over an open
fire, and some of the meat is usually given to poorer families. These
animals are also sacrificed on other important occasions, such as births,
deaths, or marriages. 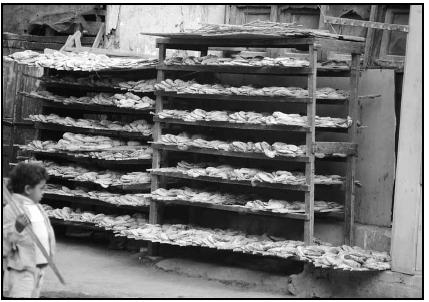 A bakery displays loaves of bread on racks.

Throughout the year, several

may take place. A moulid is a day (or as long as a week) celebrating the
birthday of a local saint or holy person. Several events take place during
this time. Food stands decorating the town's streets are usually
set up near the holy person's tomb. Cairo, the capital of Egypt,
celebrates at least three moulids every year. The largest moulid, Moulid
el Nabit, commemorates the birthday of Muhammad and takes place in Cairo
in early August.

Just under 10 percent of Egypt's population are Christians, whose
most important holiday is Easter, falling in either March or April. It is
common for families to come together to share a hearty meal, much as
Christians worldwide do. Egyptian Christians observe the Orthodox
calendar, which places Christmas on January 7 each year.

Dining customs vary throughout the country and between different
religions. When guests are in the presence of Muslims (who make up
approximately 90 percent of Egypt's population), there are some
general guidelines one should follow. The left hand is considered unclean
and should not be used for eating, feet should always been tucked under
the table, and alcohol and pork should not be requested.

When invited to be a guest in an Egyptian household, it is polite for
guests to bring a small gift to the host, such as flowers or chocolate, to
show their appreciation for the meal. Before dinner, cocktails (often
nonalcoholic) are frequently served. This is a time for socializing and
becoming acquainted.

(salads and dips) would also be served at this time. When dinner is
ready, usually between 9

, guests seat themselves and food is placed in the middle of the table.
Bread will almost always accompany meals, which may include vegetables,
rice dishes, soups, and meat dishes. Following dinner, guests will move
into another room and enjoy coffee or mint tea. Guests should always
compliment the cook.

Most Egyptian peasants cannot afford a large meal. Their diet includes
vegetables, lentils, and beans. Meat, which is more costly, is eaten on
special occasions. Most middle-class families eat a similar diet, but add
more expensive ingredients when they can afford to. All social classes,
however, enjoy quick bites at Egyptian cafes or street vendors.
Traditional teahouses will serve tea in tall glasses (rather than teacups)
and cafes normally offer strong, sweet Turkish coffee. Street vendors sell
a variety of inexpensive foods, including

(a macaroni, rice, and lentil dish) as a lunchtime favorite. Vendors also
sell a variety of

(fresh-squeezed juices) made from fruits like banana, guava, mango,
pomegranate, strawberry, from sugar cane, and even hibiscus flowers. 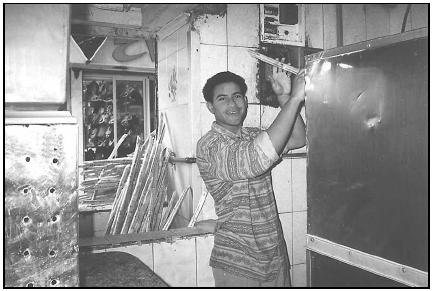 In Cairo, Egypt, a young vendor pushes sugarcane stalks through a
commercial juice extractor. Behind him is a supply of sugarcane,
cultivated on the farms of Upper (southern) Egypt.

In 1999, agriculture made up approximately 16 percent of Egypt's
economy, employing about one-third of all Egyptians. However, Egypt’s
agriculture is also contributing to the slowing of economic growth. A
shortage of arable land (land that can be farmed) has become a serious
problem. The lack of farmable land has caused Egyptian farmers to move to
other countries.

Irrigation necessary to grow its major crops, such as sugar cane, barley,
wheat, corn, cotton, and rice, is also a growing problem. The Nile River
is Egypt's main water source for both drinking and irrigation, and
overuse could risk the country's delicate water supply. More than
two thousand years ago, the Greek historian Herodotus wrote: "Egypt
is the gift of the Nile." Without the Nile River, Egypt would be
virtually dry and crops to prevent hunger and malnutrition could not grow.
Much in part to the irrigation from the Nile River, Egypt has one of the
lowest childhood malnourishment rates on the continent. About 9 percent of
children younger than five were considered malnourished.

Food and Feasts in Ancient Egypt.

Recipes for Food and Cuisine in Egypt. [Online] Available