Ethiopian cuisine (Amharic: የኢትዮጵያ ምግብ) characteristically consists of vegetable and often very spicy meat dishes. This is usually in the form of wat, a thick stew, served atop injera, a large sourdough flatbread, which is about 50 centimeters (20 inches) in diameter and made out of fermented teff flour. 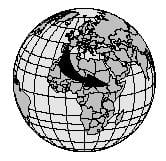 Situated in eastern Africa, Ethiopia (formerly called Abyssinia) has an area of approximately 1,127,127 square kilometers (435,186 square miles). Comparatively, the area occupied by Ethiopia is slightly less than twice the size of the state of Texas.

Ethiopia is a country of geographic contrasts, varying from as much as 125 meters (410 feet) below sea level in the Denakil depression to more than 4,600 meters (15,000 feet) above sea level in the mountainous regions.

It contains a variety of distinct topographical zones: the Great Rift Valley runs the entire length of the country northeast-southwest; the Ethiopian Highlands are marked by mountain ranges; the Somali Plateau (Ogaden) covers the entire southeastern section of the country; and the Denakil Desert reaches to the Red Sea and the coastal foothills of Eritrea. Ethiopia’s largest lake, Lake T’ana, is the source of the Blue Nile River.

The central plateau has a moderate climate with minimal seasonal temperature variation. The mean minimum during the coldest season is 6°c (43°f), while the mean maximum rarely exceeds 26°c (79°f). Temperature variations in the lowlands are much greater, and the heat in the desert and Red Sea coastal areas is extreme, with occasional highs of 60°c (140°f).

Ethiopia was under Italian military control for a period (1935–46) when Benito Mussolini (1883–1945) was in power. Except for that time, Ethiopian culture has been influenced very little by other countries. Ethiopia’s mountainous terrain prevented its neighbors from exercising much influence over the country and its customs. Exotic spices were introduced to Ethiopian cooking by traders traveling the trade routes between Europe and the Far East. 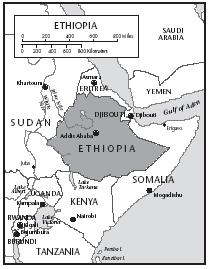 Ethiopia went through a period of recurring drought and civil war during 1974–91. In 1991 a new government took over, and civil tensions were relieved somewhat because the coastal territory seceded from the inland government, creating the new nation of Eritrea.

Ethiopian cooking is very spicy. In addition to flavoring the food, the spices also help to preserve meat in a country where refrigeration is rare.

Berbere (pronounced bare-BARE-ee) is the name of the special spicy paste that Ethiopians use to preserve and flavor foods. According to Ethiopian culture, the woman with the best berbere has the best chance to win a good husband.

3. FOODS OF THE ETHIOPIANS

The national dish of Ethiopia is wot, a spicy stew.

Wot may be made from beef, lamb, chicken, goat, or even lentils or chickpeas,
but it always contains spicy berbere. Alecha is a less-spicy stew seasoned with green ginger. For most Ethiopians, who are either Orthodox Christian or Muslim, eating pork is forbidden. Ethiopian food is eaten with the hands, using pieces of a type of flat bread called injera.

Diners tear off a piece of injera, and then use it to scoop up or pinch off mouthfuls of food from a large shared platter. A soft white cheese called lab is popular. Although Ethiopians rarely use sugar in their cooking, honey is occasionally used as a sweetener. An Ethiopian treat is injera wrapped around a slab of fresh honeycomb with young honeybee grubs still inside.

Injera is usually made from teff, a kind of grain grown in Ethiopia. The bread dough is fermented for several days in a process similar to that used to make sourdough bread. Usually enough bread is made at one time for three days. Little fried snacks called dabo kolo are also popular. 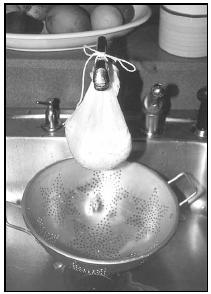 The lab mixture, held in a cheesecloth sack and hung from the
faucet, should drain for several hours.

About half of the Ethiopian population is Orthodox Christian. During Lent, the forty days preceding the Christian holiday of Easter, Orthodox Christians are prohibited from eating any animal products (no meat, cheese, milk, or butter). Instead they eat dishes made from beans, lentils, and chick peas called mitin shiro that is a mixture of beans and berbere . This is made with lentils, peas, field peas, chick peas, and peanuts.

The beans are boiled, roasted, ground, and combined with berbere . This mixture is made into a vegetarian wot by adding vegetable oil and then is shaped like a fish or an egg; it is eaten cold. A vegetable alecha may also be eaten during Lent.

During festive times such as marriage feasts, kwalima , a kind of beef sausage, is eaten. This sausage is made with beef, onions, pepper, ginger, cumin, basil, cardamom, cinnamon, cloves, and tumeric. It is smoked and dried.

Some food words from Ethiopia:

berbere  . A paste, composed of hot spices, used to season many foods.

teff . A grain used to make teff flour, the basis for the national bread,
injera tib . Generic name for cooked meat dishes wot . Spicy stews. If a dish has “wot” in its name, it will be
hot, while “alecha” means mild.

Before eating a meal Ethiopians wash their hands under water poured from a pitcher into a basin. Then a prayer or grace is said. An appetizer of abowl of curds and whey may be served. At the start of the meal, injera is layered directly on a round, woven basket table called a mesob . Different kinds of stews such as wot (spicy) and alecha (mild) are arranged on top of the injera.

An Ethiopian boy displays the produce, including peppers, squash,
and grains, his family is offering for sale in the central market.

Sometimes the meal will not begin until the head of the household or guest of honor tears off a piece of bread for each person at the table. The right hand is used to pick up a piece of injera, wrap some meat and vegetables inside, and eat. As a sign of respect, an Ethiopian may find the best piece of food on the table and put it in their guest’s mouth. Ethiopians drink tej (a honey wine) and tella (beer) with their meals.

Coffee, however, the most popular beverage in the country, is usually drunk at the end of a meal. Ethiopia is considered the birthplace of coffee. Coffee is a principal export.

The coffee, or buna, ceremony begins by throwing some freshly cut grasses in one corner of the room. Incense is lit in this corner next to a charcoal burner, where charcoal is glowing and ready to roast the coffee. All the guests watch while the raw green coffee beans are roasted. The host shakes the roasting pan to keep the beans from scorching and to release the wonderful aroma of the beans.

The beans are then ground with a mortar and pestle (a bowl and pounding tool). A pot is filled with water, the fresh ground coffee is added, and the pot is placed on the charcoal burner until the water boils.
The coffee is then served, often with a sprig of rue (a bitter-tasting herb with a small yellow flower). The same grounds may be used for two more rounds of coffee.

Approximately half of the population of Ethiopia is classified as undernourished by the World Bank. This means they do not receive adequate nutrition in their diet. Of children under the age of five, about 48 percent are underweight, and nearly 64 percent are stunted (short for their age).

Wars, drought, political unrest, and population pressures of the 1970s and early 1980s have left their mark on the health of Ethiopians. Hundreds of thousands of people died during a famine (widespread food shortage) in 1973, and as many as one million may have died between 1983 and 1985.
Ethiopia’s coffee farmers produce one of the largest coffee crops in Africa; however, food crops are mainly produced by small farmers, known as subsistence farmers, who attempt to grow just enough food to feed their family. These farmers are not as successful.

Ethiopians continues to suffer from malnutrition and a general lack of food. Sanitation (toilets and sewers to carry away human waste) is a problem as well, with only one-fifth of the population having access to adequate sanitation. Between 1994 and 1995, a little over one-quarter had access to safe drinking water.

The Africa Cookbook: Tastes of a Continent.