French cuisine consists of the cooking traditions and practices from France.

In the 14th century Guillaume Tirel, a court chef known as “Taillevent”, wrote Le Viandier, one of the earliest recipe collections of medieval France. During that time, French cuisine was heavily influenced by Italian cuisine. In the 17th century, chefs François Pierre La Varenne and Marie-Antoine Carême spearheaded movements that shifted French cooking away from its foreign influences and developed France’s own indigenous style. Cheese and wine are a major part of the cuisine. They play different roles regionally and nationally, with many variations and appellation d’origine contrôlée (AOC) (regulated appellation) laws.

French cuisine was made important in the 20th century by Auguste Escoffier to become the modern haute cuisine; Escoffier, however, left out much of the local culinary character to be found in the regions of France and was considered difficult to execute by home cooks. Gastro-tourism and the Guide Michelin helped to acquaint people with the rich bourgeois and peasant cuisine of the French countryside starting in the 20th century. Gascon cuisine has also had great influence over the cuisine in the southwest of France. Many dishes that were once regional have proliferated in variations across the country.

Knowledge of French cooking has contributed significantly to Western cuisines. Its criteria are used widely in Western cookery school boards and culinary education. In November 2010, French gastronomy was added by the UNESCO to its lists of the world’s “intangible cultural heritage”. 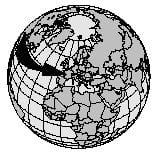 France is the second-largest country in Europe (after Russia). Much of the country is surrounded by mountains. The highest mountain, Mount Blanc, is near France’s border with Italy. The climate and soil of France create good conditions for farming. Although only four percent of the French people earn their living from farming, the country is self-sufficient when it comes to growing its own food.

The French have always been proud of their sophisticated way of cooking. Fertile soil provides fresh fruits, vegetables, herbs, grains, and meat, nearly year-round. The soil is also suitable for growing grapes, which are used for making some of the finest wines in the world. Food and alcohol play important roles in French society—the way a person eats often reflects their French heritage, region of birth, social status, and health.

During the reign of Louis XIV (1661–1715), the nobility (upper class citizens) would hold twelve-hour feasts with over ten different dishes served. The presentation of the food was just as important as the taste and quality of the ingredients. Such elaborate feasts were too expensive and required too much time for the common people to prepare for themselves, but others were also able to enjoy exotic foods and spices, such as the kumquat fruit and yellow saffron, brought back from Africa and Asia by explorers. These foods were quickly incorporated into the French diet.

3. FOODS OF THE FRENCH

The baguette, a long, thin loaf of crusty bread, is the most important part of any French meal. Everyone at the table is expected to eat a piece. It is eaten in a variety of ways, including being used to make sandwiches. Melted cheese spread on a baguette is often presented as part of a meal. A meal of grilled food (called la raclette) is sometimes served. Using an open grill, diners melt their own cheese with ham or beef slices, or fry their own egg. The grilled food is accompanied by potatoes. Sometimes diners spear pieces of bread on long-handled forks, and dip the bread into a pot full of melted cheese called la fondue. 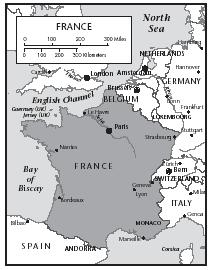 The regions of France have varying cuisine: in Brittany (northwestern France), the main dish is crêpes (thin pancakes) with cider; and in the Alsace region (eastern France near Germany), a popular dish is cabbage with pieces of sausage, called la choucroute. The French from the Loire River Valley eat a special dish made of the Lotte fish that can only be found in the Loire River. On the coasts of France seafood is plentiful, including mussels, clams, oysters, shrimp, and squid. The French enjoy escargots (snails) cooked with garlic and butter, roast duck, and rabbit. 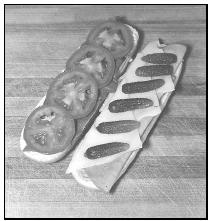 A uniquely French accent to the filling of the Baguette Sandwich are
the cornichons (French pickles). 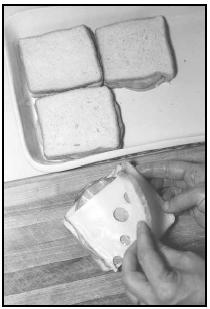 These triple-decker croque-monsieurs (ham and cheese sandwiches)
will be covered with a creamy sauce and topped with shredded Swiss
cheese before baking.

Packaged instant chocolate mousse mix, simpler to prepare than this
traditional recipe, is available at most grocery stores and may be
substituted.

Major French holidays include Christmas (December 25), New Year’s Day (January 1), and Bastille Day (July 14). On Bastille Day, named for the prison that citizens stormed on July 14, 1789, the French celebrate their liberation (freedom) from the monarchy and the beginning of their Republic. There are fireworks, dances, and parties with picnics. Picnics almost always include fromage (cheese), such as Camembert, brie, chevre (goat’s milk cheese), or Roquefort.

For Christmas, the French have large feasts with many courses, which usually end with a

Bûche de Noël, or Yule log. This cake is shaped to look like a log of wood because of the traditional French custom of lighting a real log at Christmas. On the first Sunday of January, the Christian holiday, Epiphany, is celebrated, marking the three kings’ visit to the newborn baby Jesus. For this occasion, a special dessert called la galette des rois, is prepared. A small token, either a bean or porcelain toy, is baked inside.

Whoever finds the hidden bean or porcelain toy in their piece gets to be king or queen for the day and wear a golden crown. Traditionally, the king (the man who found the bean in his piece of cake) had to pick a queen and present her with a gift. To avoid this obligation, the “king” would sometimes eat the evidence. To solve this problem, in 1874 French bakers began putting collectible porcelain charms in their cakes instead of beans.

Serves 8. The person who finds the bean is designated as the queen or king.

When entertaining at home, the hosts pride themselves on making mealtime a memorable and positive experience. For everyday lunches and dinners, four courses are typically served: salad, main dish with meat, cheese with bread, and dessert. Bread and water are always served. Special occasions include even more courses such as an appetizer of savory pastries, or other finger foods. This is normally served with an alcoholic beverage, often French wine. Several bottles of wine may be served with the meal. Coffee is also served.

Restaurants in France are generally more formal than those in the United States. It is expected that patrons are there to have a full meal. Wine is ordered by the half or full carafe (a glass container). Waiters are rarely tipped because a fee for service is added to the bill for the meal. Eating out is a social occasion, and is a leisurely activity. It is  considered rude to ask to have leftover food wrapped to be taken home. Several fast food restaurants such as Quick (a French version of McDonald’s), and Pizza Hut are available. Sidewalk vendors and cafés or local boulangeries (bakeries) also offer quick.

The typical eating habits of the French include three meals a day, with tea served at 4 p.m. Breakfast often includes a fresh baguette and buttery croissants, sometimes filled with chocolate or almond paste. Coffee, café, is usually very strong; café au lait is coffee served with hot milk. Fresh fruit and yogurt are also common at breakfast. Lunch is the main meal of the day and takes more time to eat than the typical lunch in the United States. For this reason, many businesses are closed between 12 noon and 2 p.m. A school lunch might consist of a baguette filled with cheese, butter, meat, lettuce, and tomato. Dinner usually takes place after eight at night.

The diet of the French people is generally considered healthy, and most citizens receive adequate nutrition. In 2001 the countries of Europe experienced outbreaks of two diseases, “mad cow disease” and “hoof and mouth disease” that affected the cattle and sheep herds. Many countries enacted laws and regulations restricting the import and export of meat during that period, until the diseases could be brought under control. In France, there have been protests at some fast food restaurants in an attempt to drive them out of the country to keep the traditional quality of French food and the French lifestyle.

A Taste of France.

An Encyclopedia of World History

Rated G. (1987) This film is set in France in the late 1800s. During an uprising, a French chef named Babette is exiled to Denmark where she becomes maid and cook for two sisters. Babette spends years making simple meals for the sisters until one day she wins the French lottery. Babette uses her winnings to prepare an extravagant seven-course French meal for the sisters and ten other community members. The film depicts the lavish feast in detail, including the food preparation and consumption.