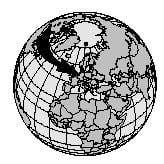 Germany is located in Western Europe. The topography of the country is varied, and includes regions of deep forest and high mountains, as well as a wide valley surrounding the Rhine, Germany’s largest river. The highest mountain peak, the Zugspitze, lies on the border with Austria. Less than 3 percent of Germans are farmers, and the country must import much of its food. Apples, pears, cherries, and peaches, as well as grapes for wine production, are important crops in Germany.

Food has always been a major part of German culture. Even the well-known German fairy tale, Hansel and Gretel, makes reference to food. Hansel and Gretel, brother and sister, discover a house in the forest made of gingerbread and candies. King Frederick II (King Frederick the Great, 1712–1786) introduced the potato, a staple in the German diet. He gave away seed potatoes and taught the people how to grow them. But wars caused food shortages and hardship twice during the twentieth century. After the Germans lost World War I (1914–18), food was scarce and soldiers trying to get home were starving. After World War II (1939–1945), the country had even less food available, but this time nations that had defeated Germany, including the United States, helped to feed the Germans and rebuild the country. In 1949 after World War II, Germany was divided into East Germany and West Germany. This division caused the country’s two halves to develop different styles of cooking. East Germany, closely associated with its neighbor, Russia, took on a more Russian style of cooking. West Germans continued the traditional German cuisine. Germany, similar to the northern and southern styles of cooking in the United States. In the north, restaurants in Hamburg and Berlin might feature aalsuppe (eel soup) or eintopf (seafood stew). Soups of dried beans, such as weisse bohnensuppe (white bean soup) are also popular. In the center of the country, menus include breads and cereals made with buckwheat and rye flour. A favorite dish is birnen, bohnen und speck (pears, green beans, and bacon). In the middle of the country, a region near the Netherlands known as Wesphalia is famous for spargel (asparagus), especially white asparagus, and rich, heavy pumpernickel bread. Westphalian ham, served with pungent mustard, is popular with Germans worldwide.

Frankfurt, located in the south, is the home of a sausage known as Wüstchen . This sausage is similar to the U.S. hot dog, sometimes called a “frankfurter” after the German city. In the south, a dish mysteriously called Himmel und erde (Heaven and Earth) combines potatoes and apples with onions and bacon. The southern region of Bavaria features rugged mountains and the famous Black Forest. Black Forest cherry cake and tortes, as well as Kirschwasser, a clear cherry brandy, are two contributions from this area. Spätzle (tiny dumplings) are the southern version of knödel (potato dumplings) of the north. Lebkuchen is a spicy cookie prepared especially during the Christmas season. East and West Germany were reunited in the early 1990s, but Germans continue to cook according to their region.

3 FOODS OF THE GERMANS

Germans tend to eat heavy and hearty meals that include ample portions of meat and bread. Potatoes are the staple food, and each region has its own favorite ways of preparing them. Some Germans eat potatoes with pears, bacon, and beans. Others prepare a special stew called the Pichelsteiner, made with three kinds of meat and potatoes. Germans from the capital city of Berlin eat potatoes with bacon and spicy sausage. Sauerbraten is a large roast made of pork, beef, or veal that is popular throughout Germany, and is flavored in different ways depending on the region. In the Rhine River area, it is flavored with raisins, but is usually cooked with a variety of savory spices and vinegar. Fruit (instead of vegetables) is often combined with meat dishes to add a sweet and sour taste to the meal. Throughout Germany desserts made with apples are very popular.

Knödel, or dumplings, accompany many meals, especially in the north. In the south, a tiny version called spätzle is more common. Knödel may be made either of mashed potatoes or bread (or a mixture of both), and are either boiled or fried. Germans enjoy bread with every meal, with rye, pumpernickel, and sourdough breads more common than white bread. Soft pretzels can be found almost anywhere. Spargel (asparagus) served with a sauce or in soup is popular in the spring. Sidewalk cafés are popular meeting places for kaffee (snack with coffee) in the afternoon.
Cory Langley

Oktoberfest is the German festival of October. It is held, not in October but during the last week of September in Munich. In late summer or early fall in the United States, many cities stage Oktoberfests to celebrate German culture, especially German beer. At German Oktoberfests, beer is traditionally drunk from a large, decorated stone mug called a Bier Stein (beer stein). Germany has more than 1,200 breweries, making over 5,000 different kinds of beer.

For Christmas, cut-out honey cakes called Lebkuchen are baked in squares, hearts, semicircles, or little bear shapes, iced, and decorated with tiny cutouts of cherubs (angels) and bells. One large or five to seven small cakes are then tied together with a bright ribbon and presented by a young lady to a young man of her choice on Christmas Day. Springerle (cookies), marzipan candies, and Stollen (a type of coffeecake with candied and dried fruit) are also popular Christmas desserts. To accompany the cookies, Germans drink Glühwein, a type of mulled wine. A favorite drink with teenagers is Apfelschörle, a sparkling fruit juice. A traditional Christmas dinner is roast goose with vegetables and Kartoffelknödeln (potato dumplings).

After rolling out the dough, cut the lebkuchen into shapes such as hearts or teddy bears. If the cookies are to be hung by a ribbon, pierce one or two holes in the dough near the top of the cookie.
EPD Photos

When eating out in Germany, it is polite to have both hands above the table at all times, but elbows should not rest on the table. It is also considered impolite to leave food on a plate. Waiters expect a 5 to 10 percent tip. An imbiss is a food stand that may serve bratwurst or other fast foods. Another type of restaurant is the bierhall, which commonly serves bratwursts, accompanied by beer.

Breakfast, or früstück, consists of rolls with jam, cheese, eggs, and meat. Coffee or tea may also be served. The zweites früstück (literally second breakfast) is a mid-morning snack eaten at work or school. Students

Making soft pretzels. Using a clean pastry brush, brush each pretzel with beaten egg and then sprinkle them with coarse salt.
EPD Photos

Making soft pretzels. Twist the ropes into pretzel shapes and place them on a greased cookie sheet.
EPD Photos

Making soft pretzels. The baked pretzels are best served warm, but they may be stored in a plastic bag or other airtight container for a few days.
EPD Photos

may have belegtes brot (literally covered bread), a small sandwich of meat or cheese, and a piece of fruit. Germans eat their big meal of the day, mittagessen, around noon or later, sometimes lasting two hours. The meal almost always begins with suppe (soup), and several more courses follow (see sample menu). In the afternoon, kaffee (snack with coffee) is often served, consisting of pastries and cakes. Abendbrot (supper, literally “bread of the evening”) is a lighter meal than lunch, usually offering an open-faced sandwich of bread with cold cuts and cheese, eaten with a knife and fork, and perhaps some coleslaw or fruit. Pretzels and sweets may be enjoyed, especially by children, any time during the day.

Many Germans have begun to modify their eating habits to lower their calorie and cholesterol intake. Since the unification of East and West Germany in the 1990s, the government has faced the challenge of bringing the living conditions in the former East Germany up to the standard found in the former West Germany. Upgrading housing, schools, and utilities will continue after 2001. Despite unequal living conditions, Germans in all parts of the country are well nourished. In fact, most German children have enough to eat.