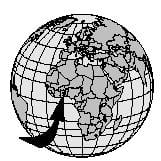 
Situated on the southern coast of the West African bulge, Ghana has an
area of 238,540 square kilometers (92,100 square miles), extending 672
kilometers (418 miles) from north to south and 536 kilometers (333 miles)
from east to west. Comparatively, the area occupied by Ghana is slightly
smaller than the state of Oregon. Ghana's capital city, Accra, is
located on the Gulf of Guinea coast.

The climate is tropical but relatively mild with two rainy seasons (April
through June and from September to November). A serious environmental
problem in Ghana is desertification (land that once supported plant life
changing into barren desert). This is caused by poor land management
practices, such as overgrazing, heavy logging, and slash-and-burn
agriculture (where the land is cleared by cutting down all plants and
trees and then burning away the remaining brush and stumps).

Ghana's earliest inhabitants existed as long ago as 6000 B.C.
Ancient stone tools and other artifacts have been discovered that suggest
early hunter-gatherer communities, most of which lived by the ocean. These
nomadic tribes (traveling from one place to another) roamed the land in
search of berries and wild seeds, and followed herds of animals for meat.

Ancient trade routes existed long before the arrival of the first
Europeans in 1471. Trade routes running north to south, and east to west,
many of which ran through Ghana, existed throughout the continent of
Africa. Modern-day Ghana imported dates, salt (for food preservation),
tobacco, and copper from northern territories, while 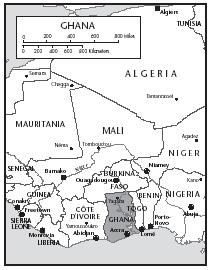 The Portuguese arrived in modern-day Ghana in 1471, the first Europeans to
explore the land. Though they were searching for a sea route to the Far
East, the explorers began building forts along the coast and trading with
inland tribes for their gold. By 1600, the Dutch and English began
exploring Ghana. One hundred years later, the Germans and Danes also built
forts—all hoping for ivory and gold. In return, explorers brought
rum, cotton, cloth, beads, and weapons to the tribesmen. Eventually the
Europeans forcefully captured Ghanaians as slaves.

In addition to ivory and gold, Ghana was exporting palm oil, pepper, and
corn by the mid-1800s. By 1902, the British had driven out all other
European powers and named their new British colony the Gold Coast (it was
later named Ghana in 1957). To continue the economic development of Ghana,
the government distributed cocoa beans to local farmers to encourage the
growth of a cocoa industry. At the beginning of the twenty-first century,
Ghana's economy continued to be largely reliant on the exports of
gold and cocoa. Bananas, cola nuts (the basic ingredient of many cola
drinks), coconuts, rice, palm fruit, and various citrus fruits have also
flourished into profitable cash crops.

3 FOODS OF THE GHANAIANS

Ghanaians enjoy a rather simple, but flavorful cuisine. The majority of
meals consist of thick, well-seasoned stews, usually accompanied by such
staple foods as rice or boiled yams. Stews come in a variety of flavors,
the most popular being okra, fish, bean leaf (or other greens),

sauce (spinach stew with either fish or chicken), and groundnut (peanut),
one of the country's national dishes.

Many spices are used to prepare stews and other popular dishes. Cayenne,
allspice, curry, ginger, garlic, onions, and chili peppers are the most
widely used seasonings. Onions and chili peppers (along with tomatoes,
palm nuts, and broth) help to make up the basis for most stews.

Certain foods that make up the Ghanaian diet vary according to which
region of the country people live in. In the north, millet (a type of
grain), yams, and corn are eaten most frequently, while the south and west
enjoy plantains (similar to bananas), cassava, and cocoyams (a root
vegetable).

The people of the dry southeastern region eat mostly corn and cassava.
Rice is a staple throughout most of the country.

, a spicy dish that includes tomato sauce and meat, is enjoyed by most of
the population.

, a fermented beverage made from sorghum (a type of grain), is a popular
drink in the north, while those living in the south prefer palm wine. 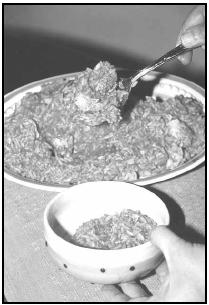 Jollof rice, tomato-flavored rice to which meat or fish is often
added, may be served hot or at room temperature.

A staple throughout West Africa, including Ghana, is

(boiled plantain, cassava, or rice that is pounded with a large mortar
and pestle into a round ball). Other commonly eaten vegetables include
spinach, okra, eggplant, onions, tomatoes, sweet potatoes, beans, corn,
and cocoyams. Some villagers eat

, a fermented corn dish, or corn on the cob with pieces of coconut.

Meat is considered a sign of wealth and luxury in Ghana and is seldom
eaten. Fish, especially near the coast, is found more often in everyday
dishes and stews.

, crabs with cassava dough, meat, and potatoes, and

There are many treats for Ghanaians to enjoy after meals. Surprisingly,
not many of them include chocolate as an ingredient, despite Ghana being
one of the world's leading producers of cocoa.

, a dessert or snack, is made of fried plantains seasoned with ginger and
ground red pepper or fresh chili peppers. Another dish that may be served
for dessert is a pancake made of mashed plantains, deep-fried in palm oil. 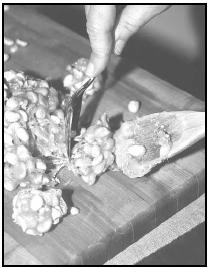 Two spoons are used to separate the sticky Groundnut Toffee mixture
into balls. Groundnuts (peanuts) are used in many recipes, from main
courses to desserts.

The government does not recognize any religion as Ghana's official
national religion. This is because Ghanaians believe in several different
religions. Roughly 60 percent are Christians, 15 percent are Muslims
(believers in the Islamic religion), and the remainder of the population
practices a form of indigenous religion that existed hundreds of years
before the introduction of Christianity or Islam. Such beliefs are called
animism, the belief that all objects possess a spirit that is capable of
causing both harm and good to those who come in contact with it.

The Portuguese introduced Christianity to Ghana in the 1400s, though
Christian missionaries in the 1800s were most responsible for spreading
the faith. In modern-day Ghana, the majority of Christians live near the
coastal regions and enjoy taking part in Christian holidays.

Christmas is a special time of year for all Christians, including the
Ghanaians, who observe Christmas for up to eight days. It is a time when
relatives and friends visit one another and children receive new clothes
and toys. The most popular dish at Christmas dinner is chicken, though
goat or sheep may also be prepared for the special occasion. Yams and stew
or soup are popular accompaniments served with the main dish. Fresh fruits
and sweet treats are often offered for dessert. Muslims celebrate Islamic
holidays (such as Ramadan) with as much anticipated joy, though they
rarely consume pork or alcohol.

More than 100 festivals take place throughout Ghana each year, many of
which are based on animistic beliefs and revolve around times of harvest.
They typically pay tribute to their ancestors. These vibrant festivals
give the Ghanaians a feeling of spiritual and cultural connection. All
festivals, even somber ones, involve dancing, singing, and feasting.

One of the most popular festivals is

, the presentation of the new harvest of yams to their ancestors. The
weeklong festival in either September or October (depending on the
harvest) follows strict guidelines each year. One rule prohibits the
consumption of new yams until the festival has ended. On the fourth day
before the start of the festival, a huge feast is held in honor of the
living and the dead and feasts are held at the center of many towns.

Independence Day is joyously observed each year on March 6 in remembrance
of Ghana's independence from Great Britain in 1957. Fireworks,
sporting events, awards
shows, and cultural displays are all a part of the festivities. As in
most of West Africa, the yam or plantain (similar to the banana) dish
called

is a favorite dish to eat on this special day. A yam dish called

is served with hard-boiled eggs for breakfast on festival mornings.

Ghanaians traditionally consume three meals a day and each meal is usually
only one course. The typical kitchen contains an open fire, a clay oven, a
large pot for cooking large quantities of food (such as stew), and a large
iron griddle for frying. Although each ethnic group has its own style of
cooking,
most Ghanaians typically cook by their own instincts, adding ingredients
as necessary and determining preparation and cooking times simply by
monitoring their meals.

Breakfast is occasionally more substantial than the light, midday snack
that some groups consume.

) is a popular dish eaten in the morning. It consists of a cassava,
cocoyam, yam, and plantain mixture that is boiled with onion and fish, and
then pounded and boiled a second time.

(ken-KAY) may be eaten morning, midday, or in the evening. Ground
cornmeal is soaked in water and left to ferment for up to two full days
before it is shaped into a ball, boiled, and wrapped in plantain leaves.
It is a popular accompaniment to fish or stew.

, a porridge made from ground millet, is another breakfast dish.

Dishes served for lunch and dinner are typically very similar.

(cassava, plantain, or cocoyam dough), palm fruit, fish, beans, eggplant,
and groundnuts are often eaten alone or combined and eaten over rice, or
as ingredients in a stew. Pepper soup is hot and spicy, but loved by most
Ghanaians. To offset the spicy pepper, drinks native to Ghana such as
Refresh, a soft drink made with fresh fruit juice, are extremely popular,
especially among children who enjoy its sweet taste. Fried bean cakes
called

, porridge made from corn or millet mixed with milk and sugar, are all
popular meals for school children.

Sundays are often the day for wealthier Ghanaians to eat out, especially
those living in the coastal regions. Cheaper café-like establishments
called "chop houses" sell local food and are popular among
locals and tourists alike. However, street stalls sell local dishes for
the least amount of money. Most chop houses and street stalls are run by
women. Stalls often sell fresh fruit,

About 11 percent of the population of Ghana is classified as
undernourished by the World Bank. This means they do not receive adequate
nutrition in their diet. Of children under the age of five, about 27
percent are underweight, and more than one-quarter are stunted (short for
their age). Goiter (a swelling of the thyroid gland) was present in
one-third of all school children between 1990 and 1995. This is usually a
sign of an iodine deficiency. However, Ghanaians consume a fairly large
amount of yams, which contain Vitamin B

(thiamin) and Vitamin C. Vitamin B

helps the body use energy foods and Vitamin C helps to keep the body
tissues strong and helps the body to use iron. Yams also provide some
fiber, which helps keep the digestive system working properly.

Northern Ghana suffers harsher, more extreme weather conditions than the
south, causing less food to be available during times of disaster. Floods
during the wet season and droughts during the dry season can lead to
serious health risks, including under-nourishment. Southern Ghana
experiences more stable conditions and is located closer to seaports. Food
in the south can also be more efficiently stored, and most people can
afford to buy food from markets when weather conditions destroy their
crops.

Ghana: Cultures of the World