Greece is the southernmost country in the Balkan Peninsula, the region
that includes Albania, Macedonia, and Bulgaria to the north. It has a
total area of 131,940 square kilometers (50,942 square miles). About a
fifth of the area is composed of more than 1,400 islands in the Ionian and
Aegean seas. About four-fifths of Greece is mountainous, including most of
the islands.

Oranges, olives, dates, almonds, pomegranates, figs, grapes, tobacco,
cotton, and rice abound in the areas of lower elevation, primarily in the
east. Among Greece's main environmental problems are industrial
smog and automobile exhaust fumes in the area around the capital, Athens.
The smog regularly sends Greeks to the hospital with respiratory and heart
complaints.

Greek cooking traditions date back thousands of years. Greeks today eat
some of the same dishes their ancestors did in ancient times. These
include

(stuffed grape leaves) and many of the same fruits, vegetables, and grain
products. A Greek, Archestratus, is thought to have written the first
cookbook in 350


The Greek diet has been influenced by traditions from both the East and
West. In ancient times, the Persians introduced Middle Eastern foods, such
as yogurt, rice, and sweets made from nuts, honey, and sesame seeds. In
197

, when Rome invaded Greece, the Romans brought with them foods that are
typical in Italy today including pasta and sauces. Arab influences have
left their mark in the southern part of Greece. Spices such as cumin,
cinnamon, allspice, and cloves play a prominent role in the diet of these
regions. The Turks later introduced coffee to Greece. Potatoes and tomatoes were brought from New
World after exploration of the Americas began about five hundred years
ago.

3 FOODS OF THE GREEKS

Fresh fruits and vegetables play a large role in the Greek diet. With its
long coastline, Greece also relies heavily on fish and seafood. Meat tends
to play a less important role. It is often used as an ingredient in
vegetable dishes instead of as a main dish. The islands and coastal areas
of Greece favor lighter dishes that feature vegetables or seafood. In
contrast, the inland regions use more meat and cheese in their cooking.

The Greeks eat bread, grains, potatoes, rice, and pasta nearly every day.
Staples of the Greek diet include olives (and olive oil), eggplant,
cucumbers, tomatoes, spinach, lentils, and other types of beans, lemons,
nuts, honey, yogurt, feta cheese, eggs, fish, chicken, and lamb. The
following are some of the most famous Greek dishes:

(a meat and eggplant dish);

). The national beverage of Greece is strong Turkish coffee, which is
served in small cups. Other beverages include

, an alcoholic drink flavored with anise, and a popular wine called 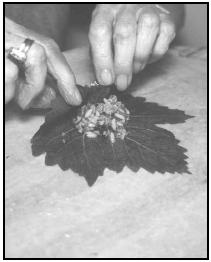 Dolmades, one of the best-known of all Greek dishes, are grape
leaves rolled around a mixture of ground meat and rice, simmered in
a rich tomato broth.

Greece is a mostly Orthodox Christian country, and many Greeks observe the
church's fast days. On these days, they eat either no meat or no
food at all. There are strict dietary rules for Lent and Holy Week (the
week before Easter). During Holy Week and on Wednesdays and Fridays in
Lent, meat, fish, eggs, and dairy products are forbidden.

Mayeritsa (Easter soup with lamb meat and bones and vegetables)

Rice or orzo (a rice-shaped pasta)

Greeks observe feasts as well as fasts. A roasted, stuffed turkey is eaten
for Christmas, and a baby lamb or goat, roasted whole, is served for
Easter dinner. A soup called

made with lamb parts is also eaten on Easter. Many traditional cakes are
served for both Christmas and Easter. These include honey-dipped biscuits
called

. There is also a special New Year's cake called

. Before Easter, hard-boiled eggs are painted bright red and then polished
with olive oil. On Good Friday (the Friday before Easter) a special
holiday bread called

is baked. On Easter Sunday, family members crack their eggs against each
other for good luck. 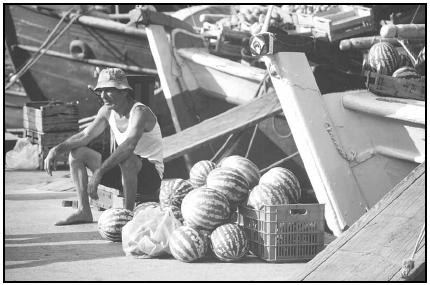 The diet of people living on the islands and in coastal areas of
Greece features abundant quantities of fruits, vegetables, and
seafood. 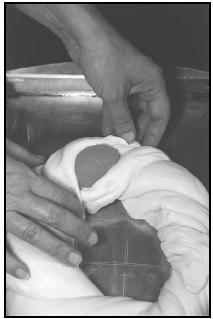 Greeks are not known for eating big breakfasts. Typical breakfast foods
include bread, cheese, fresh fruit and, for adults, coffee. In rural
areas, the main meal of the day is eaten at around 1:00 or 2:00 in the
afternoon. It is followed by a rest period when schools and businesses
close, allowing people to stay home during the hottest part of the day. In
the cities, however, many people do not have time to go home for a large
lunch. Instead they eat a light meal at midday and a larger dinner later
on.

In the late afternoon, many Greeks help themselves to light refreshments
called

. These may consist of bread, fresh vegetables, cheese, olives, dips, or
soup.

are sometimes served as appetizers at the beginning of a big meal. Like
many other Europeans, Greeks eat their evening meal late—sometimes
as late as 10

In the city, dinner is the main meal. In rural areas where a big lunch is
eaten, dinner is lighter. The most common dessert in Greece is fresh
fruit, but the Greeks also love to eat sweets, either as a snack or
dessert.

Greeks are known for their hospitality. A traditional offering for guests
is

, a thick jam made with fruit or a vegetable such as tomato or eggplant.
It is served with ice water and coffee.

Since it is warm and sunny in Greece for so much of the year, eating
outdoors is very popular. Greece has an abundance of native herbs, including thyme, basil, oregano,
rosemary, and sage, and fruits, such as nectarines, oranges, peaches, and
apples. Many Greek villagers farm, and herd sheep or goats for a living.
Fish (providing protein) and other seafood are plentiful, as four seas
surround the peninsula of Greece.

Many Greeks have adequate nutrition; however, there is a growing number of
homeless children living and working on the streets. Laws to protect
children are in place, but applied unevenly.

Food and Recipes of Greece. Kids in the Kitchen: The Library of
Multicultural Cooking

Eating Around the World in Your Neighborhood

Holidays of the World Cookbook for Students.