Guatemala is located in Central America. It has an area of 108,890 square
kilometers (42,043 square miles), slightly smaller than the state of
Tennessee. Because of its consistently temperate climate, Guatemala has
been called the "Land of Eternal Spring." Crops such as
coffee, sugar, bananas, and cocoa are grown both for consumption in
Guatemala and for export. Guatemala, with parts of Mexico and Honduras,
occupies the Yucatán peninsula, where the lowland forest of
Petén, once the home of the Mayas, is found. Guatemala's main
environmental problems are caused by deforestation—more than 50
percent of the nation's forests have been destroyed since 1890. The
nation's water supply is also at risk due to industrial and
agricultural pollutants.

The history of Guatemala is often recognized in three stages: the Mayan
Empire, Spanish rule, and the modern republic (which is in existence
today). All three have had an influence on Guatemalan cuisine. The ancient
Mayan civilization lasted for about six hundred years before collapsing
around 900 A.D. These ancient natives lived throughout Central America and
grew maize (corn) as their staple crop. In addition, the Maya ate

Guatemala remained under Spanish rule from 1524 to 1821. Typical Spanish
dishes, such as

, began making their way into the Guatemalan diet. At the beginning of the
twenty-first century, an

(meat turnover) could be purchased for about twenty-five cents, chicken
tortillas for fifty cents each, and a hot beef sandwich for about
seventy-five cents. Other countries and their cultures have also affected
the Guatemalan diet, including the Chinese. Most Guatemalan cities and
towns have at least one Chinese restaurant. 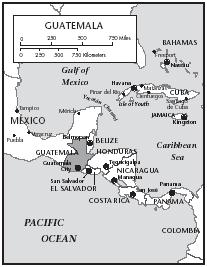 Guatemala became independent from Spain in 1821, and continues to remain
independent. In the late 1800s and early 1900s, banana and coffee
plantations were established. Sugarcane became another successful
agricultural crop by the end of World War II (1939–1945).

3 FOODS OF THE GUATEMALANS

Guatemala does not have a national dish, but there are many foods that
have become a part of the everyday diet. Just as during the time of the
Mayans, corn continues to be a staple food. It is most often eaten in the
form of a tortilla (a thin corn pancake). These are usually served warm
and wrapped in cloth. Black beans (

, another Mayan staple, are eaten at almost every meal. They are usually
refried (

Chicken, turkey, and beef (roasted, grilled, or fried) are the
country's most popular meats and are normally accompanied by beans
and rice (

). Meats are often served in stews (

) or cooked in a spicy chili sauce, though whole chickens may occasionally
be served with the feet still attached.

, a thick meat and vegetable stew, is a common dish in the area of Antigua
(a town just outside of Guatemala City, the country's capital).
Seafood is most common along the coasts, and is usually prepared with
various spices.

Other popular dishes are

(mashed avocado with onions and spices),

(chiles stuffed with meat and vegetables). Fresh fruits and vegetables,
such as yucca, carrots, plantains, celery, cucumbers, and radishes, help
to keep the Guatemalan diet healthy. However, snacks, such as doughnuts (

Guatemalan coffee, which is most often exported, is considered some of the
best in the world. Most Guatemalans, however, tend to drink weak coffee
loaded with plenty of sugar. Rich, savory coffee is more commonly found in
tourist areas.

, is a refreshing alternative.

The majority of Guatemalans (approximately 60 percent) are Roman Catholic.
The traditional Mayan religion, however, still exists and is widely
popular throughout the country. Both religions have holiday and
festival celebrations, although there are several special days throughout
the year that are observed by everyone. The country is also home to
several minority groups.

Christmas and Easter are two of the most widely celebrated holidays in
Guatemala. The days before Christmas are filled with parties and various
festivities, including decorating homes with

Holy Week, also known as Semana Santa, is celebrated the week before
Easter. Guatemalans dress in colorful costumes to celebrate the week of
festivities, which includes floats, music, and all types of food. Fish,
chickpeas,

(spicy vegetables with vinegar), and candied fruits are popular foods
during this time. Those of Mayan descent often feast on

(chicken in a seasoned sauce, served with rice and potatoes),

(a hot drink made of ground corn, barley, cinnamon, and brown sugar), and
cooked fresh fruit, such as peaches or pears. Small doughnuts glazed with
honey and cinnamon, called

The first day of November marks All Saints Day, also known as the
"Day of the Dead." Rather than a day of mourning, it is a
time to celebrate the lives of loved ones that have passed away. To feel
close to the dead, families often have a picnic on top of a loved
one's grave.

with a stick to release the treats inside. Weddings in Guatemala often
feature bell-shaped

that are filled with raw beans, rice, and confetti.

A rural diet normally contains more simple ingredients. The day may begin
with coffee, black beans, and tortillas. A midmorning snack around 10 A
.M. may be

, a sweet corn drink. Following a traditionally large lunch, another
snack, such as coffee and a sweet pastry, is usually enjoyed around 4 P.M.
Eggs and vegetables often accompany black beans and tortillas (often made
by combining ground cornmeal with lime juice) for dinner. Extremely poor
Guatemalans sometimes eat little more than corn, beans, and fruit.

When guests are invited for dinner in a Guatemalan home, it is polite to
bring a small gift to the hosts, such as candy or flowers, but most people
prefer that the guest simply bring dessert.

Those dining at a restaurant will have several options for international
cuisine: Spanish, Mexican, French, Italian, Chinese, Caribbean, and
Mediterranean, to name a few. A 10 percent tip is suggested at most
restaurants.

As an alternative to traditional food, American fast food chains have
established themselves throughout the country. They provide quickly
prepared meals and are relatively inexpensive. As of 2001, several of the
most popular American chain restaurants existed in Guatemala, in addition
to other chains. 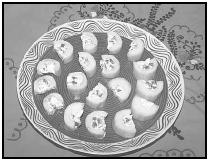 Pepinos Rellenos combine the cool firm flesh of the cucumber with a
soft, creamy, flavorful filling. 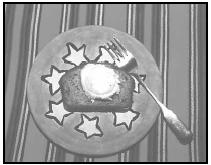 A slice of banana bread is a simple snack; when served topped with
butter or honey, it is an accompaniment for a salad or light meal;
when topped with whipped cream or ice cream, it becomes dessert.

About 17 percent of the population of Guatemala is classified as
undernourished by the World Bank. This means they do not receive adequate
nutrition in their diet. Of children under the age of five, about 27
percent are underweight, and more than 50 percent are stunted (short for
their age).

It is estimated that the poorest half of the population gets only 60
percent of the minimum daily caloric requirement. Malnutrition,
alcoholism, and inadequate housing and sanitation pose serious health
problems.