Hungary is a landlocked country in the middle of Europe. It is a little
smaller than Indiana, and is a land with fertile soil. Hungarian farmers
grow enough wheat, corn, rye, potatoes, and some fruits, to feed its
population. Even though many Hungarian farmers raise livestock, the
quality of the animals they raise (and the meat they produce) is below the
standard of Hungary's neighbors, mostly because there is not enough
quality animal food available.

One of the largest challenges facing Hungary is the preservation of its
environment. Hungary has huge problems with air and water pollution, but
the government does not have enough money or technology to minimize
pollution from factories.

Hungary's principal rivers are the Danube and Tisza, and the
largest lake is Balaton. All three provide good fishing areas for
Hungary's sport and commercial fishers.

The first people to live in present-day Hungary were nomads called the
Magyars, who arrived in around A.D. 800. Hungary's national dish, a
meat stew called goulash, can be traced to the Magyars' eating
habits. They traveled with dried cubes of meat cooked with onions, and
water could be added to make a stew.

The reign of King Matthias (1458–90) was a high point in Hungarian
history, for both culture and food. Through his Italian wife, Queen
Beatrice, King Matthias brought Italian cooking to Hungary. During this
period, cooking was raised to a fine art.

When the Turks invaded Hungary in the sixteenth century, they brought
their cooking
customs with them. These included the use of the spice paprika and a
thin, flaky pastry called

) dough. They also taught the Hungarians how to cook stuffed peppers and
eggplants. The Turks introduced coffee to Hungary.

Austria's Hapsburg monarchy gained control over Hungary from the
seventeenth century to the beginning of the twentieth century. Under
Austrian rule, German and Austrian cooking styles influenced Hungarian
eating habits. During this period, Hungary became famous for its cakes and
pastries.

3 FOODS OF THE HUNGARIANS

The best-known ingredient in Hungarian food is the red-powdered spice
called paprika. It is used to flavor many dishes. Other staples of
Hungarian cooking include onions, cabbage, potatoes, noodles, and caraway
seeds. Both cream and sour cream are used heavily in Hungarian food.
Dumplings (dough wrapped around different kinds of fillings) are very
popular as are cabbages or green peppers stuffed with meat and rice.
Another favorite is the pancake called a

It is often rolled or wrapped around different kinds of fillings.

Hungarians eat a lot of meat, mostly pork or beef. Many meat dishes are
dipped in bread and then baked or fried. Hungarians also prepare many
different kinds of sausages. The Hungarian national dish is meat stew.
People outside Hungary call it "goulash," but the Hungarians
have several different names for it, including

. The dish they call goulash, or

is actually a soup made with meat

and paprika. Paprika is also a key ingredient in another national dish; a
fish soup called


The Hungarians are known throughout the world for their elegant pastries
and cakes. The flaky pastry dough called

was brought to Hungary by the Turks in the seventeenth century. Instead
of the honey and nuts used in Turkish pastry, the Hungarians filled

dough with their own ingredients to make a dessert known as strudel.
Strudel fillings include apples, cherries, and poppy seeds. Hungary is
known for its wines, especially the sweet wines of the Tokay region. 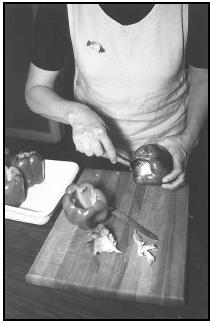 Every Hungarian cook has a recipe for green peppers filled with a
stuffing of ground meat and rice.

is served. It is made from chopped fruit, candied orange peel, walnuts,
sugar, rum, and brandy, to which even more ingredients are added. 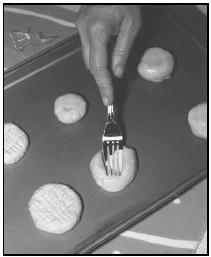 Bakers decorate the tops of Hungarian Butter Cookies by pressing a
fork into the top of each ball of dough to make a cross-hatch
pattern.

Ham and lamb are popular Easter dishes. Easter ham, boiled together with
the Easter eggs, is served smoked, spiced, or pickled. Lamb may be served
as chops or cutlets or be cooked in a stew with paprika. Pastries
sprinkled with poppy seeds or walnuts and called horseshoe cakes are
served for dessert. Breaded chicken is traditionally eaten on the Monday
after the Easter. Chicken is often eaten on Sundays.

Most people who live in the country eat a big breakfast. It may consist of
eggs, ham or sausage, cheese, green peppers and tomatoes, and rolls and
butter. Adults drink tea or coffee; children drink milk or cocoa. In the
city, some people eat a lighter breakfast consisting of a beverage and
rolls with honey or jam.

Lunch, eaten between noon and 2:30

, is the main meal of the day. Soup, vegetables, and dessert usually
accompany a main meat dish. A light supper is eaten in the evening,
between 5:30 and 8:00 P.M. Usually this is a one-course meal, consisting
of soup, a vegetable dish, or a "Hungarian cold plate." This
is a plate of cold meats, cheeses, vegetables, and hard-boiled eggs. It
can be eaten for supper, as a snack, or even for breakfast. Hungarians eat
salad as a side dish with the main part of the meal, not before or after.
Most Hungarian meals end with something sweet, such as sweet noodles,
pancakes, dumplings, or a dessert like strudel or cake. In addition to
cold meat,
popular snacks include dumplings, noodle dishes, and baked goods such as

Before each meal, Hungarians wish their friends or relatives a good
appetite, saying

(YO ATE-vah-dyat KEE-vah-nok). At the end of a meal, they express thanks
to their host or hostess, saying

When making Noodle Pudding, cooked noodles are added to a creamy
mixture of sour cream, egg yolks, sugar, raisins, and nuts. The
pudding is then transferred to a casserole and baked.

Almost all Hungarians receive adequate nutrition. There is little scarcity
of food, and, except for occasional years when there is not enough
rainfall, Hungarian farms produce enough food to feed the people.

The Multicultural Cookbook for Students

The Food and Cooking of Eastern Europe

Eating Around the World in Your Neighborhood