Indian cuisine consists of a wide variety of regional and traditional cuisines native to the Indian subcontinent. Given the range of diversity in soil type, climate, culture, ethnic groups, and occupations, these cuisines vary substantially from each other and use locally available spices, herbs, vegetables, and fruits. Indian food is also heavily influenced by religion, in particular Hindu, cultural choices and traditions. The cuisine is also influenced by centuries of Islamic rule, particularly the Mughal rule. Samosas and pilafs can be regarded as examples.

Historical events such as foreign invasions, trade relations, and colonialism have played a role in introducing certain foods to this country. For instance, potato, a staple of the diet in some regions of India, was brought to India by the Portuguese, who also introduced chillies and breadfruit. Indian cuisine has shaped the history of international relations; the spice trade between India and Europe was the primary catalyst for Europe’s Age of Discovery. Spices were bought from India and traded around Europe and Asia. Indian cuisine has influenced other cuisines across the world, especially those from Europe, the Middle East, North Africa, sub-Saharan Africa, Southeast Asia, the British Isles, Fiji, and the Caribbean

The Republic of India, Asia’s second-largest country after China, occupies the largest part of the South Asian subcontinent, which it shares with Pakistan, Nepal, Bhutan, and Bangladesh. India’s total area is 3.3 million square kilometers (1.3 million square miles). Among India’s most serious environmental problems are land damage, water
shortages, and air and water pollution (about 70 percent of India’s water is polluted). Even in rural areas, the burning of wood, charcoal, and dung for fuel, coupled with dust from wind erosion during the dry season, creates an air pollution problem. Rice, the largest crop, is grown wherever the conditions are suitable.

Some of India’s foods date back five thousand years. The Indus Valley peoples (who settled in what is now northern Pakistan) hunted turtles and alligator, as well as wild grains, herbs and plants. Many foods from the Indus period (c. 3000–1500 B.C.) remain common today. Some include wheat, barley, rice, tamarind, eggplant and cucumber. The Indus Valley peoples cooked with oils, ginger, salt, green peppers, and turmeric root, which would be dried and ground into an orange powder.


The Aryan-speaking peoples who entered India between 1500 and 1000 B.C used leafy vegetables, lentils, and milk products such as yogurt and ghee (clarified butter). The Aryans also used spices such as cumin and coriander. Black pepper was widely used by 400 A.D. The Greeks brought saffron, while the Chinese introduced tea. The Portuguese and British made red chili, potato and cauliflower popular after 1700 A.D.

Perhaps the biggest contributors to India’s culinary heritage are the Muslim peoples from Persia and present-day Turkey, who began arriving in India after 1200. These peoples, known later as the Mughals, ruled much of India between 1500 and early 1800. They saw food as an art, and many Mughal dishes are cooked with as many as twenty-five spices, as well as rose water, cashews, raisins and almonds.

Chapati, or Indian bread, is prepared throughout India. The woman in the picture on the left is working in a typical urban kitchen in the city of Ghaziabad. The woman on the right prepares chapati in a typical village kitchen in northern India.

3. FOODS OF THE INDIANS

What Indians eat varies by region and religion. Northern Indians eat more flat breads, while those from southern India prefer rice. In coastal states, such as Kerala and Bengal, fish dishes are popular. Chicken and mutton (sheep) are eaten more often in mountain and plains regions. While many Hindus avoid eating beef, Muslims avoid pork. In addition, many Indians—particularly Hindus, Buddhists, and Jains—are vegetarian.

Spices are used in many Indian dishes. When it is hot, spices such as chili peppers and garlic help the body sweat and cool it down. In colder weather, spices such as cloves, cinnamon, ginger, black pepper, cardamom, and nutmeg help warm the body.

Indian cuisine is varied, but many dishes are cooked in a similar way. The preparation starts with frying onion, ginger, garlic or spices such as cumin seeds in oil at a high temperature. Meats, vegetables, flavorings such as yogurt, and spices such as turmeric then are added. The dish then simmers at a low heat until the ingredients are cooked. At the end of the preparation, leafy herbs such as cilantro and flavorings such as lemon juice are added.

This style of preparation may be linked to the traditional use of cow dung. For centuries, families would cook by placing a pan on top of patties made from cow dung. Like the charcoal used in modern-day barbecues, dung initially produces a high heat, but then burns slowly. Although middle-class and urban Indians have electric or gas stoves, many rural households still use cow dung (waste). 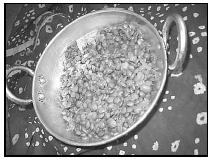 Dal, or spicy lentils, are shown here in a traditional serving dish.
Dal is usually made with red lentils, but any lentils may be used. 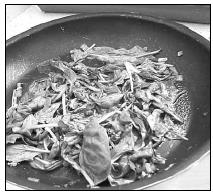 Nearly every holiday in India requires a feast. The year’s biggest festival is Diwali, which occurs in October or November. The actual date is set by the lunar calendar and varies from year to year. The festival’s meaning varies by region and religious group. But some traditions are shared: old debts are paid off, homes are cleaned, new clothes are made or purchased, and an elab orate meal is prepared.

On Diwali and other festive occasions, India’s Mughal heritage takes center stage. The Mughals saw eating as an art and a pleasure. Courtly chefs prepared food that tasted good, and delighted the senses of smell, sight and touch. Many Mughal dishes call for meat, but vegetarians incorporate the spices and nuts that Mugal cooking made popular. In addition, many purchase sweets such as ladhu and barfi at local shops, and distribute them among their relatives and friends. Many of these sweets also date to Mughal times, and use ingredients such as besan (chickpea flour), paneer (a white cheese), rose water, almonds, and sugars.

Many celebrate the start of spring with Holi. In the morning, people splash each other with colored water and smear one another with red, yellow, green, blue and orange powders. Many also drink bhang , a yogurt drink. After the festival, the old clothes are burned and halwa (a sweet dish made with wheat or rice flour, butter and sugar) is eaten.
The day often ends with a feast and musical festivities. Halwa “cakes” are often served for breakfast on special occasions, such as birthdays. 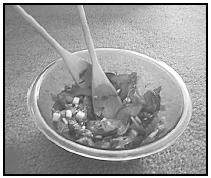 Tamatar Salat combines the cooling flavor of mint with the sharper flavors of tomatoes, onions, and lemon.

Indians eat several small meals a day. Many families begin the day at dawn with prayers. A light meal of chai (Indian tea) and a salty snack will follow. Breakfast usually takes place a couple of hours later, and may include a traditional Indian dish such as aloo paratha (a flatbread stuffed with potato and fried), or toast with eggs. Other popular breakfast dishes include halwa (made with ground wheat, butter, sugar and sliced almonds) or uppma, which is a spicier version of halwa.


Students often eat a mid-morning snack, such as a banana with juice or tea, at school. Lunch usually includes one or two cooked vegetable dishes, rice and chapati (a flat-bread that resembles a Mexican tortilla). Many students carry their lunches from home in containers known as tiffins.

An afternoon snack often is served around 5 or 6 P.M. It includes tea and namkeen (snacks or appetizers), and sometimes may involve a visit to a restaurant or street stall that sells spicy snacks such as samosa (a small turnover stuffed with potatoes and peas) or bhel puri (a combination of puffed rice, yogurt, tamarind sauce, and boiled potatoes).

In addition, fruits such as mango, pomegranate, grapes, and melon may be served. Dinner traditionally is served quite late, and includes two or three vegetable dishes along with rice and chapati . In many households, both adults and children take a cup of hot milk, flavored with sugar and a touch of cardamom before going to sleep. 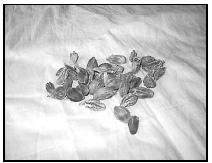 A mother in a suburban kitchen near New Delhi prepares warm milk for her daughter. It is common for both adults and children to drink warm milk, flavored with sugar and cardamom, at bedtime.

About 22 percent of the population of India is classified as undernourished by the World Bank. This means they do not receive adequate nutrition in their diet. Of children under the age of five, about 53 percent are underweight, and more than 52 percent are stunted (short for their age). The government put into place a national system to distribute Vitamin A to children, which contributes to malnutrition and blindness.

India is one of the few countries where men, on the average, live longer than women. To explain this, it has been suggested that daughters are more likely to be malnourished and be provided with fewer health care choices.
In a society where sons are favored over daughters, female infanticide is a mounting problem. In addition, hundreds of thousands of children are living and working on the streets. Child prostitution is widespread. Special measures are being taken by the government to rehabilitate juvenile prostitutes and convicts to help remedy the growing problem.

India’s government has established an extensive social welfare system. Programs for children include supplementary nutrition for expectant mothers and for children under the age of seven, immunization and health programs, and prevocational training for adolescents. The government is also paying increasing attention to health, maternity, and childcare in rural India by sending out growing numbers of community health workers and doctors to areas in need.

The Healthy Cuisine of India

Most ingredients for Indian foods are available at grocery stores. Health food stores and ethnic stores that specialize in Indian, Pakistani or Middle Eastern cuisine often have special ingredients such as garam masala and premixed tandoori masala pastes.