Irish cuisine is the style of cooking that originated from Ireland, or was developed by the Irish people. It has evolved from centuries of social and political change, and the mixing of the different cultures in Ireland, predominantly the English and Irish (and, in Ulster, the Scottish). The cuisine is founded upon the crops and animals farmed in its temperate climate. 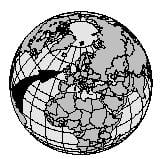 Ireland, or officially the Republic of Ireland, is an island nation in the North Atlantic Ocean. (The northernmost part of the island is Northern Ireland, which is part of the United Kingdom.) Almost 20 percent of the land is devoted to farming. Less than 10 percent of farmland is used to grow crops and the majority is used as grazing land for livestock.

The arrival of the Anglo-Normans in Ireland in 1169 affected both farming and diet in Ireland. (Anglo-Normans are the Normans who remained in England after the Norman Conquest. Led by William the Conqueror, the Normans came from the Normandy region of France in 1066.) Wheat, peas, and beans became staple foods and people began preparing more elaborate dishes. Food customs were also changing, as French and Italian cooking customs influenced the upper-class cuisine.

The potato was introduced to Ireland by the late 1500s. Within 200 years it had replaced older staples, including oats and dairy products. The potato became the mainstay of the Irish diet. In the 1840s, the country’s heavy reliance on potatoes led to the disaster known as the Irish Potato Famine. Most Irish farmers grew one particular variety of
potato, which turned out to be highly sensitive to disease. A potato blight that had started in Belgium swept the country. It destroyed one-third of Ireland’s potato crop in 1845 and triggered widespread famine. In the next two years, two-thirds of the crop was destroyed.

More than one million people died as a result of the potato blight, and two million emigrated (moved away) to other countries. Even though they had suffered through the Irish Potato Famine (also called the Great Famine), Irish people continued to love potatoes. As soon as the spread of the disease stopped, the potato returned its place as the staple food in the Irish diet. Farmers began to spray their crops with chemicals to protect them from disease. As of 2001 the Irish were consuming more potatoes than most
countries in the world. 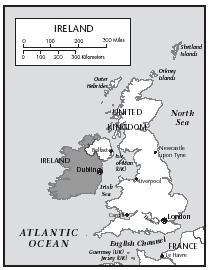 3. FOODS OF THE IRISH

Irish food is known for the quality and freshness of its ingredients. Most cooking is done without herbs or spices, except for salt and pepper. Foods are usually served without sauce or gravy.

The staples of the Irish diet have traditionally been potatoes, grains (especially oats), and dairy products. Potatoes still appear at most Irish meals, with potato scones, similar to biscuits or muffins, a specialty in the north.

The Irish have also been accomplished cheesemakers for centuries. Ireland makes about fifty types of homemade “farmhouse” cheeses, which are considered delicacies.

Soups of all types, seafood, and meats also play important roles in the Irish diet. Irish soups are thick, hearty, and filling, with potatoes, seafood, and various meats being common ingredients. Since their country is surrounded by water, the Irish enjoy many types of seafood, including salmon, scallops, lobster, mussels, and oysters.

However, meat is eaten more frequently at Irish meals. The most common meats are beef, lamb, and pork. A typical Irish dinner consists of potatoes (cooked whole), cabbage, and meat.

Irish stew has been recognized as the national dish for at least two centuries. A poem from the early 1800s praised Irish stew for satisfying the hunger of anyone who ate it:

Then hurrah for an Irish Stew
That will stick to your belly like glue.


Bread is an important part of Irish culture. Fresh soda bread, a crusty  brown bread made from whole-wheat flour and buttermilk, is a national dish of Ireland. Irish bakers don’t stop with soda bread, however. They bake a wide variety of other hearty breads and cakes.

The most common everyday beverage in Ireland is tea. Popular alcoholic beverages include whiskey, beer, and ale. Coffee mixed with whiskey and whipped cream is known throughout the world as “Irish coffee.”

Irish Soda Bread, loaded with raisins and caraway seeds, is cut into wedges and served with sweet butter.

This is one of the most widely eaten potato dishes in Ireland.

The most festive holiday meal of the year is Christmas dinner, followed by Easter Sunday dinner. During the 40 days of Lent, Irish Catholics choose certain foods they wish to not eat. At one time, all animal products, including milk, butter, and eggs, were not to be consumed during Lent.

The poorer Catholics of Ireland were often left to eat only oatcakes for the 40-day period. On Good Friday, the Friday before Easter Sunday, the Irish eat hot cross buns, a light, bread-like pastry topped with a frosting cross that holds spiritual meaning.

Another day on the Catholic calendar that the Irish Catholics do not eat meat is All Saints’ Day (November 1). Each county has its own special meatless dishes for this occasion. Popular dishes include oatcakes, pancakes, potato pudding, apple cake, and blackberry pies.

For Christmas, people throughout Ireland eat spiced beef, and a fancy Christmas cake full of dried and candied fruits for dessert. 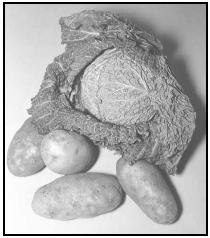 Potatoes and kale (or cabbage) are staples of the Irish diet, and
form the main ingredients in Colcannon, a traditional Halloween
dish.

This potato and cabbage dish is traditionally served on Halloween with a ring or lucky charm hidden in the center.

Barm Brack is the traditional cake bread eaten at Halloween.

The cake tastes best when baked 1–3 weeks ahead of time. This traditional cake is served at holiday festivities throughout December. It is traditionally decorated with marzipan (almond paste), white icing, and holly sprigs.

The Irish value hospitality, and generous portions of food are common at home and in restaurants.

Dinner, the main meal of the day, used to be eaten at lunchtime. A typical dish was “Dublin coddle,” a bacon, sausage, potato, and onion soup. Today, however, many Irish people eat lighter meals in the morning and at midday. They have their main meal later in the day, when they come home from work or school. Lunch is often a bowl of hot soup that is served with freshly baked soda bread.
However, many pubs (bars) still serve the traditional large midday dinner. “Supper” in Ireland means a late-night snack. A typical supper is a slice of bread with butter and a glass of milk.

The Irish are known for their rich, dark beer, called stout. The mostfamous and widely known brand is called Guinness. Tea is another popular beverage. It is served with scones, probably the most popular snack in Ireland. “Fish and chips,” or battered and fried fish served with French fries, is also very popular.

Modern Ireland has few problems related to availability of food. In the early part of 2001, Irish cattle and sheep farmers, like other farmers in Europe, were fighting against an outbreak of hoof and mouth disease, a deadly viral disease that is fatal to hoofed animals. By summer, the outbreak had been brought under control.

The Complete Book of Irish Country Cooking: Traditional and Wholesome
Recipes from Ireland.

In An Irish Country Kitchen.

Irish: The Taste of Ireland in Traditional Home Cooking.