Islands of the Pacific

Islands of the Pacific 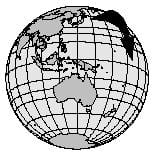 
There are thousands of islands in the South Pacific Ocean. Some island
groups are independent nations, others are territories or dependencies of
the United States, France, and the United Kingdom. The island groups are
categorized as Polynesia, Melanesia, and Micronesia. Polynesia includes
the U.S. state, Hawaii, along with New Zealand, Easter Island, Tonga,
Tahiti, and other islands. Melanesia includes Papua New Guinea, Vanuatu,
New Caledonia, the Solomon Islands, and their surrounding islands.
Micronesians inhabit about 2,500 islands that make up the countries
Kiribati, Federated States of Micronesia, Palau, Republic of the Marshall
Islands, and Northern Mariana Islands. The islands of Fiji are volcanic,
with rugged peaks. The environmental conditions on the islands of the
Pacific Ocean support seafood and lush tropical vegetation.

The first inhabitants on the islands of the Pacific came from Southeast
Asia more than 20,000 years ago. They were hunters and gatherers who
depended on the plentiful supply of seafood from the ocean that surrounded
them. They became known for the great fishing skills they developed.

New islanders who arrived around 3000

are believed to have introduced agriculture to the Pacific region.
Bringing with them seeds and livestock from the Asian mainland, they
planted and harvested crops and bred animals. They introduced foods
including bananas, coconuts, sweet potatoes, yams, and breadfruit. The
animals they 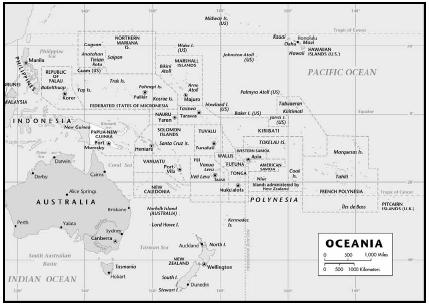 brought with them included dogs, chickens, and pigs.

Explorers from Europe in the 1500s brought more new foods to the islands.
These included carrots, potatoes, turnips, beef cattle, and sheep. It took
a long time until the Western world showed serious interest in the Pacific
Islands. By 1900, however, the United States, France, Germany, and Britain
all claimed control of islands in the Pacific. Over time, they made a
lasting impact on the food customs of the islands they controlled. Cooking
styles on the island of Tahiti, for example, continue to reflect a strong
French influence.

3 FOODS OF THE PACIFIC ISLANDERS

Seafood, particularly fish, has long been the primary dietary staple and
source of protein for Pacific Islanders. Nearly 300 varieties of fish are
found in the waters of Polynesia alone. Fish is typically eaten raw,
poached, or grilled. Root vegetables and tubers, such as taro (also known
as a cocoyam), sweet potatoes, and yams, are also central to the diet of
the region. A wide variety of tropical fruits are also eaten in large
quantities. These include bananas, plantains (similar bananas), mangoes,
papayas, and pineapples.

One dish that is uniquely Hawaiian is poi, made from the taro root.
Traditionally, the root was roasted in an underground pit filled with hot
coals for several hours, and then pounded with a stone to make a sticky
paste. By adding water, the pudding-like poi was created. Hawaiians ate
poi by the bowlful, using only fingers to scoop it up.

The coconut, a common fruit grown in tropical regions, is a main dietary
staple. Nearly all of the Pacific islanders use coconut milk as their main
cooking ingredient. The starchy fruit of the breadfruit tree is another
Pacific island staple. When it is cooked, it has a texture like bread
(which is how the tree got its name). It can be peeled and eaten whole or
mashed into a paste that is dipped into warm coconut milk. The most
commonly used spice in the Pacific islands is soy sauce. Gallon containers
of it can be found in many households. 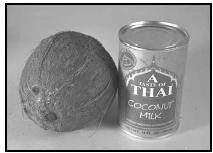 Canned coconut milk, widely available in supermarkets, may be
substituted for freshly made coconut milk. Fresh coconut milk should
be used immediately, since it loses its flavor even if refrigerated. 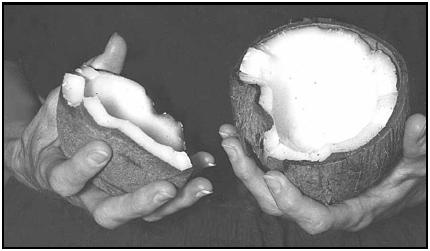 After baking, the hard shell of the coconut often cracks open. If
the oven's heat didn't crack the shell, it can be
broken open easily by striking with a hammer or rolling pin.


The name of this dish is pronounced "PWAH-sun croo."

Pacific Islanders are known for their love of enormous feasts. They hold
feasts to celebrate saints' days, births, marriages, and local
events such as the crowning of a new chief. There are also funeral feasts.
A typical feast might include cooked fish and shellfish and barbecued
chicken or pork (or both). Also served are a wide variety of dishes made
from taro (also known as cocoyam), sweet potatoes, yams, bananas,
plantains, and coconuts.

Many Pacific Islanders are Christians and celebrate the major Christian
holidays, including Christmas and Easter. Some Catholics fast (do not eat
or drink) during the day or give up certain foods for Lent. Roast pig is a
popular dish for Christmas dinner. Buddhism and Hinduism are also found in
the region. Fiji, which has a large Indian population, observes Hindu
festivals. Sweets are eaten on Diwali, the Hindu new year.

Mealtime customs vary among the many different nationalities and ethnic
groups of the Pacific Islands. For example, dinner is the main meal of the
day for Tahitians of Chinese and Polynesian descent. However, those of
European descent eat their most significant meal at lunchtime.

Pacific Island feasts are gala occasions that can be enjoyed by family,
friends, or an entire village. Music is usually played while the food is
eaten. Instead of a table, bowls and baskets of food may be laid out on
mats or on a carpet of banana leaves.

in Fiji, and an

on other islands). It consists of a large pit dug in the ground and
filled with stones heated over a fire made from dried branches and 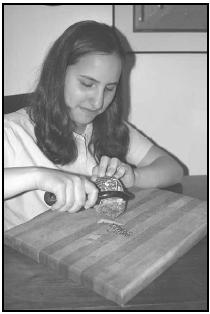 The taro root is grown all over the Pacific region, but Hawaiians
are the only ones who pound it into the pudding-like dish called
poi. Other islanders grate it or roast it to add to stews and
similar dishes.

twigs. The food is wrapped in banana leaves and placed on top of the
heated stones. Then it is covered with more layers of banana leaves and
other materials to keep the heat in while it cooks. Once the food has
finished cooking, it is taken out of the pit and removed from its wrapping
of leaves. Pacific Islanders typically eat with their fingers. Sunday
dinners and meals for other special occasions are often cooked in these
underground ovens. 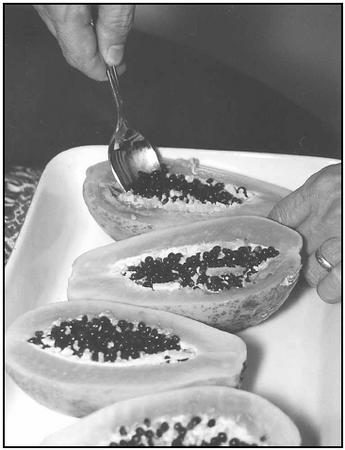 Arrange the peeled papaya halves, cut side up, in a baking dish.
Scoop out the seeds before baking the papaya dessert.

The islands of the Pacific Ocean enjoy beautiful scenery and tropical
climates. However, the people living in these island nations are
vulnerable to catastrophic weather, such as intense cyclones, droughts,
and even more serious, global warming. While there is still much debate
about global warming among scientists, serious consequences could result.
The islands’ economies are adversely affected when shoreline and coastal
buildings are damaged or destroyed by cyclones. Crops fail and fishing
catches decline during periods of drought. Cyclones and droughts also
contribute to the deterioration of coral reefs and to the spread of
diseases like malaria and dengue fever.

The Kids' Multicultural Cookbook: Food and Fun Around the World.

The Oxford Companion to Food

Tahiti: Cultures of the World

. Holidays of the World Cookbook for Students