Located in southern Europe, Italy is slightly larger than the state of
Arizona. Most of Italy is mountainous, and it is home to Mount Vesuvius,
the only active volcano on the European mainland.

A fertile valley surrounds the Po River, the largest river in Italy. Many
different plants thrive in its rich soil. Italy is surrounded by water on
three sides and benefits from a variety of seafood and coastal vegetation.

Climate varies depending on elevation and region. Colder temperatures can
be found in the mountainous regions, particularly within the high peaks of
the Alps, a mountain range in the northwest. Temperatures are warmer in
the Po River valley, the coastal lowlands, and on Italy's islands
(Sicily and Sardinia), with an average annual temperature around
60°F.

Plants and animals also vary depending on elevation and region. Italy
hosts a wide variety of trees, including conifers, beech, oak, and
chestnut in the higher elevations. Evergreens, cork, juniper, laurel, and
dwarf palms are widespread throughout the Po River Valley and
Italy's islands.

From the early Middle Ages (beginning around A.D. 500) to the late 1800s,
Italy consisted of separate republics, each with different culinary
(cooking) customs. These varying cooking practices, which were passed down
from generation to generation, contributed to the diversity of Italian
cuisine. Italy's neighboring countries, including France, Austria,
and Yugoslavia, also 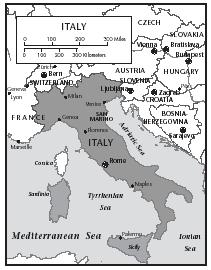 contributed to differences in the country's cuisine.

Italy changed in many ways when the economy flourished following World War
II (1939–45). During this time, farming was modernized and new
technologies and farming systems were introduced. Various culinary
practices throughout the country's regions began to be combined
after people started migrating from the countryside to the cities. Many
southern Italians traveled to the north at this time, introducing pizza to
northern Italians. Those from the north introduced risotto (a rice dish)
and polenta (a simple, cornmeal dish) to the south. Fast foods, mostly
introduced from the United States, have brought more culinary diversity to
Italy. However, pride in the culture of one's region, or

extends to the food of the locality, and regional cooking styles are
celebrated throughout the country.

3 FOODS OF THE ITALIANS

Although Italians are known throughout the world for pizza, pasta, and
tomato sauce, the national diet of Italy has traditionally differed
greatly by region. Prior to the blending of cooking practices among
different regions, it was possible to distinguish Italian cooking simply
by the type of cooking fat used: butter was used in the north, pork fat in
the center of the country, and olive oil in the south. Staple dishes in
the north were rice and polenta, and pasta was most popular throughout the
south. During the last decades of the twentieth century (1980s and 1990s),
however, pasta and pizza (another traditional southern food) became
popular in the north of Italy. Pasta is more likely to be served with a
white cheese sauce in the north and a tomato-based sauce in the south.

Italians are known for their use of herbs in cooking, especially oregano,
basil, thyme, parsley, rosemary, and sage. Cheese also plays an important
role in Italian cuisine. There are more than 400 types of cheese made in
Italy, with Parmesan, mozzarella, and asiago among the best known
worldwide.

ham, the most popular ingredient of the Italian

(first course) was first made in Parma, a city that also gave its name to
Parmesan cheese. 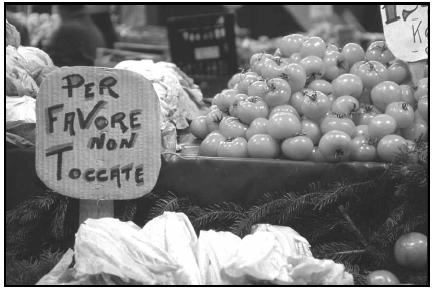 To protect his produce from too much handling, this vendor displays
a sign reading "Please don't touch" in Italian.
Per favore is "please."


Commercial instant polenta is available in packages in the supermarket,
usually displayed near the packaged rice. It would be an adequate
substitute for the traditional method of preparation.

Every Italian village celebrates its own saint’s day with a festival
featuring fireworks, feasting, and dancing. The traditional main dish for
these festivals is roast suckling pig. A popular Easter dish throughout
Italy is

Although the holiday bread called

is the best known of Italy's many holiday desserts, regions
throughout the country have their own traditional holiday sweets featuring
local ingredients. In the north, butter is a major ingredient of these
desserts.

cakes, similar to fruitcake, are filled with raisins, dates, figs,
almonds, pine nuts, orange peel, rum, and cinnamon, are baked two or three
weeks before Christmas because they improve with time. Strudel is popular
in the Tyrol region in northern Italy. In the south, dessert recipes are
more elaborate and use olive oil (instead of butter), lots of eggs,
candied fruit, and honey. Among the best known are

, fried cubes of egg pastry covered with honey and sprinkled with colored
sugar, a specialty from Naples.

Biscotti should be crunchy. Serve with coffee. Makes about 24 biscotti. 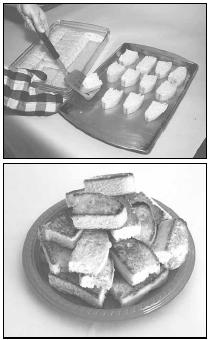 (Top) The baked biscotti are placed on a cookie sheet, ready to be
toasted under the broiler. (Bottom) When done, biscotti should have
a light, crunchy texture.

), often stopping at a coffee shop on their way to work for a

(coffee with milk) or

with bread, butter, and jam, or cake. Lunch and dinner are similar meals.
They consist of an antipasto (an appetizer based on cold meats), a pasta
or rice dish (depending on the region) such as risotto, a main meat or
fish course, a salad, and cheese and fruit. Lunch (


Whether eating at home or in a restaurant, Italians take food seriously.
They prefer to dine in a leisurely fashion, savoring their meals over a
bottle of wine and conversation. Wine and bread are always served during
main meals. Even children are often allowed a taste of wine. In southern
Italy, where people take a long break during the hottest part of the day,
dinner (


In addition to their main meals, Italians have two traditional snack
times.

(midmorning snacks) and the mid-afternoon

. Both usually serve a type of bread dough with toppings. Some typical

(usually a long loaf of bread, cut into slices and topped with
seasonings),

(an Italian flatbread), and

Italian cities. However, increased interest in traditional dishes and
consuming healthy, lighter meals has helped these snacks become popular
again, even in the United States.

Serve warm or at room temperature. Serves 4 to 6. 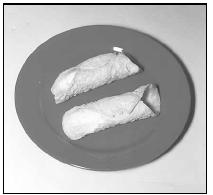 Unfilled cannoli shells are available in most supermarkets.

The government in Italy controls much of the agriculture of the country.
It controls how much wheat can be produced, for example, and how much
wheat can be imported. The government was not successful during the 1990s
in its efforts to increase agricultural production. Italy imports about
one-half of its meat, and in the late 1990s and through 2001, concerns
over European beef because of mad cow disease and hoof and mouth disease
caused the prices of beef to increase.

All Around the World Cookbook.

The Good Food of Italy, Region by Region.