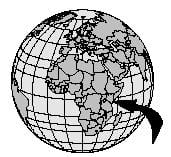 
Kenya is located in East Africa near the Equator (the imaginary line that
divides the Earth into the Northern and Southern Hemispheres). The country
is approximately twice the size of Nevada. The southeast part of Kenya
borders the Indian Ocean. The land regions are varied and range from
year-round snow in the Kenya and Kilimanjaro Mountains to warm, tropical
beaches. Some of the regions are desert, but most land is rolling
grasslands and forests.

Kenya's climate is as varied as the land areas. Typically, there
are two rainy seasons. The highest amount of rainfall occurs in April and
the least rainfall occurs in January. The evenings in the Central
Highlands can be quite chilly and the coastal areas are usually hot and
humid.

When the Portuguese arrived in 1496 on the coast of Kenya, they introduced
foods from newly discovered Brazil. Maize, bananas, pineapple, chilies,
peppers, sweet potatoes, and cassava were brought in and became local
staples. The Portuguese also brought oranges, lemons, and limes from China
and India, as well as pigs.

Pastoralism (cattle herding) has a long history in Kenya. Around

1000, a clan from North Africa called the Hima introduced cattle herding.
By the 1600s, groups like the Maasai and Turkana ate beef exclusively.
Cattle provided meat, milk, butter, and blood.

When the Europeans arrived at the shores of Kenya, they brought with them
white potatoes, cucumbers, and tomatoes. The British imported thousands of
Indians for labor, and curries (spicy dishes made with curry spice),

(a flat, disk-shaped bread made of wheat flour, water, and salt) and
chutneys (a relish made of spices, herbs, and/or fruit) became a
traditional Sunday lunch for many Kenyans. 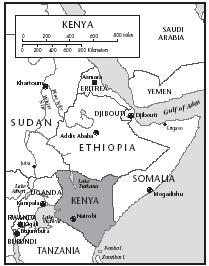 3 FOODS OF THE KENYANS

Kenya is a multi-racial society, the majority of people comprising native
ethnic groups. The rest of the population is Asian, Arab, and European.
The official languages of Kenya are Swahili and English.

Traditional Kenyan foods reflect the many different lifestyles of the
various groups in the country. Most Kenyan dishes are filling and
inexpensive to make. Staple foods consist mainly of corn, maize, potatoes,
and beans.

(a porridge made of maize) and meat are typically eaten inland, while the
coastal peoples eat a more varied diet.

The Maasai, cattle-herding peoples who live in Kenya and Tanzania, eat
simple foods, relying on cow and goat by-products (such as the
animal's meat and milk). The Maasai do not eat any wild game or
fish, depending only on the livestock they raise for food.

The Kikuyu and Gikuyu grow corn, beans, potatoes, and greens. They mash
all of these vegetables together to make

into balls and dip them into meat or vegetable stews. 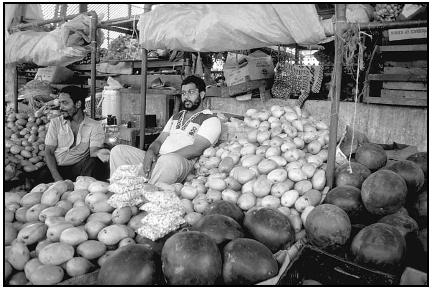 Two fruit and vegetable vendors chat while waiting for customers.
Kenyans enjoy both vegetable stews and meat stews, prepared with a
wide variety of vegetables.

The only place where a distinct cuisine has developed is on the eastern
coast, where Swahili dishes reflect the history of contact with the Arabs
and other Indian Ocean traders. They sailed in with dried fruits, rice,
and spices, which expanded the Swahili diet. Here, coconut and spices are
used heavily.

Although there is not a specific national cuisine, there are two national
dishes:

Maize (corn) is a Kenyan staple and the main ingredient of

, which is thick and similar to porridge. Many Kenyans eat this on a daily
basis. It takes a lot of practice to boil the porridge without burning it.

is usually eaten with meat, stews, or

which literally translates to "stretch the week." This
means that the food is used to stretch meals to last for the week.

is a combination of chopped spinach or kale (a leafy green vegetable)
that is fried with onions, tomatoes, maybe a green pepper, and any
leftover meat, if available. It is seasoned with salt and some pepper. The
traditional way of eating

is used to scoop sauces or stew. 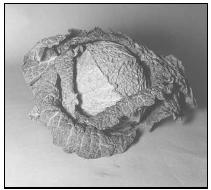 Sukuma Wiki is made from chopped kale (shown here) or collard
greens.

is roasted or grilled meat, usually goat. The process of grilling meat in
Kenya is different from the process of barbequing meat typically used in
the United States. Basting (moistening the meat) and the use of herbs and
seasonings (except salt and pepper) are not used in most Kenyan dishes.
When eating

at a restaurant, the diner chooses from a selection of meat that is
bought by the kilogram (1 kilogram equals about 2 pounds). It is grilled
plain and brought to the table sliced into bite-sized pieces. It is often
served with mashed vegetables.

The varied climate and geographical areas in Kenya are home to many
different types of fruits. Some examples are mangoes, papaya, pineapple,
watermelon, oranges, guavas, bananas (many varieties), coconuts, and
passion fruit. Passion fruit juice is sold everywhere and is the most
popular, known locally in English simply as "passion."

Kenya's religious heritage mirrors its ethnic history. About 65
percent of the population are Christians and 2 to 4 percent are Muslim.
The remainder practice traditional native beliefs.

Christmas in Kenya is a time for social gatherings and food. Visitors will
stop at the homes of friends and family, and food is served to everyone.
Christmas dinner is likely to be fish or

. Goat or beef is used for

, although goat is considered a greater delicacy. Vegetables, fruit, and

are often served with chutney.

One of the biggest celebrations in Kenya is Kenyatta Day (October 20). It
is in honor of Kenya's first president and patriot, Mzee Jomo
Kenyatta. During this holiday (and all observed holidays), schools and
businesses are closed. Celebrations include festivities such as dancing in
homes, bars, and nightclubs. Feasts of

candy, and bottled drinks, such as Fanta (orange soda), are common.

(meal) is usually a heavy staple food, such as

or potatoes, with a side of vegetables.

is typically served on a large dish where everyone can reach (using the
right hand). Fruit is usually eaten for dessert in place of sweets.

, a semisweet, flat doughnut, is usually eaten at

(coffee and tea in Swahili).

is served very milky and sweet. The tea, milk, and sugar are put into
cold water and brought to a boil. Kenyans also eat

at breakfast and usually dunk it into their coffee.

Lunch is the main

of the day. Meat such as beef, goat, or mutton (sheep) is most commonly
eaten. Other dishes can include

, a mix of beans (usually red kidney beans) and corn, and

, or mashed plantains (similar to a banana). Foods served at dinner are
much like what is served at lunch. 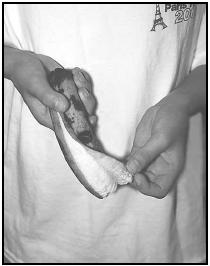 An easy way to peel the plantains for matoke is first to cut off the
tip and then slit the peel the length of the fruit.

A knife and fork are usually used when eating European cuisine in Kenya.
When eating the traditional Kenyan way, a piece of

held in the right hand, is used as a sort of utensil to scoop up food.
The Kiswahili word for "right" is

, which means "to eat with." The right hand is usually used
to pass and accept items. Use of the left hand is considered improper.
Eating customs vary throughout Kenya. For example, among the Samburu,
warriors avoid eating in front of women, men are often served first, and
children sometimes eat separately from adults.

Street vendors are found on almost any street corner in Kenya and offer a
variety of snacks.

are deep-fried pastry triangles stuffed with spiced minced meat and are
considered the most common snack. Corn on the cob is roasted on a wire
grill over a bed of hot coals and sold cheaply for a few Kenyan shillings
(one Kenya shilling equals about sixty U.S. cents). Another snack is
called

("bread eggs"), a wheat dough spread into a thin pancake,
filled with minced meat and raw egg, then folded. Sweets such as ice
cream, yogurt, and deep fried yams (eaten with a squeeze of lemon juice
and a sprinkling of chili powder), are offered as well. In rural areas,
children can be seen snacking on roasted maize (corn) and sugar cane.
Kenyan children like to snack on burgers and fries as well, which are sold
in fast food shops.

Kenyans enjoy eating in a variety of international restaurants and
fast-food chains. Fries with ketchup are popular, along with sausages,
eggs, fish, and chicken. Most fast food restaurants are located in
Nairobi, Kenya's capital city.

At the beginning of the twenty-first century, a prolonged drought
(especially affecting northern Kenya) was a major cause of malnutrition,
destroying food crops and forcing poorer families to live on meals of
maize. This lack of protein results in deficiency diseases, especially
with younger children. Symptoms of such diseases include fatigue and
lethargy. In children, lack of protein results in poor growth with
generalized swelling. A protuding round stomach is a common and visible
symptom of severe malnutrition. Skin rashes and hair loss are also common.

About 41 percent of the population of Kenya is classified as
undernourished by the World Bank. This means they do not receive adequate
nutrition in their diet. Of children under the age of five, about 23
percent are underweight, and over 34 percent are stunted (short for their
age).

More Specialities of the House.

Karibu: Welcome To the Cooking of Kenya

A Taste of Kenyan Cooking.

Department of African Studies at University of Pennsylvania. [Online]
Available