The Korean Peninsula is a large finger of land that extends south from the
northeastern border of China into the ocean parallel to Japan. It is
surrounded by the Sea of Japan and the East China Sea. Until World War II
(1939–1945), Korea was a single country. After World War II, Korea
was divided in half to form the Democratic People's Republic of
Korea (known as North Korea) with a communist form of government, and the
Republic of Korea (known as South Korea) with a democratic form of
government.

Both North Korea and South Korea have problems with air and water
pollution, and both governments have passed laws to control pollution.
Higher elevations are found in North Korea, while South Korea has fertile
plains suitable for agriculture in its southern region. The climate
supports agriculture, and South Korea grows enough rice to support its
population. The main rivers, the Han and the Kum, help to provide adequate
water supply for the agricultural lands.

Since the country was divided into North Korea and South Korea, the
government of North Korea has not welcomed outsiders. Because of this,
information about its food and the cooking style of its people is not
readily available. Most of the descriptions and recipes included here come
from South Korea, although the same foods are probably enjoyed by North
Koreans and people of Korean descent living anywhere in the world.

The seas surrounding the Korean peninsula—the Yellow and East China
seas, and the Sea of Japan—provide not only many types of seafood,
like tuna, king crab and squid, but moisture for the fertile soil needed
to grow rice and grains.

For centuries, the Koreans have eaten the products of the land and sea.
They began 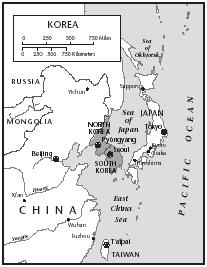 growing grains thousands of years ago, and rice cultivation was
introduced to some parts of the country around 2000 b.c. During this time
they also grew millet (a type of grass grown for its edible seed),
soybeans, red beans, and other grains. They cured and pickled fish, were
skilled in making wine and bean paste, and often used honey and oil in
cooking.

Chinese and Japanese invasions during the fourteenth through twentieth
centuries gave rise to a culinary influence on Korea that remains today.
Like the Chinese and Japanese, Koreans eat rice with almost every meal and
use chopsticks. Eating with chopsticks means the food is usually cut up
into little pieces that are easy to pick up. Food cut this size cooks
fast, which cuts down on the use of fuel.

Unlike China and Japan, however, Korea was never a tea-drinking nation.
Historically, China and Japan had to boil their water for it to be fit to
drink. Korea's water was pure, which led them to discover other
beverages, such as ginseng and ginger drinks (made from herbs of the same
name), wines, and spirits.

(ginger drink) is often served on joyous occasions during the winter, and
especially at New Year's.

Note: This step applies only if jujubes are being used. Skip this step if
using dates.

Makes about 10 servings. Soo Chunkwa will keep, refrigerated, for a few
days.

3 FOODS OF THE KOREANS

Korea shares many similarities with other Asian cuisines such as the
importance of rice and vegetables and cooking methods such as stir-frying,
steaming, and braising (food first browned in oil, then cooked slowly in a
liquid). As is true of the rest of Asia, Koreans eat far less meat than
people in the Western world. Red meat is scarce and very expensive, so it
is usually saved for special occasions. Chicken or seafood is more
commonly eaten.

Korean food is often very spicy. Red pepper paste, green onion, soy sauce,
bean paste, garlic, and ginger are just some of the many seasonings
Koreans use to flavor their dishes. The food is served with a bland grain
such as rice to cool the heat of the spices. Dried jujubes, available at Asian specialty markets, resemble
raspberries. One jujube is placed in each glass of soo chunkwa
(ginger drink). Before they can be used in most recipes, jujubes
must be presoaked.

The Korean way of preparing and eating their dishes makes for healthy
eating. Generally speaking, Koreans are thin people. Being overweight is
considered a sign of wealth and dignity and seen particularly among the
rich, and high officials.

A meal served for a group of people often includes several large dishes
and as many as twenty side dishes. Unlike other Asian cuisines, Korean
cuisine includes many uncooked vegetables served in the form of salads and
pickles. Traditional Korean meals include soup, served hot or cold
depending on the season, like

comes in a variety of flavors depending on family tradition. The main
ingredients are cabbage and radish, which are fermented with red chilies,
salt, and other vegetables.

is the traditional Korean custom of making

in the early winter to prepare for the cold months.

Kimchi is served with almost every meal in Korea. It is usually
homemade, but it may be found in many large grocery stores and
specialty markets.

(heen pop; white rice) remains the main staple and is the biggest crop
produced in South Korea. It can be eaten in many different ways. There are

(a sweet rice dish), and over fifty varieties of rice cakes.

Other common dishes include

(a meal of meat, fish, vegetables, eggs, nuts, and bean curd cooked
together in broth).

Traditional Korean holidays have developed under the influence of the
seasons, rural agricultural life, and the religions of Buddhism and
Confucianism. As of the twenty-first century, traditional holidays still
held significant meaning in the daily lives of the Korean people.

The Lunar New Year, or Sol, is the first day of the new year. Koreans
traditionally hold a memorial service for their ancestors, after which
they perform

, a formal bow of respect, to their elders as a New Year's
greeting. The day is always celebrated with a bowl of

, or rice cake soup. Other popular foods eaten on Lunar
New Year are

(noodles with meat and vegetables),

Honoring a family's ancestors is an important part of
Korea's heritage. Four generations of ancestors are honored on the
day before the anniversary of a person's death. Food is served in
dishes with special stands to prevent the plates from touching the table.
Food is arranged and combined
according to strict ancient customs. For example, at least three
different colors of fruits and vegetables are set on the table: red fruits
and fish to the east, and white fruits and meat to the west. A special
dish that may be served is

, which is served in a nine-compartment dish. These compartments are
filled with nine different kinds of brightly colored meats and vegetables.
These foods are wrapped in thin pancakes and eaten at the table.

Another traditional holiday in South Korea is called

, or Shampoo Day, on June 15. Friends and family gather at a stream or
waterfall to bathe in the clear water, a ceremony they believe will ward
off fevers for the rest of the year. A picnic meal is packed and may
include

There is little difference in what Koreans eat for breakfast, lunch, or
dinner. Breakfast, the biggest meal of the day, may include a cold soup,
such as

(pool-goh-gee; grilled beef) is one of Korea's best-known meat
dishes.


In Korea, Pulgogi is prepared on a small grill at the table.

(shee-guhm-chee nah-mool; spinach salad), pulgogi (pool-goh-gee; Korean
beef), and steamed chicken is eaten. Of course, all three meals would be
served with white rice and

. A good Korean cook will try to
include five colors at every meal: red, green, yellow, white, and black.
Koreans seldom serve dessert, but often eat fresh fruit instead.

Meals are considered an important event in the day to Koreans and much
time is spent in its preparation. In fact, Koreans find eating so
important they want to concentrate all of their attention on it, and
consider it impolite to talk while eating. They avoid conversation until
the end of the meal. At mealtime, the dishes of food are placed in the
middle of the table and individual bowls of rice are set in front of each
person.

The Korean table setting is much different than the table setting used in
the United States. The tables, finished with shiny red or black lacquer,
are only 10 inches high. Diners are seated on cushions placed on the floor
around the table. Beautiful patterns in mother-of-pearl decorate the
tables. When the table is not being used, it is hung on the wall like a
picture.

Students carry lunch boxes to school that are quite unlike those of U.S.
students. They are little tin boxes with several compartments built into
them for chopsticks, rice, dried fish, and other foods. Small children
have small chopsticks, and as they grow bigger, they use bigger
chopsticks.

For snacks at home, Korean students like to eat fruit, either fresh or
dried, and sometimes little cakes made from sugar, honey, dried fruit, and
rice flour. They are much less sweet tasting than the cookies and cakes
made in the United States. The popular

is always in the kitchen and easy to eat as a snack.

Almost all Koreans receive adequate nutrition in their diets, with the
World Bank reporting that less than 1 percent of the population is
malnourished and nearly all have access to adequate sanitation and safe
drinking water. Korean farmers grow enough rice to meet the
country's needs, and fruit growers produce abundant crops of
apples, pears, persimmons, and melons. The main vegetable crops are white
radish, known as

,
and cabbage. Both are used in

The Korean Kitchen: Classic Recipes from the Land of the Morning Calm.