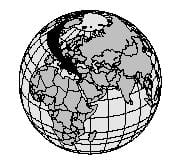 
Situated on the eastern coast of the Mediterranean Sea, Lebanon has an
area of 4,015 square miles (10,400 square kilometers), about three-fourths
the size of the state of Connecticut. The Lebanon Mountains are rugged.
East of the Lebanon Mountains is the Bekaa Valley, an extremely fertile
flatland. At the eastern flank of the Bekaa stands Mount Hermon,
straddling the border with Syria. Lebanon contains few rivers, and its
harbors are mostly shallow and small, with polluted coastal waters.
Lebanon has an extraordinarily varied climate: within a 45-minutes drive
in winter, spring, and fall, both skiing and swimming are possible. Less
than 30% of Lebanon's total area can support crop production.
Expansion of cultivated areas is limited by the arid and rugged nature of
the land.

A unique cultural history has helped to make Lebanese food the most
popular of all Middle Eastern cuisines. For most of its past, Lebanon has
been ruled by foreign powers that have influenced the types of food the
Lebanese ate. From 1516 to 1918, the Ottoman Turks controlled Lebanon and
introduced a variety of foods that have become staples in the Lebanese
diet, including olive oil, fresh bread,

(homemade yogurt), stuffed vegetables, and a variety of nuts. The
Ottomans also increased the popularity of lamb.

After the Ottomans were defeated in World War I (1914–1918), France
took control of Lebanon until 1946, when the country won its independence.
During this time, the French introduced some of their most widely eaten
foods, particularly treats such 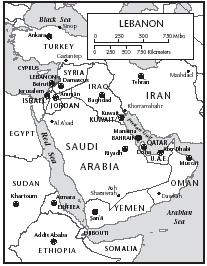 as flan, a caramel custard dessert dating back to the 1500s, and buttery
croissants.

The Lebanese themselves have also helped to bring foods of other cultures
into their diet. Ancient tribes journeyed throughout the Middle East,
carrying with them food that would not spoil easily, such as rice and
dates. These foods slowly became part of the Lebanese diet. As the tribes
wandered, they discovered new seasonings, fruits, and vegetables that they
could add to their everyday meals. Exotic ingredients from the Far East
(east and southeast Asia) and other areas of the world were often
discovered by these early tribes.

3 FOODS OF THE LEBANESE

Bread, a staple food in Lebanon, is served with almost every meal, most
often as a flat bread, or pita. It is so crucial to the Lebanese diet that
some Arabic dialects refer to it as

Fruit, vegetables, rice, and bread out-weigh the amount of meat eaten in
the average Lebanese meal. However, the most commonly eaten meats, poultry
and lamb, make up some of the country's most popular dishes. The
national dish,

), consists of a ground lamb and cracked wheat paste, similar to
paté.

was originally made by harshly pounding the lamb and kneading in the
spices and wheat. Those who were unfamiliar with this practice often found
it quite unpleasant, including the English food writer George Lassalle,
who described it as "frightening." Some rural villages
continue to prepare it this way.

, a variety of flavorful hot and cold dishes, is another important part of
the Lebanese diet. As many as forty small dishes are presented at once as
either appetizers or as a meal itself.

, cooked cubes of lamb, peppers, and onions), and pickled vegetables are
most popular. Lebanese meals are rarely served in courses, but presented
all at
once.

(a salad made with cracked wheat) and

(a lentil and rice dish) are also widely consumed.

, a sweet, flaky pastry, is usually associated with Greek cuisine.
However, the Lebanese have embraced the dessert and normally prepare it
with pistachio nuts, drizzled with rose-water syrup (the Greeks use
walnuts and honey).

(a colorless alcoholic beverage made with anise, also called
"Lion's Milk" because it is white), are most commonly
served with dessert. 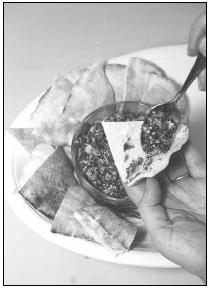 Tabbouleh, made from cracked wheat, parsley, tomatoes, onions, and
mint, may be served with pita triangles.

It seems as though the Lebanese are always participating in holiday
celebrations, especially religious holy days. This is because Lebanon is
home to two main religions: Islam and Christianity. Despite bitter
disagreements between them, the people of both religions continue to enjoy
their own traditional festive celebrations, which often include large
feasts among family and friends.

Muslims (believers of Islam) celebrate several holidays throughout the
year, though probably none are as important as the holiday of Ramadan.
During the entire ninth month of the Islamic calendar, Muslims avoid all
food and drink between sunrise and sunset. In some villages, a man beats a
drum through the streets, attempting to wake people before the sun rises
so that they may enjoy an early breakfast. A typical pre-dawn breakfast
might include grapefruit, pita bread with olive oil, a boiled egg, a cup
of

(yogurt), and tea. After the sun sets, Muslims gather with friends and
family to share in a delicious feast.

, meaning "festival that breaks the fast," marks the end of
Ramadan and food is generously shared with loved ones. The Feast of the
Sacrifice,

, is also celebrated with food and festivities. During this time, a sheep
is killed and eaten after returning from the

(the pilgrimage to Mecca). Many families donate a portion of their sheep
to the poor.

The most widely celebrated Christian holidays are Christmas and Easter.
Visiting friends and family at Christmas has become tradition. Prior to a
large chicken or turkey lunch, most guests are offered sugarcoated almonds
to snack on. Dessert is commonly

, a French Christmas cake shaped like a yule log. Homes are decorated with
tinsel, and Christmas trees are often adorned with orange peels cut into
various 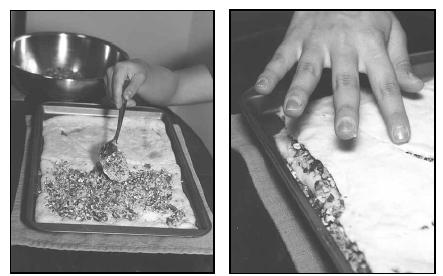 Sprinkle the baked bottom crust with the pecan-sugar mixture. Spread
a second layer of crescent roll dough over the pecan mixture,
smoothing the dough carefully to seal the perforations.

shapes. Easter is probably the most important holiday for Christians.
Children may celebrate by playing a Lebanese Easter egg game called

, in which they compete to see who has the strongest, unbreakable
hard-boiled egg. After a long day of excitement, families sit down to
enjoy a lamb dinner, often followed by

Labor Day (May 1) and Independence Day (November 22) are popularly
celebrated national holidays. Both attract people of all ages to partake
in food and festivities. 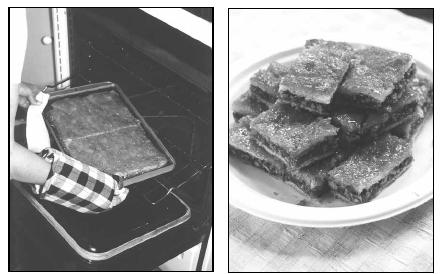 The honey, poured over the pastry before baking, creates a sweet,
sticky glaze over the baklava. The baklava may be cut into bars
before serving.

Arabs have a reputation for hospitality towards guests that come to visit,
even if the visit was not planned (which most are not). Food is almost
guaranteed to be delicious and filling.

A rural family will often pick fruit and vegetables from their own
gardens. If they do not have what they need, a

(street market shop) can provide them with any food from eggplant to mint
leaves. Because bread is essential with almost every meal, rural women
travel to the village bakery, called the

, to bake their breads and pastries for the day, as well as to catch up on
gossip.

Lunch, the largest of the three meals eaten each day, is usually served
around 2:00 p.m.

, the national dish, is frequently the main meal.

(cubes of cooked meat on a skewer) and

(ground meat mixed with herbs and spices) are popular too.

or a fresh bowl of melon will likely make for a sweet dessert. Most
children nap after such a plentiful afternoon meal.

Unlike in the United States, milk is rarely drunk with meals. Adults will
often enjoy beer, wine, or

(a soft drink made from raisins and served with pine nuts). International
restaurants are widespread throughout the country. French, Italian,
German, Austrian, Scandinavian, Greek, Chinese, American, and Indian food
are readily available. In addition, U.S. fast food chains are often
bustling with people.

The World Bank reports only about 2 percent of the Lebanese population is
classified as undernourished, which means they do not receive sufficient
nutrition in their diets. About 63 percent has adequate access to
sanitation, and 100 percent to safe drinking water. Ninety-five percent of
the population has access to health care services. Of children under the
age of five, about 3 percent are underweight, and 12 percent are stunted
(short for their age).

War and violence during the 1980s and 1990s has had a significant impact
on the development of many Lebanese children. Between 1982 and 1990, there
were over 144,000 deaths due to an Israeli invasion. As a result, many
children suffer from post-traumatic stress disorders. According to law,
children over the age of eight are allowed to work a maximum of seven
hours a day, which also contributes to childrens' stress.

Enchantment of the World: Lebanon

A Taste of Lebanon

Recipes from an Arabian Night: Traditional Cooking from North Africa and
the Middle East

Cultures of the World: Lebanon