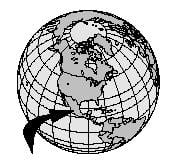 
Mexico is located directly south of the United States. It is slightly less
than three times the size of Texas. Two major mountain ranges run through
the country's interior: the Sierra Madre Oriental on the east and
the Sierra Madre Occidental on the west. Between the mountain chains lies
the great central highland plateau. Mexico borders the Pacific Ocean to
the west and the Gulf of Mexico and Caribbean Sea to the east.

Mexico has a wide range of natural environments, but temperatures are
generally mild year-round. The coastal plains and lower areas of southern
Mexico are usually hot and humid. Mexico City, the country's
capital, and other inland areas are at higher elevations and are generally
drier. Annual rainfall may exceed 200 inches in the more tropical zones of
the coastal areas, while parts of Baja California (a long, narrow
peninsula located just south of California) receive very little
precipitation. Desert-like conditions exist in the north.

Although only about one-fifth of the country remains covered with
vegetation, much of the country's wildlife are still in existence.
Some animals include rabbits, snakes, monkeys, jaguars, anteaters, deer,
toucans, parrots, and some tropical reptiles, such as the mighty boa
constrictor.

When the Europeans arrived in Mexico in 1517, Mexico’s indigenous (native)
peoples included the Aztecs of the central interior, the Maya in the
Yucatan Peninsula, and the Zapotec in the south. Their diet consisted
mainly of corn, beans, peppers, tomatoes, sweet potatoes, squash, and
herbs. Chocolate, native to Mexico, was considered a drink fit for
royalty. The Indians occasionally When the Spanish explorers landed in Mexico, they introduced livestock,
including cattle, sheep, pigs, goats, and chickens. On later journeys to
this "New World," the Spanish brought plants from Asia, such
as sugarcane and wheat.

Spain ruled over Mexico for over 300 years. By the time Mexico gained its
independence, Spain had left its mark on its people and culture, including
their cuisine.

3 FOODS OF THE MEXICANS

Corn is the basis of the Mexican diet, as it has been for thousands of
years. It can be found in almost every meal, usually in the form of the
tortilla (flatbread). Corn can also be boiled to produce

, a hearty corn stew. Popular fruits and vegetables are tomatoes,

(from the prickly pear cactus). Though beef is consumed, chicken and pork
are more common. The variety of chilies includes the widely known
jalapeño, as well as the

. Chilies give Mexican cooking a distinctive flavor, which is often
enhanced with herbs, such as cilantro and thyme, and spices, including
cumin, cinnamon, and cloves. Cheese and eggs round out the diet. Seafood
is most common in coastal dishes.

Though Mexican cuisine is a blend of indigenous (Indian) and Spanish
influences, most Mexicans continue to eat more native foods, such as corn,
beans, and peppers. Such foods are cheap and widely available. Bread and
pastries are sold, but the tortilla, homemade or bought daily at the local

(tortilla stand), is the basis of the typical meal. Flour tortillas are
also eaten, especially in northern Mexico, but the corn variety is most
popular.

American soft drinks, such as Coca-Cola, have become popular in Mexico in
recent decades, but fruit-flavored soda drinks are also widely consumed,
as are fresh fruit juices, available from street vendors.

, an import from Spain, and beer ( 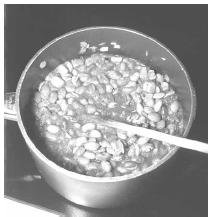 Frijoles are simmered over low heat until most the liquid has been
absorbed and the beans and onion are soft.


A pot of beans can be found simmering on the back burner in most Mexican
kitchens. They may be eaten with any meal of the day, including
breakfast.

Serve as a side dish with tacos, or as a main dish with warmed corn
tortillas.


Though refried beans can be bought in cans in the grocery store,
homemade Frijoles Refritos (Refried Beans) are much more flavorful.


The olla is the earthenware mug in which this aromatic coffee is often
served.

During the centuries of Spanish rule over Mexico, the majority of Mexicans
were forced to convert to Christianity. Christian holidays, including

(Christmas), are celebrated with great enjoyment and family meals. Many
festivities include native Indian traditions. During

(Holy Week) leading up to Easter, meat is typically not consumed.

(Three Kings Day or Epiphany) on January 6 and

(Day of the Dead) on October 30 are occasions for more celebration,
including the consumption of specific foods. On

is eaten. A typical menu for

during which Mexicans decorate and picnic on the graves of their dead
relatives, includes

(meat-filled turnovers, an import from Spain) and

(steamed corn husks with various fillings, including shredded pork). Also
included are chicken or turkey with

(pronounced MO-lay, it is a distinctive sauce combining chocolate,
chilies, and spices),

(a sweet bread, baked in a ring and with a tiny plastic skeleton hidden
inside), and

On each of the eight nights before Christmas, friends and neighbors travel
from house to house, stopping at selected houses to sing or recite lines,
asking for lodging. At the last door, they are welcomed inside for
festivities, including the breaking of the

, a papier-mâché animal filled with candies. Other typical foods
during this time include Many Mexicans buy tortillas made fresh daily at the local
tortillería (tortilla stand). Corn tortillas are the basis for
most typical meals. Flour tortillas are also eaten, especially in
northern Mexico, but the corn variety is most popular.


This is a truly Mexican version of the traditional Spanish bread.

, served with tortillas and beans, is also a popular breakfast dish.

It may consist of soup, a meat dish, rice, tortillas, coffee, and
dessert.

, supper, is typically a light meal eaten after 9 p.m. However, in Mexico
City and other urban areas, dinner can be an elaborate meal, eaten in one
of many restaurants.

(literally, "little whims") and are eaten at any time of
the day. An

might be a beefsteak taco, a tostada (a fried, flat tortilla, often
topped with chopped tomatoes, onion, lettuce, and cilantro), or a

(a lightly grilled corn dough, often served with salsa or beans). A
schoolchild’s lunch may consist of a

(a sandwich of cheese, avocado, and sausage, or chicken on a bread roll)
or a

(a sweet root vegetable) with a wedge of lime, and 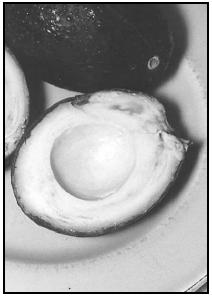 The creamy flesh of half an avocado will be cut into small cubes for
Pico de Gallo (Mexican Salsa). 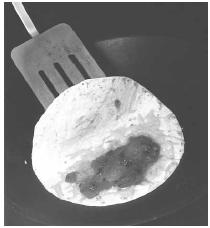 The tortilla, topped with shredded cheese and a heaping spoonful of
Pico de Gallo (salsa), is heated in a dry skillet. Lift the edge of
the tortilla to check on its progress. 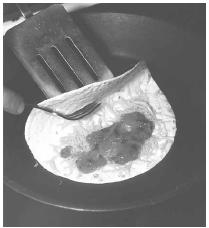 When the underside of the tortilla is golden in color, fold it in
half to form an envelope and cook for another minute to allow the
cheese to melt completely.

Although almost one-fourth of all Mexicans earn their living from farming,
agriculture only accounts for a small percentage of the country's
gross national product. The government provides protection for farmers by 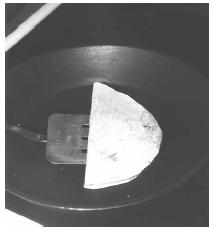 One quesadilla per person is enough as a snack, but two might be
served as the main course for lunch or as a light supper.

supporting the prices of agricultural products. Mexico is self-sufficient
in most fruits and vegetables (that is, Mexican farmers grow enough to
meet the needs of the people), and in beans, rice, and sugar. However,
many people living in rural areas are poor, and are barely able to grow
enough food to feed their own families.


Technically a sopa seca, or dry soup, this dish is often served before
the main course.

Children as young as 14 may work, but there are strict laws about the
conditions and hours of employment. However, young people working on farms
are often working for their family, so the laws are not enforced. Most
children in Mexico receive adequate nutrition, although there is a small
percentage of very poor children whose diets lack basic nutrients.

A Taste of Mexico.

Days of the Dead.