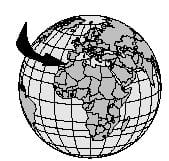 
Morocco is located in the northwestern corner of Africa. Morocco is
slightly larger in area than California, and its territory has three
different regions. The northern coast along the Mediterranean Sea is made
up of fertile land that rises to elevations of about 8,000 feet (2,400
meters). The Atlas Mountains run between the Atlantic coast in the
southwest to the Mediterranean Sea in the northeast. Finally, the semiarid
area in the south and east known as the Western Sahara connects Morocco
with the vast African Sahara Desert.

Morocco faces a problem with

Desertification is the process where fertile land becomes barren and
desert-like. Desertification may be caused by forces of nature, such as
lack of rainfall or drought. Humans contribute to desertification when
they clear away all the trees or allow their livestock to graze too much
so that they eat away all plants. These practices leave no plants to hold
the soil in place, so wind and rain can carry away the fertile topsoil.
Morocco also has a problem with water pollution from oil spills, poor
sewage treatment practices, and the use of strong pesticides.

In the northwest, agriculture in Morocco thrives. Except in years when
there is severe drought, Moroccan farmers are able to supply the country
with enough food.

Nomads called Berbers were the first inhabitants of Morocco over two
thousand years ago. They used local ingredients, such as olives, figs, and
dates, to prepare lamb and poultry stews. Over time, traders and
conquering nations introduced new food customs. Among them were the
Phoenicians, Carthaginians, and Romans. However, the strongest influence
on native cooking was the Arab invasion in the seventh century


The Arabs brought with them new breads and other foods made from grains.
They introduced spices including cinnamon, ginger, saffron, cumin, and
caraway. They also introduced sweet-and-sour cooking, which they had
learned from the Persians. Moors from Andalusia in southern Spain also
influenced Moroccan cooking. The

a popular pigeon pie in Morocco, was originally a Moorish dish. In modern
times, the French and the British made contributions to Moroccan cuisine.

3 FOODS OF THE MOROCCANS

Morocco, unlike most other African countries, produces all the food it
needs to feed its people. Its many home-grown fruits and vegetables
include oranges, melons, tomatoes, sweet and hot peppers, and potatoes.
Five more native products that are especially important in Moroccan
cooking are lemons, olives, figs, dates, and almonds. Located on the coast
of the Mediterranean Sea, the country is rich in fish and seafood. Beef is
not plentiful, so meals are usually built around lamb or poultry.

Flat, round Moroccan bread is eaten at every meal. The Moroccan national
dish is the tajine, a lamb or poultry stew. Other common ingredients may
include almonds, hard-boiled eggs, prunes, lemons, tomatoes, and other
vegetables. The tajine, like other Moroccan dishes, is known for its
distinctive flavoring, which comes from spices including saffron, cumin,
coriander, cinnamon, ginger, and ground red pepper. The tajine's
name is taken from the distinctive earthenware dish with a cone-shaped top
in which it is cooked and served. Another Moroccan dietary staple is
couscous, made from fine grains of a wheat product called semolina. It is
served many different ways, with vegetables, meat, or seafood.

Sweets play a very important role in the Moroccan diet. Every household
has a supply of homemade sweet desserts made from almonds, honey, and
other ingredients. Mint tea is served with every meal in Morocco. It is
sweetened while it is still in the pot.

Chicken Tajine with Almonds and Prunes 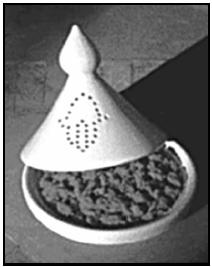 In Morocco, tajine is the name of both the stew and the covered clay
pot it is baked in. The tajine may be called the "Moroccan
crockpot" because it is used to slow-cook meat dishes.

Muslim dietary restrictions prohibit the consumption of pork and alcohol.
During the holy season of Ramadan, when Muslims fast during the day, a
thick soup called

is served at night. A bowl of

which is made with beans and lamb, is served with fresh dates. It is
served both at home and in cafes. For the holiday Eid al-Fitr, which marks
the end of Ramadan, a holiday feast is prepared. A popular dish at this
feast is

made with pigeon meat wrapped in pastry dough. More than 100 layers of
pastry dough may be used.

The Muslim feast day of Eid el Kebir takes place seventy days after
Ramadan. For this holiday, a sheep is roasted on a spit and served whole
at the table. Each person cuts off a piece and dips it into a dish of
cumin. Rich date bars called

are a popular dessert at many festive occasions. After baking, Mescouta (Date Cookies) are rolled in
confectioners' sugar. A shopper selects lemons from the stock at an open-air market.
Moroccan cooking uses ingredients common to North Africa, such as
lemons, olives, figs, dates, and almonds.

Moroccans eat their meals at low round tables, sitting on cushions on the
floor. They eat with their hands instead of silverware, using the thumb
and first two fingers of their right hands. They also use pieces of bread
to soak up sauces and carry food to the mouth. Small warmed, damp towels
are passed around before the meal to make sure everyone's hands are
clean. Most meals consist of a single main dish, often a stew, a couscous
dish, or a hearty soup. It is served with bread, salad, cold vegetables,
and couscous or rice on the side. A typical breakfast might include

(pancakes), and bread. Two breakfast favorites that may sound exotic to
Westerners are lambs' heads and calves' feet


Although Moroccans love sweets, they are usually saved for special
occasions. With everyday meals, the most common dessert is fresh fruit.

The sweetened mint tea that comes with every meal is served a special way.
It is brewed in a silver teapot and served in small glasses. When the tea
is poured, the pot is held high above the glasses to let air mix with the
tea. Tea is served not only at home but also in public places. In stores,
merchants often offer tea to their customers.

Morocco is famous for the wide range of delicious foods sold by its many
street vendors. These include soup, shish kebab, roasted chickpeas, and
salads. Both full meals and light snacks are sold. A favorite purchase is
sugared doughnuts tied together on a string to carry home.

According to a report by the World Bank, about 5 percent of the total
population of Morocco are undernourished, and 58 percent of the total
population have access to adequate sanitation (clean, sanitary toilet
facilities). Some Moroccan children do not receive adequate nutrition. Ten
percent of children under five are underweight for their age, while 24
percent are short for their age.
Both of these statistics reflect poor nutrition for the youngest children
in Morocco.

The Book of North African Cooking.

Cultures of the World: Morocco.

Holidays of the World Cookbook for Students.