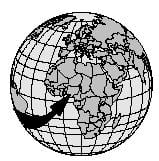 
The name Nigeria is taken from the Niger River, which plays an important
part in Nigerian lives. Not only is it a transportation highway, it is an
excellent source of fish, including carp, Nile perch, and catfish. It also
provides the water needed to cultivate crops.

Nigeria is located on the west coast of Africa at the inner corner of the
Gulf of Guinea (part of the Atlantic Ocean). Its land area is comparable
to being about twice the size of California.

An area of mangrove (a type of tropical tree) swamp forest lines the coast
of Nigeria. Beyond the forest lies a wide tropical forest, then a plateau
that leads to the Shebshi Mountains (on the eastern side of the country).
The extreme north borders on the Sahara Desert.

Many different climates mirror the varied land regions, although Nigeria
is mostly in a tropical zone. On the coast, it is very humid, and the
nights are hot. Inland there is a wet season from April to October and a
dry season from November to March.

Trade was largely responsible for changing the flavors of African cuisine.
Before trading between continents began, main staples included rice,
millet (a type of grain), and lentils. The Portuguese were the first
Europeans to reach Nigeria. There, they established a slave trade center
around the 1400s. Portuguese explorers and traders introduced cassava to
western Africa (including present-day Nigeria) through their trade with
the African coasts and nearby islands. British, Dutch, and other European
traders later competed for control of the trade. By the 1700s, the British
were the main traders of slaves on the Nigerian coast.

European explorers and traders introduced several food staples to western
Africa, such as beans, cassava, and maize. These foods were introduced to
the explorers 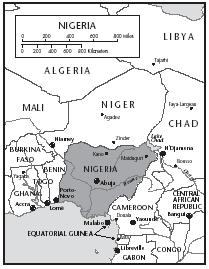 while on journeys to America; they, in turn, brought the foods to western
Africa. Asian seasonings such as pepper, cinnamon, and nutmeg were also
brought back, and are still used to flavor dishes.

3 FOODS OF THE NIGERIANS

Nigeria is one of the world's most ethnically diverse countries.
The Hausa and Yoruba make up around 21 percent of the population; the
Igbo/Ibo, 18 percent; the Fulani, around 11 percent; and Ibibio, 5
percent. Various other groups make up the remaining 23 percent.

Nigeria has such a variety of people and cultures that it is difficult to
pick one national dish. Each area has its own regional favorite that
depends on customs, tradition, and religion. The different foods available
also depend on the season: the "hungry season" is before the
rains arrive in March, and the "season of surplus" follows
the harvest in October and November. Fruits, however, are enjoyed
year-round. A large part of Nigeria lies in the tropics, where many fruits
are available. Some of the popular fruits are oranges, melons,
grapefruits, limes, mangoes, bananas, and pineapples.

People of the northern region (mostly Muslim, whose beliefs prohibit
eating pork) have diets based on beans, sorghum (a type of grain), and
brown rice. The Hausa people of this region also like to eat meat in the
form of

The people from the eastern part of Nigeria, mostly Igbo/Ibo, eat

(cassava powder) dumplings, pumpkins, and yams. Yams are usually eaten in
place of potatoes and are an important part of the Nigerian diet. However,
African yams are different than Western yams. They are pale, barely sweet,
and are not commonly found in United States supermarkets. 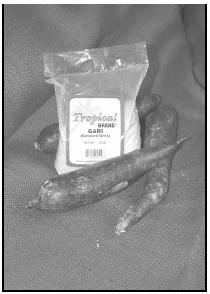 Cassava is a firm root vegetable with a shiny white skin and creamy
white flesh. West Africans use it to make flour, called gari.
Packaged gari can be purchased in specialty stores worldwide.

The Yoruba people of the southwest and central areas eat

with local varieties of

(okra) and spinach in stews or soups. They also like to eat mashed yams
or mashed cassava.

Near the coast of the Gulf of Guinea, Nigerians prefer eating seafood
stews (made with fish, shrimp, crab, and lobster), yams, rice, and
vegetables. Fish is important to the Nigerian diet since it is one of only
a few sources of protein. A common way coastal Nigerians prepare fish is
to make a marinade of ginger, tomatoes, and cayenne pepper, and then cook
the fish in peanut oil.

People living in the cities tend to buy their food from "chop
bars" (bars that sell food), street vendors, hawkers (peddlers who
shout what they are selling), or from restaurants. They may purchase
dishes such as

, a steamed pudding made from corn and ripe plantains, and

, a steamed cake of ground dried beans and fish. These dishes may be
served with


Nigerian stews, such as

(made with fish and yams), are typically spicy and eaten with rice, yams,
cassava, and corn. Peppers and chilies are used regularly in dishes and as
a relish. A Yoruba Proverb says, "The man that eats no pepper is
weak, pepper is the staff of life…"

Nigerians practice traditional African religious beliefs in addition to
various branches of Islam and Christianity. Muslims make up 45 percent of
the population. Muslim and 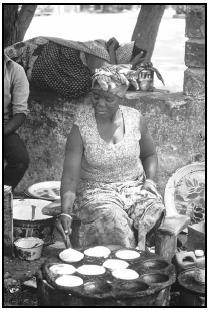 Vendors set up at the roadside, where customers stop for a snack or
light meal.

Christian holidays include the end of Ramadan (a month of fasting),
Easter, Good Friday, and Christmas. Nigerians return to their villages for
Christmas to be with their families. In the afternoon, children open gifts
and go from house to house, singing carols and hoping for candy and
cookies. A Christmas feast may include


African yams are not readily available elsewhere in the world, so
regular yams may be substituted.

Besides religious holidays, there are many cultural festivals throughout
the year. The Argungu Fish and Cultural Festival is held on the banks of
the River Sokoto. Several months before the festival, the River Sokoto is
dammed (blocked at a certain point). When the celebration begins, hundreds
of fishermen jump into the river at once to scare the fish into the air
and into waiting nets.

Igbo Day is a festival of

, which means, "new-yam eating." It is held by the Igbo
people in Nigeria in August and is a day to celebrate the end of the
cultivation season. The oldest man in the community performs the solemn
ritual of eating the first new yam. This ritual is meant to express the
community's appreciation to the gods for making the harvest of farm
crops possible. Only yams are served at the festival.

Many Nigerians rise as early as 5

, when a small breakfast is eaten to begin their day. Breakfast usually
consists of rice and mangoes, or stewed soybeans.

(fried plantains) is a common dish, as well as leftovers from the night
before.

Lunch is eaten around 11

and considered the most important meal of the day. A late dinner may be
served with dishes similar to those offered at lunch. Most Nigerian meals
are made up of one course and are cooked outside over an open fire (gas
and kerosene stoves are sometimes used, but the two fuels are very
expensive for many Nigerians). Dishes such as

may be served at lunch. Soups and stews are common lunchtime foods, eaten
with hands cupped like a spoon. Many Nigerians only use their right hand.
In southern Nigeria, two favorite soups are

Lunch and evening meals are typically served on large communal plates and
shared among children according to their gender and age. Young children
may eat from a dish with their mother, but when they reach the age of
seven or eight, the boys and girls are separated and meals are eaten with
members of the same sex.


Plantains are slightly larger than bananas and can be found in most
supermarkets. When ripe, their skins are yellowish green or yellow (or
black if extremely ripe). Plantains do not taste sweet, like yellow
bananas. 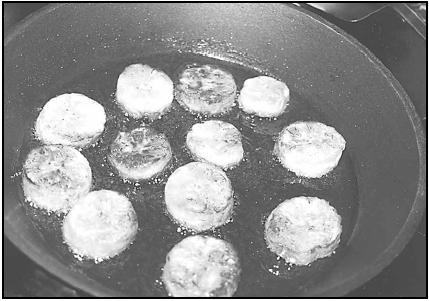 Dodo (fried plantain slices) sizzle in the frying pan. Fried
plantains are often served for breakfast or as a snack.

Nigerians enjoy many different snacks that are eaten throughout the day.
Some examples are fried yam chips, boiled groundnuts, and meat pastries.

which is a puffy, deep-fried cake made with black-eyes peas, is sometimes
eaten with chili dip. Other snacks are

, a hot and spicy kebab, and a few sweets like

(fried pastries in strips). Snack foods are an important part of a
child's diet. Fresh fruits (mangoes are a favorite to many), fried
bean cakes, cookies, or candy are commonly sold by street vendors. Snacks
provide an opportunity for children to eat on their own, without having to
share with siblings.

About 8 percent of the population of Nigeria are classified as
undernourished by the World Bank. This means they do not receive adequate
nutrition in their diet. Of children under the age of five, about 39
percent are underweight, and over 39 percent are stunted (short for their
age).

Many families are fairly self-sufficient where food is concerned. They
harvest their own food crops, such as yams, cassava, corn, and millet.

A Taste of Africa