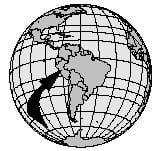 
Peru is South America's third-largest country, with an area of
496,226 square miles (1,285,220 square kilometers), slightly smaller than
the state of Alaska. Peru is divided into three contrasting topographical
regions: the coast, the Andean highlands, and the Amazon rainforest to the
east, with 18 rivers and 200 tributaries. The Peruvian Andes are divided
into three chains. The western mountain chain runs parallel to the coast
and forms the Peruvian continental divide. Less regular are the Cordillera
Central and Cordillera Oriental. Lake Titicaca (Lago Titicaca), the
highest navigable lake in the world (about 12,500 feet/3,800 meters high),
lies partly in Peru and partly in Bolivia.

These early nomadic (roaming) tribesmen relied on the hunting of animals
and the gathering of fruits and plants to survive. By 5000

, small communities were established and the early cultivation of cotton,
chili peppers, beans, squash, and maize (similar to corn) began. Most of
the early settlers lived near the coast, where the wet climate allowed for
planted seeds to grow.

One of the world's most popular vegetables,

(potatoes), were first grown in Peru. The earliest remains of potatoes
have been discovered at archeological sites in southern and eastern Peru,
dating as far back as 400

However, it was not until the 1400s that Europeans first came in contact
with the potato. They took the vegetable back to Europe, where it was slow
to gain acceptance. Europe now cultivates the largest number of potatoes,
but Peru continues to produce the largest potato varieties and has been
referred to as the "Potato Capital of the World." Potatoes
were not the only vegetable in ancient Peru, however. Avocado 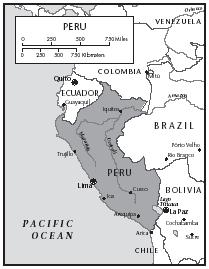 
The Incas came to power in the 1400s. They survived mostly on maize and
potatoes that they planted on terraces that they carved out of steep
hillsides (which can still be seen today). Their empire was short-lived,
however. In 1528, the Spanish conquistador Francisco Pizarro discovered
Peru and was intrigued by the riches of the Inca Empire. The Spanish
helped to introduce chicken, pork, and lamb to the Incas. In return, the
Incas introduced the Spanish to a wide variety of potatoes and

(chili peppers). As the Spanish gained control, they demanded that the
natives grow such European crops as wheat, barley, beans, and carrots. As
European disease struck the Incas and a shortage of labor arose, slaves
from Africa were brought over to work on the new plantations. Africans
contributed such foods as

(anise-sweetened, deep-fried pastries made from a pumpkin dough), to the
Peruvian cuisine, as did Polynesians from the Pacific Islands, the
Chinese, and the Japanese.

3 FOODS OF THE PERUVIANS

The Peruvian cuisine largely consists of spicy dishes that originated as a
blend of Spanish and indigenous foods. Such dishes are often referred to
as

(chili) is the most popular spice in Peru and is used in a variety of
ways to give food extra flavor. Mint, oregano, basil, parsley, and
cilantro are also included in Peruvian dishes, particularly soups and
stews. Aside from spices, however, potatoes, rice, beans, fish, and
various grains are essential staples (foods eaten nearly everyday) in the
Peruvian diet.

Peru's unique variety of climates and landscapes has helped to make
the Peruvian menus some of the most diverse in South America. Such
geographical variety gives Peru distinct culinary regions that are 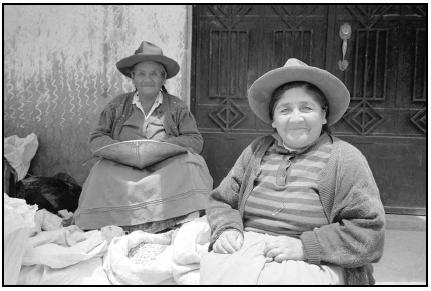 The diet of people living in the highlands includes corn, potatoes,
and rice. These women offer sacks of dried corn and other grains to
shoppers at a market near Lake Titicaca.

divided into coastal, mountainous/highland, and tropical. In addition,
the impact of various ethnic influences can be seen through indigenous
(native), Spanish, Asian, and African cooking styles and dishes.

The Pacific Ocean provides Peru with a wide variety of seafood,
particularly for those who live near the coast.

—fish, shrimp, scallops, or squid marinated in a lime and pepper
mixture—might be considered one of the country's national
dishes, due to its overwhelming popularity. It is often served with
corn-on-the-cob,

(toasted corn), or sweet potatoes. Salads in this region are also common,
particularly

The mountainous/highland diet closely resembles food the Incas prepared
hundreds of years ago. Basic staples of potatoes, corn, rice, and various
meats (especially beef and pork) are common ingredients in the highland
cuisine.

(corn on the cob with cheese) and

(deep-fried pork and chicken),
and

(meat cooked over a hot stone pit) are common meat dishes in this area.
Soups containing an abundance of spices, onions, and eggs, as well as
freshly caught fish from Lake Titicaca (particularly trout), help satisfy
the highlanders' appetites.

Meats and fresh fruits and vegetables are the basis of the tropical
Peruvian diet. Bananas, plantains (similar to the banana), and yucca
(similar to a yam) are readily available, and therefore are eaten in great
quantities. Inhabitants of the tropical region also enjoy a variety of
fish, wild game (such as boars, monkeys, pigs, deer, and chickens), and
plenty of rice.

Choclo con Queso (Corn on the Cob with Cheese)

Street vendors throughout the country often sell some of Peru's
most beloved food and drinks. Coconut-, chocolate-, and lemon-flavored

(cakes) are sweet and loved by Peruvians of all ages.

(ice cream) is a favorite among children. Snacks such as fried plantain
and

(banana chips) are widely available, as is Inka Cola, a Peruvian
bubble-gum-flavored soft drink. What is not available from vendors will
likely be sold at a local meat or produce market or a local 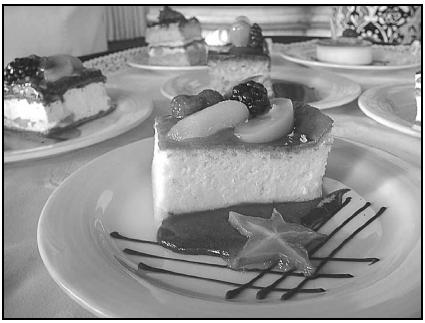 Flan, a sweet dessert garnished here with a slice of star fruit, is
a favorite in restaurants throughout Peru.

As a result of Peru's heavy Spanish influence, most Peruvians (90
percent) are devout Catholics. Christian holidays such as Easter,
Christmas, and All Saints' Day are joyously celebrated throughout
the country, often with fireworks, bullfights, dancing, and roast pig. The
remainder of the population adheres to indigenous beliefs, believing in
the gods and spirits the Incas once did hundreds of years ago. Many
Christian holidays coincide with existing traditional festivals, allowing
most Peruvians, regardless of differences in beliefs, to celebrate
together.

Christmas brings great joy to the Christians of Peru, especially children
who await the arrival of Santa Claus. Families use the holiday time to
travel to the homes of family and close friends. Because of the number of
people rushing about through Peru's streets, vendors rush to sell
holiday foods and other goods to passing people. Sweet mango juice, bakery
rolls, and homemade
doughnuts coated with sugar and syrup are Christmas favorites. Flan,
caramel custard enjoyed throughout Central and South American countries
(as well as Spain, the Philippines, and the United States), is also a
dessert enjoyed by Peruvians.

(kar-nah-VAH-lays; Carnival) is an elaborately celebrated national
holiday that takes place a few days before Lent. It is the last
opportunity for people to drink and dance before the fasting period of
Lent begins, when such activities are not allowed. During these few days,
some practice native traditions of rounding up wild game to present to a
priest or mayor, who in return provides

and cocoa leaves. The offering of the animals dates back several hundred
years to the Incas, who used to give offerings of food to the gods in hope
for a good harvest.

(potatoes with cheese) is a popular meal during Carnival.

Peruvians are extremely hospitable and enjoy preparing and eating meals
with company. Guests often consider being invited for dinner as a
semiformal occasion. Nice clothes are worn and a small gift of flowers,
chocolates, or wine is offered to the host on such occasions.

Most of the time, however, Peruvians simply prepare meals for themselves.
Meals consumed by a typical village family often depend on the altitude of
their village and what crops can thrive there. People living in
mountainous areas can grow potatoes and select grains, as well as raise
llamas, sheep, goats, and cattle. At lower altitudes, fruits and
vegetables such as lemons, limes,

(chilies) can be cultivated.

Villagers are often responsible for their own land and must spend much of
the day tending to it. As a result, a villager's day begins early,
usually around dawn. The woman of the house will begin her day preparing
an herbal tea called

(MAH-tay) and various foods for her family. A light

(coffee). The main meal of the day is

(lunch), which the woman of the house typically begins preparing while
her family eats

in the early morning.

is important so workers will not be hungry in the fields. It may consist
of a thick broth of potatoes, corn, and barley,

, a beer made of fermented maize, while children might prefer

(dinner) is often the most filling, despite

typically being the main meal of the day. Potatoes will almost always
make up one of the two to three dishes served for

(boiled dried corn) with meat or the popular

(marinated seafood) may complete lunch or dinner. Children may drink

(a soft drink made from maize) as a refreshing accompaniment to most
meals.

Peruvians enjoy sweets, whether it is an extra-sweet soft drink or
honey-filled dessert.

(rice and
milk) are sold by street vendors throughout the country. Shish kebabs,
seafood, fruit juice,

(meat- or cheese-filled pies), and other popular Peruvian fare are also
sold by vendors.

Many Peruvian children do not eat at midday during school hours. However,
a combination of

, noodles, beans, and potatoes is commonly eaten among school children.

About 19 percent of the population of Peru are classified as
undernourished by the World Bank. This means they do not receive adequate
nutrition in their diet. Of children under the age of five, about 8
percent are underweight, and over one-quarter are stunted (short for their
age).

In a 1992–1993 census, it was found that nearly 22 percent of
children aged 4-years-old and younger suffered from a serious Vitamin A
deficiency. A lack of this vitamin can lead to blindness. In addition,
iodine deficiencies have caused nearly one-third of school age children to
develop goiter, an inflammation of the thyroid gland (usually in the
neck). Protein deficiencies are declining, thanks to the introduction of
high-protein maize, according to the United States Mission to the European
Union. High levels of protein can prevent malnourishment in children
growing up in developing nations, such as Peru. Organizations such as
PROKID (also known as Help for Poor Peruvian Children) are helping to make
a difference. Established in October 2000, one of the goals of the
organization is to educate mothers about the nutritional needs of their
children.

Peru: Cultures of the World


The Rough Guide to Peru

Peru: The Land of the Incas. [Online] Available