Polish cuisine is a style of cooking and food preparation originating in or widely popular in Poland. Polish cuisine has evolved over the centuries to become very eclectic due to Poland’s history. Polish cuisine shares many similarities with other West Slavic countries like neighbouring Czech and Slovak.

Poland is in Eastern Europe. It is a little smaller than New Mexico, and has lowlands, a narrow coastal area with rocky cliffs, and a southern region rich with minerals and fertile farmland.

Poland struggles with air and water pollution. In the late 1990s, Poland ranked twelfth in the world in industrial carbon dioxide emissions. Water pollution in the Baltic Sea off the coast of Poland is ten times higher than in the ocean at large. Environmental protection was a high priority for the government at the beginning of the twenty-first century.

The Roman Catholic rituals of feasting and fasting, introduced to Poland around A.D. 900, have had a strong influence on Polish food traditions. During the fasts no meat is eaten, so many meatless and fish dishes have become a part of Polish cookery.

Located between two powerful neighbors, Germany and Russia, Poland was forced to form many political alliances throughout its history. These influenced its food customs. For example, the marriage of King Zygmunt to the Italian princess Bona Sforza in the sixteenth century brought Italian food customs to Poland, including the introduction of salad. Since that time, the people of Poland, known as Poles, have called salad greens wloszcycna (“Italian things”). Other foreign dishes that were brought to Poland included goulash (stew) from Hungary, pastry from France, and borscht (beet soup) from Ukraine. However, all these foreign dishes have become part of a unique Polish cooking style.

3.FOODS OF THE POLES

The cereal grains, grown on Poland’s rich agricultural land, are among the country’s most important dietary staples. These include wheat, rye, buckwheat, and barley. They find their way into dark bread, noodles, dumplings, and other everyday foods.

Other important agricultural products include potatoes, beets, cabbage, carrots, mushrooms, and cucumbers. Boiled potatoes are the most commonly eaten side dish with meat, poultry, or fish. Cucumbers, seasoned with the herb, dill, are the raw ingredients of dill pickles, for which the Poles are known throughout the world. Cucumbers are also eaten in a salad with sour cream, another staple of the Polish diet. Vegetables are usually eaten boiled.

Meat is an important part of the Polish diet. Pork is the most popular meat, and the most commonly eaten meat dish is a fried, breaded pork cutlet served with thick sauce. Beef, ham, and sausage are also eaten regularly. The meat stew called bigos is often called the national dish of Poland. Other famous Polish dishes are golabki (cabbage leaves stuffed with ground meat and rice) and golonka (fresh ham served with horse-radish). Poles also like to eat smoked and pickled fish, especially herring.

Most Polish meals start with one of Poland’s many soups. These range from clear broth to thick soup so hearty it could be a meal in itself. The best known is the beet soup called borscht.

Popular beverages include coffee, tea, milk, buttermilk, and fruit syrup and water. However, vodka distilled from rye is known as the national drink. 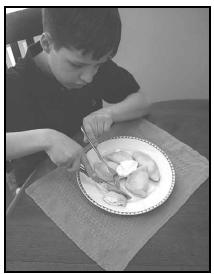 A plateful of cheese pierogi, topped with a dollop of sour cream, makes a filling lunch or dinner.

Noodles with honey and poppy seeds 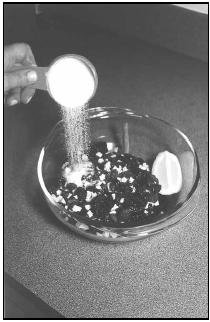 This fragrant mixture of dried fruits and spices is served at the end of the festive Christmas Eve dinner.

4.FOOD FOR RELIGIOUS AND HOLIDAY CELEBRATIONS

Poland is a heavily Roman Catholic country, and many Poles observe Catholic fast days by not eating meat. Traditionally, many meat substitutes have been made from mushrooms.

The two most important holidays are Christmas and Easter. The traditional Christmas Eve dinner consists of twelve or thirteen courses. There is one for each of the twelve apostles (Jesus of Nazareth’s followers) in the New Testament of the Bible. Sometimes there is a thirteenth course for Jesus. No meat is eaten at this meal. The main dish is carp or pike (two types of fish). Carp is served with a sweat-and-sour sauce or a spicy horseradish sauce. Other traditional dishes include mushroom soup, sauerkraut, pierogi (Polish dumplings), noodles with honey and poppy seeds, and poppy-seed rolls. Cookies and cakes are also served, and some cookies are used to decorate the Christmas tree.

Easter is the second most important religious feast of the year. The fast of Lent is broken with Easter breakfast, and feasting continues through the day. Traditionally, a roasted lamb was served for Easter. In recent years, a lamb made of sugar or butter has replaced the real lamb. Meats served for Easter in modern Poland include roast turkey, ham, sausage, veal, or a roast pig. Painted hard-boiled Easter eggs are part of the celebration, and everyone eats part of an egg. Easter sweets include babka (rich pound cake) , cheesecake, and mazurek (a Polish shortbread).

Dried Fruit Compote is usually served at the end of Christmas Eve dinner.

Poles like to eat hearty, filling meals, and they eat four meals a day. Sniadanie (shnah DAHN-yeh, breakfast) is eaten between 6 and 8 A.M. It includes many of the same breakfast foods eaten in the United States, such as scrambled or soft-boiled eggs, rolls with butter, bagels, and, in winter, hot cereal. However, cheese and ham or other meats are also served. Coffee, cocoa, or tea with milk is served, or even hot milk by itself. Between 11 A.M. and 1 P.M. , a light meal, or “second breakfast,” is eaten. It is similar to lunch in the United States and may consist of a sandwich, soup, fried eggs, or a plate of cold meats. Children usually take sandwiches to school for their midday meal. The main meal of the day is obiad (oh-BEE-ahd, dinner), served in the late afternoon (usually between 4 and 6 P.M. ). There is usually at least one meat dish, boiled vegetables or salad, some form of potatoes, soup, and a grain dish or dumplings ( pierogi ). The Poles like both their meat and vegetables cooked until they are very tender. A sweet dessert, usually cake, is served at the end, with a beverage.

The last meal of the day is a light wieczerza (wee-CHAIR-zah, supper), served at about 8 or 9 P.M. in the evening. It includes a hot or cold main dish, pickled vegetables, a dessert, and hot tea with lemon or hot cocoa.

When they have to “eat on the run,” Poles can pick up an inexpensive meal or snack at small places called milk bars ( bar mleczny ). Western-style fast foods, including pizza and hamburgers, are also available. A popular Polish “fast food” is flaki, a dish made from tripe (cow stomach). It is either boiled or fried with carrots or onions. 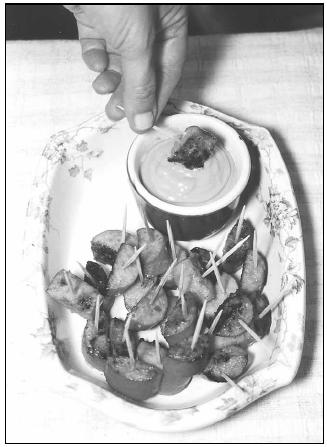 Kielbasa, cut into bite-sized pieces, may be combined with cabbage for a hearty dinner, or may be enjoyed alone with mustard as a snack.

More than half of Poland’s land is used for farming. Polish farms don’t produce as large a crop as farms in other parts of the world, because of poor soil and lack of rainfall. In the late 1990s, Polish farmers began to use more mechanical farming aids, such as tractors, which helped to improve the size of the crops. Polish farmers grow fruits and vegetables. Since the 1950s, Poland has been forced to import wheat, since it can’t produce enough on its own.