the cuisines and foods of Saudi Arabia 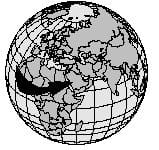 Saudi Arabia, the third-largest country in Asia, constitutes about four-fifths of the Arabian Peninsula. The other countries that share the peninsula—Yemen, Oman, United Arab Emirates, Qatar, Bahrain, and Kuwait—are all much smaller in area. A narrow plain runs along the Red Sea coast. The Hijaz Mountains (Al Hijaz) rise sharply from the sea. At least one-third of the total area is sandy desert. There are no lakes, and except for artesian wells (wells where water flows to the surface naturally) in the eastern oases, there are no rivers or streams where water flows.

The people of Saudi Arabia are descended from tribes of nomadic sheep and goat herders and maintain many of the traditions of their past. Traditional foods like dates, fatir (flat bread), arikah (bread from the southwestern part of the country), and hawayij (a spice blend) are still eaten by Saudis today, although most Saudis have settled in towns and cities and no longer follow the nomadic lifestyle. Saudi Arabia is also home to Mecca, the origin and spiritual center of Islam. The culture, as well as the laws of Saudi Arabia, is founded on Islamic principles, including the dietary restrictions against eating pork or drinking alcohol.

In the 1930s, oil was discovered on the Arabian Peninsula. Income from oil has allowed Saudi Arabia to become modernized and to begin to develop stronger industries in other areas such as agriculture. Saudi Arabia now produces all of its own dairy products and most of its own vegetables. Many foreign workers are needed to maintain the new industries, and foreign foods as well as fast food chains are now available in Saudi Arabia. However, it is mostly the foreigners who eat those foods; most Saudis prefer traditional fare. 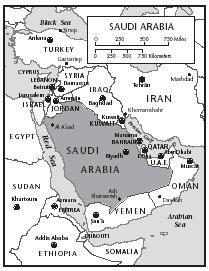 Authentic fatir is made with toasted barley flour, not widely available in the United States. Flour tortillas baked in a warm oven over a metal mixing bowl for 3 to 4 minutes will simulate the shape of fatir.

This spice blend keeps for a long time in a well-sealed container.

Note: Ground spices may be substituted for the spices listed.

Store in a glass or plastic container with a lid. (An empty spice jar works well.) 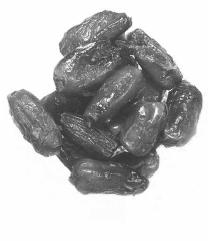 Dates are used in many recipes throughout the Middle East and are enjoyed alone as a snack.
EPD Photos

3. FOODS OF THE SAUDIS

The people of Saudi Arabia are very traditional and eat the same foods they have eaten for centuries. The average meal of the Bedouin nomads who remain in Saudi Arabia is much simpler than that of the urban Saudis who make up the majority of Saudi Arabia’s population today. However, the basic ingredients are the same: fava beans, wheat, rice, yogurt, dates, and chicken are staple foods for all Saudis. Saudi Arabia has over 18 million date palms that produce 600 million pounds of dates each year.

Saudis rank as the highest consumers of broiler chickens in the world, eating an average of 88.2 pounds of chicken per person per year. Saudis are strict Muslims and, following Islamic law, do not eat pork or drink alcohol. Lamb is traditionally served to honored guests and at holiday feasts. According to Islamic law, animals must be butchered in a particular way and blessed before they can be eaten, so Saudi Arabia is the world’s largest importer of live sheep.

Camel (or sheep or goat) milk has long been the staple of the Bedouin diet, and dairy products are still favorites with all Saudis. Yogurt is eaten alone, used in sauces, and made into a drink called a lassi. Flat breads— fatir, a flat bread cooked on a curved metal pan over a fire, and kimaje, similar to pita—are the other mainstay of the nomadic diet that are eaten by all Saudis. These breads are used at every meal, in place of a fork or spoon, to scoop up other foods. 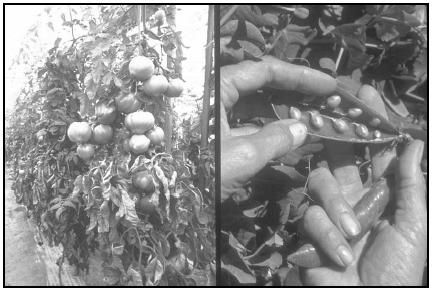 This bread is traditionally served warm from the oven and is used to scoop up other foods. 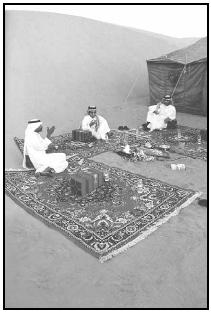 Saudis arrange ornate rugs around a central fire when outdoors, as these men are, or around dishes of food being served when indoors. Diners sit on the rugs and share food and conversation.
EPD Photos/Brown W. Cannon III

Saudi Arabia is a Muslim nation. The national holidays are Islamic holidays, including Ramadan (a month of fasting from sunup to sundown), Eid al-Fitr (the feast at the end of Ramadan), and Eid al-Adha (the Feast of Sacrifice). Two of the Five Pillars (requirements) of Islam are to make a pilgrimage to Mecca, and to give aid to the poor. Eid al-Adha, which occurs at the end of the month of pilgrimage, reenacts the story of God giving Abraham a ram to sacrifice instead of his son Isaac. It also fulfills the requirement to give to the poor, by having a lamb ritually slaughtered and donating the meat to those in need.

Most Saudi holiday meals include thick soups, stuffed vegetables, bean salads or tabbouleh (a salad made with bulgur wheat), hummus, rice, and the flat bread that is eaten with all meals. Dates, raisins, and nuts are served as appetizers or snacks, and sweet desserts finish off the meal. Ornate rugs are laid out on the floor and dishes of food placed on them. The feasters sit cross-legged on the floor around the rugs and eat with their fingers or bread, sharing from the same dishes. Hands are ritually washed, in accordance with Islamic law, before and after eating.

Note: To toast pine nuts and almonds, heat a small amount of olive oil in a skillet. Add nuts and cook, shaking the pan frequently, until nuts are golden in color.

Saudi customs for mealtimes and table etiquette come from both their nomadic tribal heritage as well as their Islamic tradition. Based on nomadic habits of herding animals throughout daylight hours, daytime meals are small, with a large meal in the evening.

The month-long celebration of Ramadan builds on this tradition, requiring a complete fast from sunup until sundown, with a large meal after sunset. Saudi meals are eaten sitting cross-legged on the floor or on pillows around a rug or low table (as though in a tent), sharing food out of the same dishes. Food is usually eaten with the fingers or a piece of bread. Following Islamic law, only the right hand is used for eating, as the left hand is considered “unclean” because it is used for personal hygiene. Ritual hand washing is completed before and after eating.

Dates and sweet tea are favorite snacks for Saudis, and buttermilk, cola, and a yogurt drink known as lassi are popular beverages. Coffee has been a central part of Saudi life for centuries, with an intricate ceremony to prepare and serve it. Preparing the coffee involves four different pots in which the coffee grounds, water, and spices are combined and brewed before being served in small cups. It is considered very rude to refuse a cup of coffee offered by the host, and it is most polite to accept odd numbers of cups (one, three, five, etc.). Saudi men spend a great deal of time in coffeehouses, drinking coffee or tea and talking.

The Saudis in general receive adequate nutrition. The country’s agricultural practices have been modernized and the government has made significant investments in irrigation. Saudi farmers grow and raise almost enough crops and livestock to meet the needs of the population.

According to the World Bank, less than 4 percent of the population experiences inadquate nutrition, and nearly 90 percent 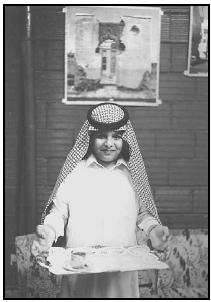 A young man presents coffee on a tray to a guest. The Saudis take pride in their hospitality, and it is considered rude to refuse a host’s offer of refreshments.
EPD Photos/Brown W. Cannon III