the cuisines and foods of South Africa 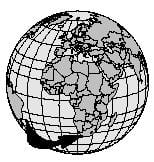 South Africa is a large country at the southern tip of the African continent. It is slightly less that twice the size of Texas. The country has large areas of plateaus, with some areas of higher elevations in the eastern Drakensberg Mountains, near the border with Lesotho. Over 80 percent of South Africa’s land could be farmed, but only about 12 percent is devoted to agriculture. The main crop is corn (called “mealies” in South Africa).

Wheat can only be grown in winter, when the climate is like the Northern Hemisphere’s summer. “Kaffir corn,” which is really sorghum (a grass similar to Indian corn), is another important crop. South African farmers also raise livestock, but their herds do not produce enough meat to feed the population. Meat is imported in the form of live animals from neighboring Namibia and Botswana.

Early South Africans were mostly hunter-gatherers. They depended on foods such as tortoises, crayfish, coconuts, and squash to survive. Biltong , meat that is dried, salted, and spiced (similar to jerky), and beskuits (dried sweetened biscuits, like zwiebeck or rusks) were popular food among the original pioneers and are both still enjoyed by twenty-first century South Africans.

Dried fruits, eaten whole or ground into a paste, are also popular treats. The practice of modern agriculture was introduced by the Bantu, natives of northern Africa. They taught inhabitants to grow vegetables such as corn (“mealies”), squash, and sweet potatoes. Modern Zulu people, most of whom live in northeastern South Africa, enjoy a soft porridge made from mealie-meal (cornmeal), and dishes combining meat and vegetables such as dried corn and yams. 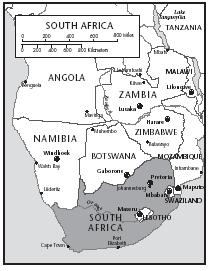 Slaves from the east, mostly from Malaysia, helped work as farmers or fishermen. They brought with them various spices that added flavor to commonly bland Dutch and English stews and dishes.

Early settlers simmered potjiekos (stew) for hours in a three-legged iron pot over a very small open fire. Ingredients would be added to the pot of potjiekos as they became available, such as animals caught by hunters or trappers and vegetables or wild plants harvested from the open fields.

3. FOODS OF THE SOUTH AFRICANS

Seafood, a staple food in South African diets, is plentiful along the country’s Atlantic and Indian Ocean coastlines. Hake is the most common fish, caught in the Atlantic Ocean waters. It is sold as “fish and chips” (pieces of deep-fried fish with French fries) 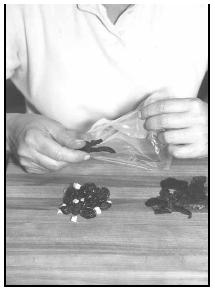 South Africa’s mild climate produces a variety of fruits and vegetables. Potatoes, cabbage, corn (“mealies”), sunflower, peppers, and green beans are commonly grown. The abundance of rain in the northern tip of the country allows tropical fruits to grow, including bananas, pineapples, and mangoes. Such fruits make delicious desserts.

Dishes of British origin are seasoned and flavorful in South Africa. Spices were added to popular meals, such as the meat pie. The Boer (Dutch) Chicken Pie is a crusted chicken potpie with plenty of seasonings, topped with eggs and ham. Bobotie , a beef or lamb potpie, contains raisins, apples, almonds, and curry powder, a savory seasoning.

Sausages (made of beef or pork) and sosaties , seasoned lamb on a skewer, are commonly eaten at meals. Sosaties are most frequently served at a barbecue, or braai , party and served with sauce and biscuits. South Africans make sosaties in different ways, with a variety of seasonings to make the meal more flavorful.

Other meat favorites are ostrich and chicken. Frikkadels (“little hamburgers” usually seasoned with nutmeg) are sometimes served wrapped in cabbage leaves. Bredies , meat and vegetable stews of all kinds, are usually named for the primary vegetable ingredient (such as carrot bredie or tomato bredie). Wine, water, mechow (a fermented beer-like drink made from cornmeal), and tea are often served with meals. Rice pudding, melktert (milk custard tart), and cookies remain popular desserts.

More South Africans practice Christianity than any other religion. Like other Christians around the world, South African Christians celebrate Christmas Day on December 25 and Good Friday and Easter in either March or April. Such occasions are normally celebrated with family and close friends. 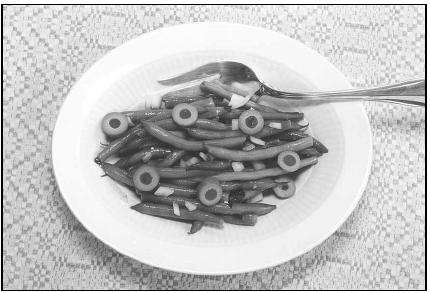 A typical holiday menu may include rock lobster tail or seasoned lamb or pork accompanied by cabbage. Serving appetizers depends on the size of the dinner. People want to save room for dinner, dessert, and after-dinner drinks.

Mealie bread (corn-bread) is a South African favorite and is often served before or during the meal. Wine, beer, tea, or water may be refreshing to adults, while children may enjoy soft drinks or other non-alcoholic beverages.

Rooibos tea (pronounced roy boy), a strong, caffeine-free herbal tea made from a plant that is native to South Africa, is served without milk, sugar, or lemon. Rice pudding is a common dessert. No matter what meal is chosen, it is certain to be full of flavor.

A much smaller number of South Africans are either Muslim or Hindu. Muslims celebrate the Islamic holiday of Ramadan, a movable month-long holiday. During Ramadan, Muslims fast (avoid eating and drinking) from sunrise to sunset to worship and practice self-control.

After sunset, people gather together to enjoy dinner, called iftar . Dinner may include rice, dates, and a variety of spiced dishes. Hindus celebrate Diwali , or Festival of Lights. On this important day, the Hindus eat a small portion of lamb, chicken, or fish with beans or lentils. Their festive dishes often contain up to fifteen different spices and are accompanied by bread.

South Africans eat three meals per day. For breakfast, most eat some kind of hot cooked cereal, such as putupap (cornmeal porridge, similar to grits), served with milk and sugar. Putupap and mealie bread (corn bread) are frequently also served as part of a main meal and lunch or dinner, too. Other breakfast foods might be beskuit, a crusty, dried sweet bread (similar to rusks). Tea and coffee are popular morning beverages.

South Africans are known for their hospitality and love to cook for visitors. During a hearty meal featuring a main course such as bobotie, seafood, or mutton stew, accompanied by vegetables and rice, it not uncommon for a host to offer guests a variety of drinks, such as wine, homemade beer, or tea. Fruits, puddings, and cakes round off a great meal.

Unlike in the United States, foods are seldom packaged for convenience. Bread is rarely pre-sliced and preservatives are not widely used. National laws determine store hours, particularly for meat sellers, who often open as early as 5:30 A.M. and close as early as 1 P.M. For those who can afford it, a servant may be hired to help prepare meals and travel to the stores at early hours.

Lunch may be a simple meal, such as a sandwich or soup. Students returning from school may enjoy a fruit drink, similar to a smoothie, as a between-meal snack. Fresh fruits such as pineapple are often the basis for these refreshing beverages.

Dinner may be simple or formal. South Africans may serve dinner on their finest dishes and silverware, placed on a white tablecloth with a centerpiece of flowers or fruit. Salt and peppershakers are almost always available, along with various condiments. In addition, several beverage options are usually on the table. Tea is enormously popular in South Africa, particularly in the early morning. Guests may be awakened by their hostesses as early as 5 or 6 A.M. to enjoy morning tea.

South Africans also like to eat out, whether it is a back porch barbecue ( braai ), at a restaurant, or at a sporting event. Biltong , similar to strips of jerky, is as popular a snack as popcorn is in a movie theater in the United States.

Note: Although not authentic, instant polenta may be prepared as an approximate substitute.

From 1948 until 1994, South African society was strictly divided according to racial groups in a structure called apartheid, or racial separation. While the government officially referred to this structure as “separate development,” there were, in reality, few resources devoted to development of the black portions of the country. In 1994, the policy of apartheid ended and a multiracial government was elected. Since then, the economy has been adjusting to the new structure of society.

Some areas of the economy, such as tourism, suffered because people were concerned that the changes might lead to instability. At the beginning of the twenty-first century, the white minority population enjoyed a high standard of living, but the 85 percent majority black population still lived with low health and economic standards of living.