the cuisines and foods of Spain

Spanish cuisine is heavily influenced by historical processes that shaped local culture and society in some of Europe’s Iberian Peninsula territories. 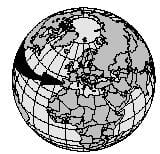 With Portugal, Spain makes up the Iberian Peninsula, or Iberia. Iberia is separated from the rest of Europe by the Pyrenees Mountains, which rise to a height of 11,168 feet (3,404 meters). The peninsula is bordered by the waters of the Mediterranean Sea on the east, the Strait of Gibraltar on the south, the Atlantic Ocean on the west, and the Bay of Biscay on the northwest. Spain’s miles of coastline (more than any other European country) provide it with bountiful seafood and fish. Spain is also a close neighbor to Africa. Morocco lies only a short distance—eight miles (thirteen kilometers)—across the Strait of Gibraltar from the southern tip of Spain.

Rich soils in interior valleys yield a variety of cultivated vegetables, while the country’s arid (dry) climate provides excellent growing conditions for grapes and olives. The high plateaus and mountainsides of the interior are grazing grounds for sheep and cattle.

As a gateway between Europe and Africa, and the Mediterranean Sea and the Atlantic Ocean, Spain has been much fought over throughout history. The Greeks settled its coastal areas as early as the eighth century B.C. , while Celts occupied interior regions. By the second century B.C. , Spain was under Roman domination. In the early eighth century A.D. , the Moors (Arabs from northern Africa) crossed Gibraltar and entered Spain, occupying it for the next 700 years before Christian kingdoms drove them out.

This long history of invasion is still evident in Spain’s cuisine. Olives, olive oil, and wine tie it closely to Greek and Roman (Italian) culture. Meat and fish pies show the Celtic heritage. The Moorish influence 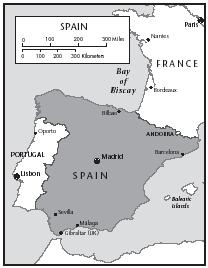 is seen in the use of honey, almonds, citrus fruits, and spices, such as cumin and saffron (a yellow spice).

A leader in exploration and colonization, powerful Spain was among the first nations in Europe to discover the treasures of the New World. Beginning in the late 1400s, explorers returned from voyages across the Atlantic Ocean carrying such exotic new foods as tomatoes, potatoes, sweet potatoes, beans, corn, peppers, chocolate, and vanilla—all native to the Americas. These foods were slowly joined with the Spanish diet.

3. FOODS OF THE SPANIARDS

Spain’s culinary traditions rely on an abundance of locally grown vegetables and fruits as well as meats and poultry. Jamón serrano , a cured ham, and chorizo , a seasoned sausage, are popular. Seafood and fish are popular in coastal areas. Other popular foods are cheeses, eggs, beans, rice, nuts (especially almonds), and bread (a crusty white bread, baked fresh daily, is common). Olive oil and garlic are common ingredients. Spain is also known for its wines, including the rioja , made in the northern province; sherry, a fortified wine that may be dry or sweet; and sangria, wine mixed with fruit and soda water.

The best-known Spanish dish, a stew called paella (pie-AY-ah), originated in Valencia, an eastern province on the Mediterranean Sea. Rice, a main ingredient, is grown in Valencia’s tidal flatlands. Though there are numerous variations, paella is usually made of a variety of shellfish (such as shrimp, clams, crab, and lobster), chorizo (sausage), vegetables (tomatoes, peas, and asparagus), chicken and/or rabbit, and long-grained rice. Broth, onion, garlic, wine, pimiento (sweet red pepper), and saffron add flavor to the stew.

Every region has its own distinct cuisine and specialties. Gazpacho, a cold tomato soup, comes from Andalucía in southern Spain. Traditionally, a special bowl called a dornillo, was used to pound the ingredients by hand, but modern Spanish cooks use a blender. Andalusians also enjoy freidurías (fish, such as sole or anchovies, fried in batter). Cataluña (Catalonia), in northeastern Spain, is known for its inventive dishes combining seafood, meat, poultry, and local fruits.

In the northern Basque country (país Vasco), fish is important to the diet, with cod, eel, and squid featured prominently. The signature dish of Asturias, in northwestern Spain, is fabada, a bean stew. In the interior regions, such as Castilla, meats play a starring role. Tortilla española, a potato omelet, is served throughout the country. It can be prepared quickly and makes a hearty but simple dinner. Spain’s best-known dessert is flan, a rich custard. 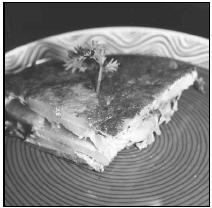 A wedge of Tortilla Española, ready to be served.
EPD Photos

Tortilla Española in preparation. Potatoes and onions are cooked until tender (left); the potato-onion mixture is combined with beaten eggs and returned to the skillet (center); the half-cooked tortilla is slid back into the frying pan, uncooked side down.
EPD Photos

To bring good luck in the year ahead, Spaniards traditionally eat twelve grapes, one with each chime of the clock at midnight on New Year’s Eve. On February 3, St. Blaise’s Day ( Día de San Blas ) is celebrated by baking small loaves of bread, called panecillos del santo, which are blessed at Mass in the Roman Catholic church. According to tradition, all the children in the household are to eat a bit of this bread to protect them from choking in the year ahead.

The Christmas season officially begins on December 24, called Nochebuena (the “good night”). It is marked by a special family dinner. A typical menu includes onion and almond soup; baked fish (cod or porgy); roasted meat (such as turkey); and red cabbage and apples (or another vegetable dish). Dessert may include flan and a variety of fruits, cheeses, and sweets—especially turrón (almond and honey candies) and mazapanes (or marzipan, a glazed concoction of almonds and sugar) which are sometimes shaped like coiled snakes to signify the end of one year and the beginning of the next.

After this festive dinner, it is tradition to attend church. Christmas ends with the festivities of Three Kings Day, or Día de los Tres Reyes.

On January 5, parades are held to welcome the arrival of Baltasar, Gaspar, and Melchior who arrive that night to bring gifts to children. (Baltasar, Gaspar, and Melchior were the “Three Wise Men” who, according to the Christmas story, brought gifts to the baby Jesus in Bethlehem.) The next day, January 6, the traditional Roscón de Reyes (a sweet bread) is baked and enjoyed. A small surprise, such as a coin, is baked into the cake and the person who finds it in his piece is believed to enjoy good luck in the year ahead.

Daily meals in Spain begin with a light breakfast ( desayuno ) at about 8 a.m. Next comes a three-course lunch (comida ), the main meal of the day. Families gather to eat it in the mid-afternoon (about 2 p.m.). At about 10 p.m. supper ( cena ), a lighter meal, is served. In addition, bollos (small rolls) may be eaten in the late morning; the merienda , a snack of tea or Chocolate a la España (Spanish-style hot chocolate) and pastries may be enjoyed in the early evening (about 5 p.m.); and tapas , traditional Spanish appetizers, are consumed around 8 p.m., before supper.

Though American fast-food restaurants have opened in Spain’s cities, traditional “food-to-go” includes churros , sugary fritters sold at street stands; and bocadillos , sandwiches typically made of a cured ham ( jamón serrano) or other meat and cheese. Bocadillos may be found in the school-child’s lunch box, as might a wedge of a cold Tortilla Española (Spanish omelet), fresh fruit, and cheese.

The tradition of tapas, now enjoyed in many U.S. restaurants, originated with the practice of bartenders covering a glass of wine or beer with a small plate of free appetizers ( tapa means “cover”). The great variety of tapas enjoyed today are testimony to their popularity. They may be as simple as a slice of fresh bread with tuna, as extravagant as caracoles a la madrileña (snails, Madrid style), or as comforting as an empanadilla , a mini meat pie. Invariably they are accompanied by lively conversation, a hallmark of Spanish daily life. 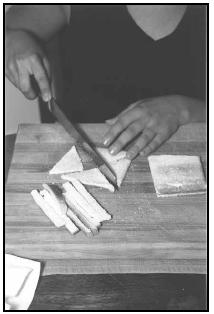 To use toast triangles instead of tartlet shells when preparing Tartaletas de Champiñón, trim crusts from slices of white bread before toasting. Cut each piece of toast crosswise, from corner to corner, to make four triangles.
EPD Photos

The Spanish economy is strong. Spain was one of the countries that joined the European Monetary Union in 1999, and the country adopted the European currency, the euro. Nearly all Spanish children receive adequate nutrition.

In the late 1990s, concerns about mad cow disease, which was affecting cattle in the United Kingdom, caused all Europeans to be more cautious about eating beef. The market for Spanish sheep and hogs strengthened slightly, as Spanish cooks decided to cook more lamb, mutton, and pork.

Casas, Penelope. The Foods and Wines of Spain. New York: Alfred A. Knopf, 1982. (A complete cookbook of Spain’s traditional foods. Most recipes are quite involved, but many are preceded by the author’s notes on the dish and its origins.)