the cuisines and foods of Sweden 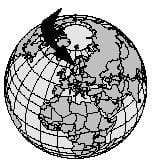 Sweden is the fourth-largest country in Europe. It is the largest Scandinavian country (the other countries in Scandinavia are Denmark, Finland, and Norway). About 15 percent of Sweden’s total area lies north of the Arctic Circle. Because of the effect of warm ocean winds, Sweden has higher temperatures than its northerly latitude would suggest.

Sweden’s relatively slow population growth and strong conservation policies have preserved the country’s extensive forests. However, air and water pollution are both serious problems. Airborne sulfur pollutants have made more than 16,000 lakes so acidic that fish can no longer breed in them.

Sweden’s climate and location are largely responsible for the development of its cuisine. Early inhabitants stocked food supplies to prepare for the start of the country’s long, cold winters by preserving meat, fish, fruits, and vegetables.

The Vikings, who inhabited all of Scandinavia more than one thousand years ago, were some of the first to develop a method for preserving foods. In preparation for long voyages, foods were salted, dehydrated, and cured. Though modern-day technology (such as the refrigerator and freezer) has eliminated the need for such preserving methods, Swedes continue to salt, dehydrate, and cure many of their foods, particularly fish.

During the Viking era, a.d. 800 to 1050, these ruthless crusaders embarked on raids all across Europe, invading lands possibly as far south as the Mediterranean Sea. The British Isles and France were in close proximity to Scandinavia, and therefore endured continuous Viking invasions.

Over time, various foods such as tea from England, French sauces and soups, and honey cakes from Germany were brought back to Scandinavian territory and incorporated into the diet. Swedes still find soups a great way to use leftover food.

Historically, Swedish cuisine has not been as popular as other European fare. (Even modern-day restaurants in Sweden tend to serve more foreign dishes than their own.) It has, however, been influential. The Russian nation is said to have been established by Scandinavian traders and warriors (called Varangians), and Sweden may be responsible for introducing fruit soups, smoked meats, cream sauces, and herring to early Russians. 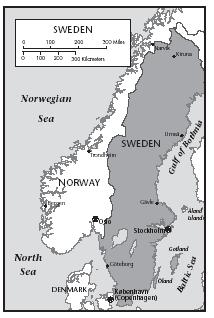 This tastes delicious with all fish, and vegetables such as boiled artichokes and broccoli, served as separate dishes.

3. FOODS OF THE SWEDES

Traditional Swedish home cooking (called husmanskost ) is simple in comparison with other European cuisines, but it is anything but ordinary. Husmanskost , once referring to tasteless porridge and other gruel, has come to represent savory stews, roasts, and various seafood.

The ultimate in husmanskost is the Swedish smörgåsbord (SMUR-gawssboord), which is a number of small hot and cold dishes served buffet-style. The literal meaning of the word is “bread and butter table.” The term has become world famous, representing a collection of various foods, presented all at once.

Surrounded by water on almost all sides, it is no surprise that Swedes love seafood, especially salmon, which is typically smoked, marinated, or cured with dill and salt. (No other country seems to surpass Sweden in the number of ways fish is prepared.) Herring, another popular catch, is prepared in just as many ways, and is often eaten alongside breads, cheese, and eggs for breakfast. Crayfish and eel are also enjoyed.

The method of pickling and preserving food is one way Swedish cuisine sets itself apart from other countries. Fresh, home-grown ingredients, rich and creamy sauces (a French trait), and seasonal fresh fruits, such as the country’s native lingonberries, also contribute to Sweden’s growing culinary reputation around the world. Aside from international differences, Swedish cuisine also has regional distinctions.

Pitepalt (pork-filled potato dumplings) are popular in the far north, pytt i panna (a fried dish made from diced potatoes and meat or ham, served with eggs) is favored in the southern region, while the east coast’s most important food is strömming , a small, silvery Baltic herring. In any of the three locations, no meal is complete without the accompaniment of Swedish rye bread.

Serves at least 10 as an appetizer. To reheat, add a little more cream if dry.

Lutheranism is Sweden’s state religion, with approximately ninety percent of Swedes belonging to the Church of Sweden. The Christian holiday of Christmas ( Jul ) is uniquely celebrated in Sweden. Lasting for an entire month, Christmas commences on December 13, Saint Lucia Day, named for Lucia of Sicily who was murdered for her Christian faith. (According to legend, Lucia brought food to Sweden during a famine, centuries after her death.)

The eldest daughter of each household, dressed in a white gown, a red sash, and a halo of brightly lit candles (modern-day halos feature battery-operated candles with light bulbs) adorning her head, plays the role of Lucia each year. Before dawn, she wakens her parents and serves them hot coffee and saffron buns.

The largest feast of the year takes place on Christmas Eve, when either a juicy ham, or lutfisk (sometimes spelled lutefisk, dried fish cured with a lye mixture) with creamy dipping sauce, is served as the main dish. Julgröt , porridge similar to rice pudding, is also traditionally served. A lucky almond, often hidden in one of the porridges, is believed to grant good fortune to the person who finds it.

The Swedes feast on traditional foods that are unique to the Easter season. Halibut or salmon are the typical entrées of choice on Good Friday, with the main meal on Easter Sunday being lamb and hard-boiled eggs, often decorated with food coloring and designs. Shrove Tuesday, the last day before Lent, is traditionally observed by eating semlor , a cream- and almond-filled bun floating in a bowl of warm milk.

The Feast of Valborg (also known as Walpurgis Night, April 30) and the summer solstice (Midsummer Day) are two of the most important secular holidays in Sweden. Both days celebrate the blessings of the sun. With every day that follows Walpurgis Night, the sun shines brighter and longer until the summer solstice arrives, when potatoes and fresh strawberries with whipped cream are commonly eaten. 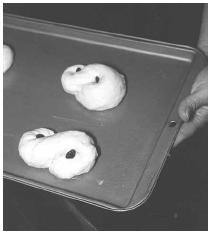 Form the dough for Lussekatter into S-shapes (like figure eights) and arrange the buns on a cookie sheet. Place a raisin in the center of each coil before baking.
EPD Photos

The Swedish smörgåsbord, perhaps Sweden’s best known culinary tradition, has specific customs to follow. Despite the meal’s pick-and-choose display, dishes should be eaten in a specific order. It is most appropriate to begin with herring and other fish, followed by cold meats, salads, and egg dishes. Next, hot dishes such as Swedish meatballs and cooked vegetables should be selected. Fruit salad or ostkaka (cheese-cake) may be eaten last.

A clean plate should be used with each new trip to the food table, but diners take only small portions, since wasted food is considered impolite. Scandinavian Airlines (SAS) began offering a small smörgåsbord at the gate before boarding the aircraft in the late 1990s, including sandwiches, yogurt, fruit, candy, and juice, and continued this tradition into the early twenty-first century.

Guests in a Swedish home should observe certain customs. In many households, wearing shoes beyond the front door is discouraged. Hosts will often walk around in socks (and will expect their guests to do the same). A small gift of appreciation given to the host is often appropriate, particularly if a visit is unexpected. In addition, guests should not be surprised to see pancakes for dinner, and coffee only offered black. When a popular alcoholic beverage, aquavit, is served, everyone at the table makes eye contact and takes the first sip simultaneously. 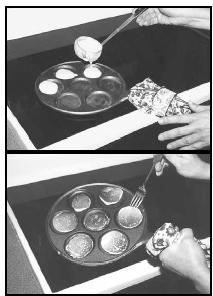 Plättar, Swedish pancakes, are traditionally baked in batches of seven on a special griddle with indentations for each small pancake.
EPD Photos

Authentic Swedish cuisine can be found in abundance throughout the country. Frukost (breakfast) is likely to be fairly large, serving coffee, juice, or tea, followed by bröd (breads), ost (cheese), ägg (eggs), and strömming (herring). Äta (lunch), normally served between noon and 1 P.M. , may be an open-face meat sandwich, kaldolmar (stuffed cabbage), or even a hamburger from one of the many local fast food restaurants.

Middag (dinner) immediately follows the end of the workday and consists of a variety of hot and cold dishes. Formerly, Swedish Catholics observed the tradition of not eating meat on Fridays, so the traditional Thursday night supper was hearty artsoppa (pea soup with ham) and plättar (pancakes). Although many have given up the meatless Friday tradition, artsoppa and plättar are still commonly served on Thursdays in Swedish homes and restaurants. 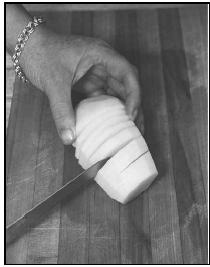 When baked, Hasselbackspotatis have a fan-like appearance. This is made by cutting thin slices about three-fourths of the way through the potato.
EPD Photos

Sweden has been called the model welfare state because every citizen is guaranteed medical care. In the 1990s, health care reform issues such as universal and equal access to medical services, as well as equal funding of health care were addressed. Sweden’s deep concern for equal human rights has helped lead to a healthier population.

Infant mortality has been sharply reduced in recent years, and remains one of the lowest rates in the world, much in part to the country’s excellent prenatal services for unborn children. In addition, children and teens receive free dental care until the age of 20. Most health problems are associated with the environment and lifestyle choices, such as smoking, excessive alcohol consumption, and overeating.