Turkish cuisine is the national cuisine of Turkey. Turkish cuisine (Turkish: Türk mutfağı) is largely the heritage of Ottoman cuisine, which can be described as a fusion and refinement of Central Asian, Middle Eastern, Eastern European and Balkan cuisines.

Turkish cuisine has in turn influenced those and other neighbouring cuisines, including those of Southeast Europe (Balkans), Central Europe, and Western Europe.The Ottomans fused various culinary traditions of their realm with influences from Levantine cuisines, along with traditional Turkic elements from Central Asia (such as yogurt and mantı), creating a vast array of specialities—many with strong regional associations. 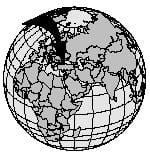 The Republic of Turkey consists of Asia Minor, the small area of eastern Turkey in Europe, and a few offshore islands in the Aegean Sea. It has a total area of 780,580 square kilometers (301,384 square miles), which is slightly larger than the state of Texas.

Turkey’s landscape is made up of low, rolling hills, the fertile river valleys that open to the Aegean Sea, the warm plains along the Mediterranean Sea, the narrow coastal region along the Black Sea, and the rugged mountain ranges that surround and intersect the high, desert-like Anatolian plateau.

Most of Turkey lies within an earthquake zone, and recurrent tremors are recorded.

Turkish cuisine is often regarded as one of the greatest in the world. Its culinary traditions have successfully survived over 1,300 years for several reasons, including its favorable location and Mediterranean climate. The country’s position between the Far East and the Mediterranean Sea helped the Turks gain complete control of major trade routes, and an ideal environment allowed plants and animals to flourish. Such advantages helped to develop and sustain a lasting and influential cuisine.

The Turkish people are descendents of nomadic tribes from Mongolia and western Asia who moved westward and became herdsmen around A.D. 600. Early influence from the Chinese and Persians included noodles and manti, cheese- or meat-stuffed dumplings (similar to the Italian ravioli), often covered in a yogurt sauce. 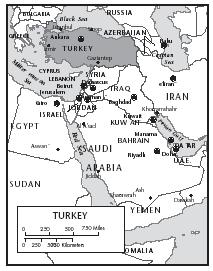 Manti has often been credited with first introducing dolma (stuffed foods) into the Turkish cuisine. The milk and various dairy products that became staple foods for the herdsmen were nearly unused by the Chinese. This difference helped the Turks to establish their own unique diet.

By A.D. 1000, the Turks were moving westward towards richer soil where they grew crops such as wheat and barley. Thin sheets of dough called yufka along with crushed grains were used to create sweet pastries. The Persians introduced rice, various nuts, and meat and fruit stews. In return, the Turks taught them how to cook bulgur wheat. As the Turks moved further westward into Anatolia (present-day Turkey) by 1200, they encountered chickpeas and figs, as well as Greek olive oil and an abundance of seafood.

A heavily influential Turkish cuisine was well established by the mid-1400s, the beginning of the (Turkish) Ottoman Empire’s six hundred-year reign. Yogurt salads, fish in olive oil, and stuffed and wrapped vegetables became Turkish staples. The empire, eventually spanning from Austria to northern Africa, used its land and water routes to import
exotic ingredients from all over the world. By the end of the 1500s, the Ottoman court housed over 1,400 live-in cooks and passed laws regulating the freshness of food. Since the fall of the empire in World War I (1914–1918) and the establishment of the Turkish Republic, foreign dishes such as French hollandaise sauce and Western fast food chains have made their way into the modern Turkish diet. 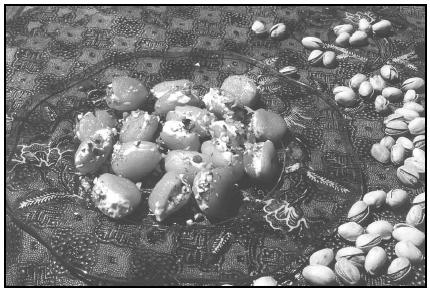 Kaymakli Kuru Kayisi (Cream-Stuffed Apricots) are made with apricots and pistachios, both of which are grown in Turkey. Each July there is an apricot festival in the central region of the country. 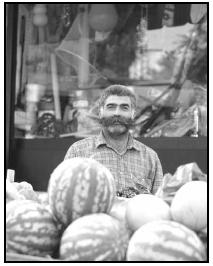 A colorful Turkish fruit vendor poses with his melons.

3. FOODS OF THE TURKS

Turkey is one of only seven countries in the world that can produce enough food to feed its people. This advantage gives the Turks access to fresh, locally grown ingredients that help to create some of the freshest dishes available. Contrary to common belief, Turkish cuisine is generally not spicy (though this varies throughout the seven regions). Seasonings and sauces, although frequently used, are simple and light and do not overpower the food’s natural taste. The most popular seasonings include dill, mint, parsley, cinnamon, garlic, cumin, and sumac (lemon-flavored red berries of the sumac tree). Yogurt is often used to complement both meat and vegetables dishes.

Rice, wheat, and vegetables are the foundation for Turkish cuisine.

Dolma , rice- and meat-stuffed vegetables, is frequently prepared throughout the country, most often with peppers, grape leaves, or tomatoes. The eggplant is the country’s most beloved vegetable, with zucchini a popular second and then beans, artichokes, cabbage, particularly when prepared in olive oil.

Pilav (pilaf), Turkish rice, is a common filling for dolma, as well as a common side dish. Various grains are used to make pide (flat bread),simit (sesame rings), and börek, a flaky, layered pastry filled with meat or cheese that is often eaten for breakfast.

Turkish meat usually means lamb, the main ingredient to the country’s most popular national dish, kebap (skewered grilled meat). The kebap resembles the familiar shish-kebab (onions, tomatoes, and peppers threaded on a skewer between pieces of meat and grilled) commonly eaten in the United States. Patties of seasoned minced meat called köfte are also popular. Most cattle are raised for their milk rather than for beef, and pork is prohibited in the Islamic religion (which nearly all Turks practice). Poultry and seafood, however, are second in popularity for meat-based meals.

Turkish sweets are most frequently eaten with coffee or as a snack, rather than an after-dinner dessert. The most common dessert is a bowl of seasonal fresh fruit, such as strawberries or apricots.

Baklava , widely known throughout the Western world, and other nutty pastries consisting of a sweet, flaky pastry made with honey and nuts;

Turkey celebrates three kinds of celebrations: national religious holidays, national secular (nonreligious) holidays, and local events and festivals. National Islamic holidays are important to the Turks since 99 percent are of the Islamic faith. To celebrate religious events, special dishes for family and friends are frequently prepared.

The first significant holiday of the Muslim year, Muharrem, takes place on the tenth day of the first lunar month. On this day in history, the grandson of the Prophet Mohammed was martyred and Noah and his family were able to leave the Ark after the floodwaters receded. A thick, sweet pudding called aure (also called Noah’s pudding) is traditionally prepared. Its ingredients (fruits, nuts, and grains) are supposedly the same ones that remained on the Ark after it was able to land.

The ninth month marks Ramazan (also known as Ramadan in Arabic countries), a month-long period of fasting in which Muslims refrain from food and drink during daylight hours.

Iftar is the meal eaten at the end of each day that breaks the daily fasting period.

Seker Bayrami, or translated as Candy Festival or Festival of Sugar, is a three-day national festival marking the end of Ramazan (also known as Eid al-Fitr in Arabic countries). On this day, elaborate desserts are prepared throughout the country and children visit door to door, asking for sweets.
On this special day, lokma (deep-fried batter in syrup) and locum (a popular Turkish candy, also known as Turkish Delight), are commonly distributed to neighborhood children in small tins. 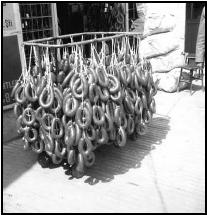 Rings of sucuk (spicy sausage) hang outside the butcher shop. Sucuk may be part of a dinner menu all year round.

Large feasts are also prepared for national secular holidays such as Independence day and Children’s Day, both on April 23, New Year’s Day on January 1, and Victory Day on August 30, marking independence from Greece in 1922. In addition, June’s Strawberry Festival in Bartin, July’s Apricot Festival in Malatya (Turkey’s apricot capital), and September’s Watermelon Festival in Diyarbakir draw large, local crowds who gather to honor these crops.

Sucuk (a spicy sausage) and pastirma (seasoned beef) are frequently prepared in the wintertime. Those in a
hurry often stop at a street cart or büfe (food stand) to grab a quick börek, a flaky, mince- or cheese-filled pastry or simit , a bread ring topped with sesame seeds. Muslims almost never consume pork products, making bacon absent from most menus.

Öyle yemek (oy-leh yem-eck), or lunch, is traditionally a heartier (and warmer) meal than breakfast.

Çorbalar, or soups, are served in a variety of ways, most commonly including lentils and various vegetables and meats. Larger lunch items include baked lamb or chicken served with peppers and eggplant, and fresh grilled fish with a side of lemon. Rice and bulgar pilaf dishes are also popular.

Lahmacun (lah-mah-jun), Turkish pizza, is popular among children. It consists of a thin crust and a layer of spicy ground lamb and tomato sauce. Tost, a grilled cheese sandwich, will please even the pickiest eater.

Akam yemek (ak-sham yem-eck), or dinner, is the largest meal of the day.

Mezeler (or mezze, singular), are “appetizers” served before the main meal. Ironically, most mezeler dishes are large enough to comprise an entire meal by themselves. Salads, soups, pilaf-stuffed fish, and köfte (fried minced meatballs) can leave diners quite full. A meat dish accompanied by starchy vegetables (such as potatoes) typically follows. Seasonal fresh fruits or milky puddings are most often enjoyed for dessert.

Turks, who are extremely hospitable and enjoy company, will welcome even unexpected guests with Turkish coffee. Meals are traditionally served on a large tray, placed on a low table or on the floor. The family and guests sit on cushions on the floor around the prepared foods. To avoid accidentally insulting the host, it is best to not refuse second or third helpings. It is also customary to remove one’s shoes at the door and offer a small gift to the host for their generosity.

About 2 percent of the population of Turkey are classified as undernourished by the World Bank. This means they do not receive adequate nutrition in their diet. Of children under the age of five, about 10 percent are underweight, and over one-fifth are stunted (short for their age).

Crops such as wheat, barley, sugar beets, grapes, maize (corn), sunflower seeds, hazelnuts, and oranges are grown on 90% of Turkey’s arable land. Crops are sensitive, however, to variations in rainfall and output is often unpredictable. Some years enough is produced for export, while at other times limited rainfall may only produce enough grain to feed the Turkish population. Despite such uncertainty, Turkey is one of the few countries in the world that produces enough food to feed its people. In addition, the adoption of modern machinery has allowed more land to be used for cultivation, helping to increase food production.

The Cooking of Greece and Turkey