Ukrainian cuisine is the collection of the various cooking traditions of the Ukrainian people accumulated over many years. The cuisine is heavily influenced by the rich dark soil from which its ingredients come from and often involves many components. 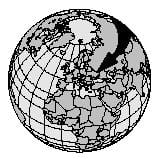 Ukraine is the second largest country in Europe. It is located between Poland and Russia. It is slightly smaller than the state of Texas. Much of the southeastern part of the country borders the Black Sea.

Most of Ukraine’s land is made up of fertile plains, or steppes, and plateaus. Mountains are found only in the west and extreme south in the Crimean Peninsula. This area’s climate is subtropical. Winters vary from cool along the Black Sea to cold farther inland. The temperature inland ranges from 66°F in July, to 21°F in January.

Northern and western Ukraine average 27 inches of rainfall a year. This temperate climate is ideal for growing crops. In fact, more than 57 percent of the Ukraine’s fertile soil is suitable for growing such crops as sugar beets, wheat, and potatoes.

The earliest known farmers in the Ukraine were the Trypillians (4500–2000 B.C.). The territory of the Ukraine had rich soil and a favorable climate perfect for cultivating crops. The Trypillians grew barley, millet, rye, and wheat. They also herded sheep, pigs, and cattle. Wheat was plentiful, and soon trading routes were established along Ukraine’s Black Sea coast to market the grain. The Ukraine territory became the crossing road connecting Arabia, Europe, and Asia.

Life depended on the activities of cultivating soil for crops. In pre-Christian times, holidays were celebrated during times of transition from one type of agricultural activity to another. These seasonal festivities were later incorporated into Christian holidays, such as Christmas and Easter. Over time, Ukraine fell under the power of many different countries, including Poland, Austria, and Russia. Despite being under Russian domination for almost 200 years, (gaining independence only in 1991), Ukrainians proudly kept their native traditions, customs, and cuisine.

Varnyky (dumplings) and holubtsi (stuffed cabbage) were originally imported from Turkey. Strudels, breaded meats, and desserts, such as cheesecake and tarts, were carried over from Austro-Hungarian times. Although Ukrainian dishes have origins from different countries, how they are prepared are uniquely Ukrainian.

3. FOODS OF THE UKRAINIANS

In the southern part of the Ukraine, plains called steppes have what is considered some of the most fertile soil in the world. Abundant rain and a mild climate made the Ukraine famous for its chornozem, or “black earth.” For centuries, the Ukraine was called “the breadbasket of Europe.” A visiting politician is greeted with the traditional Ukrainian
welcome of bread, representing hospitality, and salt, representing
friendship. The specially decorated loaf of bread and the salt are
offered by young women dressed in folk costume.

Ukrainian cuisine stems from peasant dishes based on the plentiful grains and staple vegetables grown in the country. Staple crops include sugar beets, potatoes, grapes, cabbages, and mushrooms. These are often key ingredients in soups and salads.

The most popular dish is borshch, a hearty soup made in a variety of ways, depending on the person who is cooking it. Mushroom, bean, and pea soups, and thick millet (a type of grain) chowders are also common. Other vegetable dishes include holubtsi (stuffed cabbage) and kartoplia solimkoi (“straw potatoes”).

Kotlety Po-Kyivskomy (Chicken Kiev), a chicken breast stuffed with a buttery filling, is a well-known dish outside Ukraine.

Grains, such as wheat, rye, barley, oats, corn, and buckwheat are cultivated and made into many different types of breads. Some examples are agnautka, a flat whole-grained loaf that is commonly eaten at meals; polianitsa, a large, round white bread; and ikrainka, a heavy, dark wheel-shaped loaf weighing about three pounds.

Nachynka is a baked cornmeal side dish served with meat.

In Ukrainian cuisine, when the dough isn’t baked, it is usually boiled, such as kasha (hot cereal), or fried in the form of dumplings or fritters. Freshly made dumplings called varenyky are a common Ukrainian staple.

Varenyky is dough stuffed with a variety of foods, such as potatoes, meats, cheeses, sauerkraut, and even fruit, such as blueberries or cherries, for dessert. Each region, restaurant, and family has its own recipe.

The foothills of the Carpathian Mountains, located in the western Ukraine, provide pastures for grazing beef and dairy cattle. Meats, such as kovbasa (sausage), poultry, and pork are important to the Ukrainian diet.

Pork is considered the national meat and pork fat is often used in cooking. It is used mostly for frying, but also can be eaten smoked or with salt. Common dairy products include milk, syrnyky (cottage cheese fritters), nalynsnyk (cheese-filled crepes), and riazhanka (fermented, baked milk).

Desserts are often baked into sweet breads, cakes, and cookies, and made with honey and fruits, such as plums, blueberries, and cherries.

Kutya (a type of wheat porridge)

Kapusta and peas (sauerkraut and peas)

Around 85 percent of Ukrainians are Christian. Therefore, the most important holiday in the Ukrainian church is Easter, followed by Christmas. Both holidays are celebrated according to the old-style Julian calendar, resulting in Christmas Day falling on January 7.

Christmas Eve is called the Sviaty Vechir (Holy Evening). To celebrate, a ritual meal is traditionally prepared with 12 mostly meatless dishes, which symbolize the 12 apostles who gathered at the Last Supper. In some homes, the supper table is scattered with some hay, in memory of baby Jesus in the manger, with an elaborate tablecloth.

Kolach is a traditional bread placed in the middle of the table. The meal usually begins with a small bowl of kutya, a mixture of cooked wheat, honey, poppy seeds, chopped nuts, and apples. This is followed by several fish dishes, mushrooms, holubtsi (stuffed cabbage), varenyky (dumplings), fruits, cakes, such as makiwnyk (poppy seed cake) and bread.

Borshch (a hearty soup) is usually included as well.

A Ukrainian Easter meal also has its ritual foods. In the morning, breakfast foods such as hard-boiled eggs, kovbasa  (sausage), baked cheese, breads, butter, and relishes, are placed into a basket and taken to church to be blessed. For Easter dinner, ham or roastpork, vegetable salads, cheesecake, tortes, and other pastries are eaten.

Besides Christmas and Easter, there are special breads for almost every important Ukrainian occasion. A bride and groom are blessed, and the dead remembered with kolach, a rich, intricate, braided bread, which symbolizes good fortune and eternity. For a typical wedding, seven bridesmaids grind flour from wheat grown in seven different fields to bake a korovai , a bread that symbolizes good luck. There are dozens of different ways of preparing and baking breads in the Ukraine.

In general, Ukrainians eat a light breakfast. It can be bread with butter served with coffee or tea, or pastries, such as a cream-filled blintz.

Kasha (cereal), steamed buckwheat, barley, or millet with milk may also be served. Their main meal is eaten around mid-afternoon and usually consists of soup, such as borshch and a dish with meat or poultry. The third meal of the day takes place around 6 or 7 p.m. It is usually a time when all family members get together. Eating at a restaurant is considered a luxury, and is usually not done very often.

Ukrainians eat with a fork in their left hand and a knife in their right hand. It is considered impolite to hold your hands under the table during dinner, or to put your elbows on the table. In order not to seem wasteful, Ukrainians may eat everything on their plates.

When they are visiting, Ukrainians may ask for second helpings to show appreciation for the food. Hosts often give guests a loaf of bread with salt on top, a tradition that dates back many centuries. Bread and salt were once considered necessary ingredients for health. The bread represents hospitality and the salt represents friendship.

About one-third of Ukraine’s land is used as pasture. Crops include sugar beets, potatoes, rye, and wine grapes. Before its independence, Ukraine was the most productive agricultural area in the Soviet Union. The land accounted for one-quarter of Soviet Union grain production, one-fifth of its meat and dairy, and more than one half of its sugar beet production.

Farmers raise cereal crops, such as wheat and corn. Since its independence, Ukraine has suffered financially, resulting in high food prices, a shortage of medical equipment, and modern facilities, especially in rural areas. Despite having economic difficulties, most Ukrainians receive adequate nutrition. In fact, less than one percent of children under five are malnourished, and only 6 percent of children are too short for their age. Since Ukraine joined the World Bank in 1992, many different programs have been implemented to help the country’s economy.

The Best of Ukrainian Cuisine