African American cuisine predominant in the southern United States is influenced by African styles of preparation and cooking. 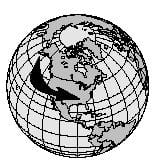 In the 1600s, African slaves were brought to the United States, along with their food and styles of cooking. They brought okra, sesame seeds, peanuts, black-eyed peas, and rice. Using these foods, they introduced new recipes to the existing American dishes.

The slaves were also given only a small portion of food each week, so they learned to make dishes with the foods they had, such as pork, cornmeal, and vegetables. Several of these dishes such as cornbread and grits, which are dried and boiled grains from corn, are still made as of the twenty-first century. African Americans also continue to use molasses as a sweetener in their dishes and in drinks, such as iced tea.

Beginning in the 1960s, interest in African American culture and heritage has grown. Many African Americans celebrate the cultural holiday Kwanzaa, don colorful dress reflecting their African heritage, and promote a unique
ethnic style of cooking, sometimes called “soul food.” During the 1960s and 1970s African American business people established “soul food” restaurants all over the country, where Americans of all ethnic origins could enjoy spicy barbecued meats and poultry, tasty greens, cornbread, and other home-style dishes.

Fish has always been an important staple in the African American diet. Fried catfish finds its way to the table often, served with such standard side dishes as greens, macaroni and cheese, and hush puppies. Hush puppies are derived from cornbread. It is said that hush puppies originated during the Civil War (1861–1865) when soldiers would throw fried cornbread to their dogs—to “hush the puppies.”

3. FOODS OF THE AFRICAN AMERICANS

Sweet potatoes and yams have been a large part of African Americans’ diet since African slaves brought them to the United States in the 1600s. Eating cornbread and grits (dried and boiled grains from corn) are also traditions, as well as sweetening dishes and drinks with molasses.

Other traditional African American foods and dishes include barbecued meat, sweet cornbread, fried chicken, and of course, desserts. A delicacy that has been a specialty of African Americans especially in the South is chitterlings (nicknamed “chitlins”) made from pig stomach and intestines that have been boiled and then deep-fried. 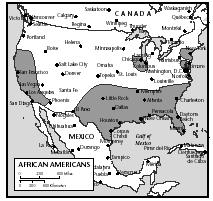 Hoppin’ John, a popular dish of rice and black-eyed peas, is traditionally eaten on New Year’s Day to bring good luck throughout the rest of the year. Red beans and rice is another traditional dish, especially in the southern states.

In the early 1900s, African Americans began to eat more dairy foods, such as eggs, milk, and butter. They also planted wheat and corn and grew different kinds of fruits and vegetables. With these ingredients, they began to prepare new dishes, most of which are still eaten.

In the southern U.S. regions, African cooking became a part of everyday meals. In New Orleans, Creole cooking developed from a mix of African, French, English, and Spanish cooking. Creole dishes such as jambalaya and gumbo contained chicken or seafood and were mixed with African foods such as rice, okra, or red peppers. These dishes are still popular.

Many African Americans hold annual family reunions, often on July 4, Independence Day. Relatives come from all over the United States, often meeting at a different family’s home each year. Large, extended families may even hold their reunions at a park where large picnic areas can accommodate the dozens of families in attendance.

Many African Americans celebrate Kwanzaa, a non-religious cultural holiday, from December 26 through January 1. During the seven days of Kwanzaa (which is derived from a Swahili word for “first fruits of the harvest”), African Americans celebrate their heritage and take pride in their African traditions. The Kwanzaa celebration was originated by Dr. Maulana Karenga, an activist and scholar, who has been involved in the development of Black Studies and African American art and student movements in the United States.

Each of the seven days of Kwanzaa represents a different principle, such as unity, purpose, and creativity. African American families celebrate this community–building holiday in their own way, with music, gettogethers, and feasting.

It is tradition for African Americans to eat a lot of food for breakfast. They may eat chicken, waffles, grits (dried and boiled grains from corn), ham, corn fritters, and bacon. Traditionally in the South, a Sunday breakfast includes fried apples, grits, and pork sausage. Salad, including leftover salad, may also be eaten as a breakfast dish.

Bologna is a popular luncheon meat for many African Americans. It is sometimes eaten at breakfast instead of bacon, and it is eaten in sandwiches for lunch.

Fried Apples are made from thinly sliced apples. To prepare an apple for slicing, first cut it in half, and then into quarters. Cut away the core and seeds, and then cut each quarter into thin slices.

Many African Americans prepare their food by frying it, barbecuing, and serving dishes with gravy and sauces. It is also common to bake cakes and pies from “scratch” (not from a commercial mix). These traditions have been passed down through many generations. Contemporary African Americans, like many Americans of all ethnicities, have become more health conscious, and have added more nutritional foods, such as fruits and vegetables, to their daily diets. Many African Americans have changed to healthier, lighter cooking styles for everyday cooking, reserving the traditional dishes (many of which are higher in fat) forholidays and special occasions.

Kwanzaa: An African-American Celebration of Culture and Cooking

A Kwanzaa Keepsake: celebrating the holiday with new traditions and feasts

Food and Our History

The African-American Kitchen: Cooking from our Heritage