The Great Lakes region of the United States includes the states of Wisconsin, Michigan, Indiana, Ohio, Illinois, Pennsylvania, and New York. The region enjoys four distinct seasons. Although the climate is considered temperate, temperatures in the summer can exceed 100°F and can drop to –10°F in the winter. There is rich farm land, and farmers’ markets offer abundant produce and fruit in the late summer and early fall across the region.

The region is also home to much manufacturing activity. Industrial pollution threatened the health of the Great Lakes, especially Lake Erie (the smallest Great Lake), until the 1960s, when a growing awareness of environmental concerns led to increased government regulation. Acid-rain, believed to be caused by air pollution generated by the coal-fired utility plants in the region, is also a concern. Increased acidity in the lakes creates unhealthy conditions for fish and other living things in the ecosystem of the region.

Woodlands American Indian tribes, including the Iroquois, Ashinabe (made up of Ojibwa, Potowatomi, and Ottawa tribes), Huron, Fox, and Sioux, among others initially populated the Great Lakes region of North America. These  American Indians gathered wild rice, berries, and maple sap, hunted deer and other game. They also fished and grew crops, such as corn, squash, and beans (known as the Three Sisters). In the early 1600s, French fur traders entered the region, and British settlers and American colonists began to move in during the 1700s. A series of conflicts including the 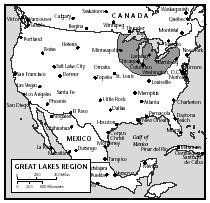 French and Indian War (1754–1763), the Revolutionary War (1775–1783), and the War of 1812 resulted in the British and French controlling the northern side of the Great Lakes (what is now Canada), and the United States controlling the south. The American Indians who remained were settled on reservations.

During the 1800s and 1900s, waves of immigration to the Great Lakes area came from Germany, Scandinavia, Holland, and Poland. Most were farmers who were attracted by the cheap, fertile land. The Homestead Act of 1862 offered free acreage to anyone who agreed to farm it for a certain number of years. The close-knit, family-based communities that developed retained their ethnic character for generations, cooking their traditional foods adapted to local ingredients. The population of the Great Lakes region continues to be largely German, Scandinavian, Dutch, and Polish. A number of miners originally from Cornwall, England, also migrated to the area.

The Detroit-Dearborn metropolitan area in Michigan now boasts the largest Arab American population in the United States—the city of Detroit being the prinicpal port of entry in the United States for Arab immigrants. The Arab Americans in Michigan-have contributed some foods of the Middle East, such as hummus, to the “menu” of the Great Lakes region. 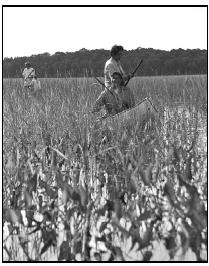 Wild rice is harvested in Wisconsin.

3. FOODS OF THE GREAT LAKES REGION

The Great Lakes region was originally populated by American Indians who taught later European settlers how to hunt the local game, fish, and gather wild rice and maple syrup, as well as how to grow and eat corn and native squashes and beans. The European immigrants, mostly from Germany, Scandinavia, Holland, Poland, and Cornwall, England, each shared their traditional dishes with the rest of America.

The Polish introduced kielbasa (a type of sausage) , pierogies (a type of stuffed pasta), Polish dill pickles, and babka
(an egg cake). Pancakes are a Dutch contribution, along with waffles, doughnuts, cookies, and coleslaw. Miners from Cornwall brought their Cornish pasties, and small meat pies that were easily carried for lunch. Later immigrants from Arab countries settled in Detroit, Michigan, and introduced America to foods like hummus (puréed chickpeas), felafel (deep-fried bean cakes), and tabbouleh (bulgur wheat salad).

Dairy is a major industry in the Great Lakes region, particularly Wisconsin, known as “America’s Dairyland.” Dairy farmers in Wisconsin milk about 2 million cows every day, and there is one cow for every two people in the state. Not surprisingly, milk, butter, and cheese are staples in the Great Lakes diet. Pigs are also common on farms in the Great Lakes region because they take up less space and are easier to raise than beef cattle. Pork, therefore, is another common ingredient in Great Lakes cooking, especially in the form of sausage.

A Great Lakes food that has become popular over all the United States is Buffalo chicken wings. There are three stories told as to how wings became famous, but perhaps the most believable is that in 1964 the Anchor Bar in
Buffalo, New York, received a shipment of wings by mistake. The owner, who had been asked to supply a “meaty” appetizer for a gathering at the bar, cooked up the wings in hot sauce and served them with the house dressing, which just happened to be bleu cheese.

Most people who live around the Great Lakes are Christian, with small minorities of Muslims and Jews in certain areas. German Christians broughtwith them many of the Christmas traditions Americans now take for granted, such as Christmas trees and Santa Claus (or Kris Kringle). They also introduced America to New Year’s Eve celebrations.

Another German cultural festival that has become popular in America is Oktober-fest. The first Oktoberfest took place in 1810 in Bavaria (a region in southwest Germany) to celebrate the marriage of Crown Prince Ludwig and Therese of Saxon-Hildburghausen.

Since then, it has grown into a huge fall festival that celebrates German heritage as well as the fall harvest. The largest Oktoberfest outside of Germany takes place in Cincinnati, Ohio, and many other Oktoberfests are held throughout the Great Lakes region. At all of them, sausage, bratwurst, sauerkraut, and other traditional German foods are served, along with German beer.

Norwegian Americans celebrate their cultural heritage on May 17, the day the Norwegian constitution was signed in 1814. Among the traditional Norwegian foods served at these festivities are lutefisk (dried cod soaked in lye) and lefse (potato flat-bread).

The majority of those who live around the Great Lakes are descended from German, Scandinavian, and Dutch farmers who settled there in the 1800s. Farming life shaped the diet and mealtime schedule of the region. Hearty breakfasts and generous lunches gave the farmers the energy to finish their work. German immigrants taught America to serve meals “family-style,” with all the food on the table at once, rather than bringing it out to the table in individual servings.

The Scandinavians brought their tradition of the smorgasbord to America. The smorgasbord is a large feast made up of a variety of small dishes laid out together on one table, beginning with bread and fish and moving through hot dishes, such as Swedish meatballs, all the way to dessert. Each person or family brings a dish to contribute to the smorgasbord. (The word “smorgasbord” has even been adopted into the English language to refer generally to anything offering a wide variety of items.)

Miners from Cornwall, England, had long eaten pasties (PAST-eez), small meat pies that were easy to carry for lunch. Immigrants to the Great Lakes area brought their tradition of Cornish pasties with them, and they are still a popular snack in the area.

Germans love beer and started a number of breweries around the Great Lakes. The Pabst and Schlitz breweries were both founded in Milwaukee, Wisconsin, in the 1800s by German Americans. (Milwaukee still ranks as the number-one beer-drinking city in America: While Americans on average drink 6 gallons of beer per year, Milwaukee residents average 42 gallons.) The Great Lakes region is also home to many well-known food companies, including Kellogg’s, Kraft, Pillsbury, Green Giant, and Land O’ Lakes. 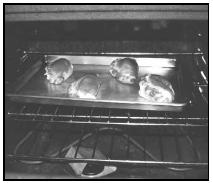 Pasties may be served as a snack, carried in a lunchbox to be eaten
cold, or as a light supper piping hot from the oven.

A majority of people from the Great Lakes region receive adequate nutrition. The lakes surrounding the area provide a variety of fish, including walleye, perch, catfish, and bass, that are high in protein and iron. With an abundance of rich soil and farming land, the region produces many different crops, such as wheat, corn, and vegetables. Wisconsin, whose milk and cheese products are rich in calcium, is one of the top dairy-producing states in the United States.

. The United States Cookbook: Fabulous Foods and Fascinating Facts from
All 50 States.

Savoring the Seasons of the Northern Heartland

I Hear America Cooking: The Cooks and Recipes of American Regional
Cuisine