Cuisine Of The Northeastern United States

Long a landing point for immigrants, the Northeast is a rich cultural stew pot into which new arrivals add their food traditions. 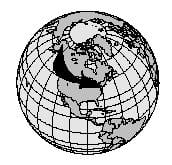 The Northeastern region of the United States, often referred to as “New England,” consists of Connecticut, Maine, Massachusetts, New Hampshire, Rhode Island, and Vermont. Most of these states border the Atlantic Ocean on their eastern coasts. The  combined population of these states is more than 14 million people.

Besides the Atlantic Ocean waters, states such as New Hampshire and Maine have thousands of lakes and ponds, which are protected by the Executive Office of Environmental Affairs.

Long before the British first established permanent settlements in what was to be called New England, the Native American tribes of North America had already occupied the land for hundreds of years. In fact, much of what the European settlers learned about harvesting crops and surviving in a new land was adapted from the Native Americans.

Crops such as beans and squash are native to the Indians and are still evident in modern-day  New England dishes, such as baked beans and succotash (a corn and bean dish). Maize (“Indian corn”) was first domesticated in Mexico, but was introduced to the Native Americans nearly 400 years before the arrival of the first settlers.

When the first settlers, the Pilgrims, arrived off of Cape Cod, Massachusetts (which was named for its abundance of cod fish), in the 1620s, they brought from England such foods as meat and vegetables. Local tribes were kind to the Pilgrims and helped them plant seeds for harvesting crops such as cranberries, corn, and tomatoes, taught them how to catch lobsters and clams, and taught them how to raise turkeys (called “turkie-birds” by the settlers). 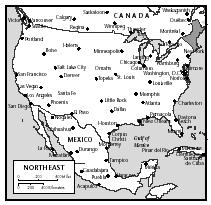 During the 1600s, most colonists ate from carved round or square wooden bowls known as trenchers. Within 100 years, bowls and plates made of pewter replaced trenchers. Early colonists ate with knives and spoons, with the fork first introduced in 1633. Linen napkins were often kept in high supply due to frequent messes when having to eat with fingers. The iron kettle pot was one of the most important cooking utensils in the colonial kitchen, allowing several items to be cooked at the same time.

Baking was also important. A sheet of tin was initially used to reflect the sun’s heat onto foods to heat them. However, Dutch ovens (portable metal covered cooking pots) set over an open fire and permanent brick ovens were used later. Most of what people ate was prepared at home (although shops carried baked goods and imported items). “Eating out” was not common, as most taverns were used mostly to socialize and drink.

These used to be called “journey cakes” in colonial days
because they were made to take on long journeys.

3. FOODS OF THE NORTHEAST

When most people picture the foods eaten in the New England states, the simple and hearty foods eaten by early colonists probably come to mind. Many of the same foods of hundreds of years ago continue to be grown and produced, including cranberries in Massachusetts and Rhode Island, dairy and sheep farming (especially in Vermont), and maple syrup throughout forested areas.

However, 200 years of immigrants migrating to the region have introduced a variety of international foods into New England’s cuisine. In the countryside of Maine, New Hampshire, and Vermont, Scottish and Welsh settlers’ descendents continue to bake scones (biscuit-like pastries) and oatmeal bread and grow a variety of vegetables. French Canadians introduced split pea soup and pork pies to the region, and Germans in central Massachusetts and Maine still make sauerkraut and a variety of sausages.

Each state in New England has its own unique foods that it contributes to the cuisine of the region as a whole. Connecticut adds milk, eggs, apples, pears, mushrooms, and beef. Its long coastline gives the state a successful fishing industry that includes clams, oysters, scallops, and a variety of fish. The world’s first lollipop was made in the city of New Haven in 1908. Maine is the country’s leading producer of blueberries and lobster (over 90 percent of U.S. lobsters are from Maine’s waters). More potatoes are grown in Aroostock County in Maine than in any other county in the country.

Cranberries require an abundance of water to grow, and the “Bay State” of Massachusetts has plenty (it is the country’s leading producer of the fruit). In addition, the first commercial yogurt was produced in the northeast city of Andover, and baked beans are Boston’s renowned dish. New Hampshire is dotted with dairy cows that produce large amounts of milk. Potatoes, apples, and the production of maple syrup are also popular.

Seafood, poultry, eggs, and milk are most common in Rhode Island. Clams are its specialty, as demonstrated by its famous clambakes each year. Vermont’s maple syrup production (the largest of any state) is nationally recognized. Dairy products and apples are also produced on the state’s abundance of farms. The popular Ben & Jerry’s ice cream was first made in the city of Burlington.

As a whole, New Englanders are best known for the wide variety of seafood the North Atlantic Ocean has to offer. New England Clam Chowder and Maine lobster are two popular seafood dishes. Seasonal fruits such as apples, pumpkins, and a variety of berries are often included in meals, particularly as ingredients in fruit pies (which may be served for dessert along with puddings and milkshakes called frappes). The boiled dinner, a one-dish meal of boiled beef, cabbage, carrots, and potatoes, is a New England original. After a large meal, tea (an influence from the British), coffee, or a New England wine or beer may be served.

The United States was partially founded by those who were seeking religious freedom. The Pilgrims, who settled in New England in the early 1620s, had separated themselves from the Protestant Church of England. They were known as separatists. As a result of this early influence, much of New England today is Protestant, although influences from other countries have brought Catholicism and Judaism to the area as well. Because the majority of the population is Christian, such holidays as Easter and Christmas are widely celebrated.

Thanksgiving originally was the Pilgrims’ celebration of their first year in the New World. It has become a national holiday now celebrated by all Americans for everything their country means to them, including food on the table. The historic Thanksgiving feast in 1621 lasted three days and included venison (deer), wild turkey, bass, cod, and maize (corn).

Secular (nonreligious) holidays are also widely celebrated, often in the form of festivals throughout New England. Many festivals honor the harvest of a specific crop or the abundance of seafood off New England’s
shores.

Connecticut’s Southington Apple Harvest Festival is the first two weekends in October, celebrating the rich tastes of the state’s autumn apple harvest. The city of Norwalk participates in the Norwalk Seaport Association’s Oyster Festival each September. For three days, nearly 100,000 visitors come to the festival to enjoy live entertainment, art and craft shows, and a diverse selection of food. Oyster boats and tall ships line the waterfront while oysters and clams are eaten in abundance.

One of New Hampshire’s largest annual events is the two-day Seafood
Festival each fall. The city of Hampton Beach hosts more than 50
restaurants and 60 caterers, who compete for prizes for the best food,
including best New England Clam Chowder and most creative dish.
Maine’s famous lobsters are honored each year during the Maine
Lobster Festival in the city of Rockland. The event celebrates the
importance of the lobster to the region. Festival participants enjoy an
abundance of lobster, as well as a parade and a variety of marine
displays. At the end of the five-day festival, The Great International
Lobster Race takes place. Contestants compete to run over partially
submerged lobster crates floating in the city’s harbor.

New Englanders typically eat three meals a day. Blueberry pancakes or waffles topped with fresh fruit and homemade maple syrup are popular breakfast dishes, and bacon, sausage, or eggs often accompany them. Toast with butter or homemade preserves with freshly squeezed juice may also be served. A national restaurant chain founded in Massachusetts, Dunkin Donuts, is a popular establishment to purchase coffee, donuts, and other morning or afternoon pastries.

On the weekdays, people on the go often grab lunch at a restaurant, occasionally from a deli, a seafood or steak restaurant, or possibly from one of many national fast food chains. Children may purchase lunch at school or prepare one at home and bring it with them to eat. Peanut butter and jelly, meat and cheese, and grilled cheese sandwiches are most popular. Most lunches will also include fruit (often an apple or banana) and a snack such as potato chips or pretzels. To drink, milk is most commonly served in school cafeterias, although soda and fruit juices are also popular among children.

Dinners may include several courses, including an appetizer, fresh bread with butter, salads, the main meal, and dessert. Appetizers are commonly soups, particularly cream-based chowders made with seafood and vegetables (such as potatoes and celery).

Desserts are likely to follow dinner after a short break to digest some of the food. During this break, freshly brewed coffee and tea are often enjoyed, particularly when guests are visiting. Popular desserts are fruit pies, sweet puddings, and ice cream. New Englanders consume more ice cream than any other region in the country.

In general, the people living in Northeastern United States receive adequate nutrition and have a large amount of natural resources. Because of its coastline, Connecticut has a wide variety of fish and seafood including clams, oysters, scallops, and flounder. These foods, caught fromthe Atlantic Ocean, are considered low in fat and rich in iron. Maine is also a top fishing state and is famous for its lobster. Rhode Island fishermen pull in large amounts of tuna and striped bass.

Not only is fish and seafood plentiful along the coastal Northeastern states, but fruits and vegetables are grown as well. In north Maine, more potatoes are grown in Aroostock County than any other county in the United States. Maine is also among the top producers of blueberries, and Massachusetts grows more cranberries than any other state. Such fruits provide a variety of vitamins and nutrients, including Vitamin C.

For those who cannot afford it, the United States government provides money and programs to assist needy families. New Englanders, however, earnabout $5,000 more in annual income than the national average.

The L.L. Bean Book of

How We Lived in Colonial New

Ethnic Food and the Making of Americans. [Online] Available