Cuisine of the Southern United States

The cuisine of the Southern United States developed in the traditionally defined American South, influenced by African, English, Scottish, Irish, French, Spanish, and Native American cuisines. Tidewater, Appalachian, Creole, Lowcountry, and Floribbean are examples of types of Southern cuisine. In recent history, elements of Southern cuisine have spread north, having an effect on the development of other types of American cuisine.

Many elements of Southern cooking—squash, corn (and its derivatives, including grits), and deep-pit barbecuing—are borrowings from southeast American Indian tribes such as the Caddo, Choctaw, and Seminole. Sugar, flour, milk, and eggs come from Europe; the Southern fondness for fried foods is Scottish, and the old-fashioned Virginian use of ragouts comes from the West Country of England.

Black-eyed peas, okra, rice, eggplant, sesame, sorghum, and melons, as well as most spices used in the South, are originally African; a preponderance of slaves imported to Virginia in early years were Igbo from the Bight of Biafra, and down to the present day Southern and Nigerian cuisines have many flavors and elements in common.

The South’s fondness for a full breakfast derives from the British full breakfast or fry-up. Many Southern foodways, especially in Appalachia, are Scottish or Border meals adapted to the new subtropical climate; pork, once considered informally taboo in Scotland, takes the place of lamb and mutton, and instead of chopped oats, Southerners eat grits, although oatmeal is much more common now than it once was.

Parts of the South have other cuisines, though. Creole cuisine is mostly vernacular French, West African and Spanish; Floribbean cuisine is Spanish-based with obvious Caribbean influences; and Tex-Mex has considerable Mexican and Native American influences.

The South is distinctive in its customs, food, and even dialect and accent. More than any other regional group, people born and raised as Southerners tend to think of themselves as Southerners all their lives, no matter where they live. By most geographic definitions, the northern border of the South is marked by the Ohio River and is straddled by the nation’s capital, Washington, D.C.

The population of the Southern United States is made up of many different peoples who came to the region in a variety of ways, each contributing to what is now called “Southern cooking.” American Indians, native to the region, taught European settlers to grow and cook corn, a grain unknown in Europe at the time. Spanish explorers in the 1500s brought pigs with them, introducing pork to the region.

West Africans carried some of their traditional foods with them, such as watermelon, eggplant, collard greens, and okra, when they were brought to the United States by force as slaves beginning in the 1600s. Creoles, known for their unique use of spices, are descended from French and Haitian immigrants who later mingled with Spanish settlers in the New Orleans area.

“Cajuns,” also recognized for their unique style of cooking, were originally Acadians, French settlers in Nova Scotia who were driven out by the British in 1755 and made their way to New Orleans. In Louisiana, crawfish (resemble miniature lobsters) and catfish are popular, prepared in dozens of different ways. Fried catfish is popular all across the South. Texas’s spicy and flavorful “Tex-Mex” cuisine reflects the state’s close proximity to the spicy cuisine of
Mexico. 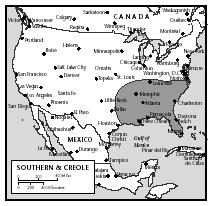 The American Civil War (1861–1865) had a major impact on the South and its food. Many plantations and farms were destroyed during the conflict. To survive, Southerners ate whatever they could grow or find, and nothing went to waste. When the economy began to recover, most African Americans were not allowed to share in the newfound wealth and continued to eat the simple foods that were available during the war.

This type of simple and inexpensive food became known later as “soul food.” The first African American, and the only ex-slave, known to have written a cookbook was Abby Fisher. Her book, What Mrs. Fisher Knows About Old Southern Cooking , was published in 1881 and includes many recipes that would now be considered soul food.

No one knows for sure how chess pie got its name. Although there are
many recipe variations, all have eggs, sugar, and butter in the filling,
and many contain buttermilk.

Because kitchens only had wood-burning stoves in the late 1800s, recipes did not give baking temperatures or times. Bakers simply had to guess how long something would take to bake and keep checking it. Even if they had baked something many times before, the fire could be hotter or cooler each time, so baked goods had to be checked frequently to make sure they did not burn.

3. FOODS OF THE SOUTHERN UNITED STATES

The staple food of the Southern United States is corn—it is used in grits (hulled and coarsely ground corn cooked to a thick–soup consistency and eaten at breakfast), a wide variety of breads and cakes, and as a breading on fried foods. Corn is native to the United States and was introduced to European settlers by American Indians.

Another staple food in the South is pork, originally brought to America by Spanish explorers in the 1500s. Chitterlings (pronounced CHIT-lins), made from pig intestines, were traditionally seen as a “poor person’s” food, but have recently begun to appear in fine restaurants. Barbecued meat, usually pork, on a grill is a Southern tradition. 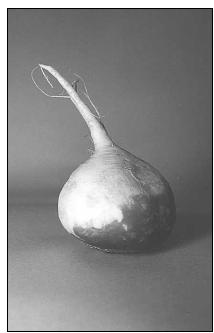 The turnip, popular for generations in the South, is the main
ingredient in Old-Fashioned Turnip Soup.

Besides grits, most people also think of southern-fried chicken when they hear “Southern cooking.” Traditionally served for Sunday dinner, fried chicken has become a stereotype of Southern food, popularized by Colonel Sanders’ Kentucky Fried Chicken. Other meats, such as steak, are also “chicken-fried” in the South by breading and frying them. Cornbread, made from cornmeal, is typically eaten with a Southern meal.

Okra, black-eyed peas, and collard greens are all common Southern-grown vegetables that were brought to the region by African slaves. The name for meat stew, gumbo, often thickened with okra, comes from a West African word for okra, quingombo.

Jambalaya, a pork and rice stew from the Creole and Cajun New Orleans region, takes its name from the French and Spanish words for ham: jambon and jamón, respectively. Crawfish, catfish, and shrimp are enjoyed all across the South.

Favorite desserts in the South include chess pie, sweet potato pie, pecan pie, key lime pie, and watermelon, which is also the most popular melon in the United States.

Most US Southerners are Christian, for whom the main holidays are Christmas and Easter. It is a longstanding tradition in the South to make fruitcake for Christmas. The Claxton Fruitcake Company in Georgia sells more than 200 tons of fruitcake each year.

The typical main dish for both holidays is ham. Southerners are known for their country ham, a hindquarter of a year-old hog that is preserved with either salt or sugar, smoked, and then aged for a year or more.

Another Christian holiday that receives special treatment in the South is Mardi Gras (French for “Fat Tuesday”), the day of feasting before Lent begins. New Orleans is famous for its Mardi Gras celebration, which lasts several days and involves parades, balls, music, and lots of food.

One traditional element of the feast is the King Cake in which a small figurine or dried bean is baked inside. Whoever gets the piece with the figurine in it is crowned king or queen for the day.

The main meal of the day in the Southern United States used to be at midday and was called “dinner.” The smaller evening meal was referred to as “supper.” In recent years, the main meal has moved to the evening, though most Southerners still call it “dinner.” During the 1800s, the era of large plantations, guests would often come to visit for days or weeks at a time.

Hospitality is very important to Southerners, and hosts prepare huge meals for their guests. A dinner menu from the mid-1800s may have included five kinds of meat, cucumbers and tomatoes, hot rolls, and five different desserts, plus three beverages. The African slaves did not share in this abundance of food, but lived on small amounts of salt pork, cornbread, and hominy (corn mush), plus whatever greens they could grow themselves.

This meager diet became the basis for what is known today as “soul food.”

Southerners’ favorite beverages are iced tea, usually loaded with sugar and called “sweet tea,” and soft drinks, many of which were invented in the South. Coca-Cola was developed in 1886 in Atlanta, Georgia. Pepsi was created 10 years later in North Carolina. Dr.

Pepper first appeared in Waco, Texas, in 1885, and Mountain Dew was first produced in either Virginia or Tennessee around 1961. Other Southern-made soft drinks include Royal Crown Cola, Nehi fruit-flavored drinks, Barq’s root beer, and Gatorade.

The South continues to be the largest consumer, as well as producer, of soft drinks. In the 1990s, North
Carolina was the number one soft-drink consumer of the 50 states with over 50 gallons consumed per person per year.

Other snack foods native to the South include corn dogs (hot dogs breaded with cornmeal), pralines (almond or pecan clusters), and the Moon Pie (a chocolate-coated marshmallow sandwich cookie), invented at the Chattanooga
Bakery in Tennessee in 1917.

People living in the Southern states generally receive adequate nutrition in their diets. Traditional Southern cooking is high in fat and calories, and many modern Southerners are striving for a healthier lifestyle, reserving the delicious fried and sugary foods for special occasions and celebrations.

Southern teens and adults are slightly more likely than people from other parts of the United States to smoke cigarettes. This is due in part to the role tobacco farming has played in the economies of such states as Kentucky, Tennessee, Virginia, and North and South Carolina.

A Gracious Plenty: Recipes and


Recollections from the American South


Lover’s Companion to the South

Southern Food: At Home, on the Road, in History

Cooking with Heart and Soul

Butter Beans to Blackberries: Recipes from the Southern Garden


Things Everyone Should Know about the South

AnythingSouthern.com: The Online Gateway to the South. [Online] Available
at

Chitterling Site, The (or The Soul Food Site). [Online] Available at

Creole and Cajun Recipe Page, The. [Online] Available at

Gritlit.com: More Southern food than you can shake a stick at. [Online]
Available at

Origins of Southern Food, Fall 1996: Applied Anthropology course project
at the University of West Florida in Pensacola. [Online] Available at