The Western United States has its own cuisine, distinct in various ways from that of the rest of the country. Those states west of Texas, Kansas, Missouri, and Nebraska would be considered part of this area, as would, in some cases, western parts of adjoining states. The locavore movement is increasingly influential, as is the concept of sustainability. The influence of the Native American cultures of each area, but especially in the Northwest and in Navajo country, is important in the cuisine picture of the Western United States 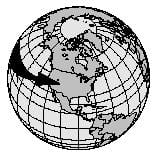 The Western region of the United States may be defined as including the states west of the Rocky Mountains. These include California, Oregon, and Washington bordering the Pacific Ocean on their western coasts; moving east, Montana, Idaho, Nevada, Utah, and Arizona form the basin and plateau region and feature some of the most dramatic scenery in the United States, with canyons (including the Grand Canyon), the Great Salt Lake, and the deserts of the southwest. The combined population of these states is about 42 million, the majority of whom (about 33 million) live in California.

The environment of this region is varied, but one problem that affects most Western states is the availability of fresh water. In urban areas, air pollution inspired government regulations in the 1970s, 1980s, and1990s to help curb smog-producing emissions from industrial and consumer sources (especially from automobiles). California has stringent auto emissions regulations. Phoenix, Arizona, also has problems with air quality.

As pioneers began moving west, they expected living to be difficult. Traveling with horses, livestock, and their families, the pioneers encountered challenges both from the harsh environment and with the Native Americans already living in this region. While some Native American tribes were friendly, others regarded the white pioneer settlers as invaders. Disease and lack of adequate food and water were trials that the pioneers confronted as they traveled from eastern towns and villages to the open spaces of the West. Drought was a regular happening on the prairie, which made life hazardous for those making a long westward journey. 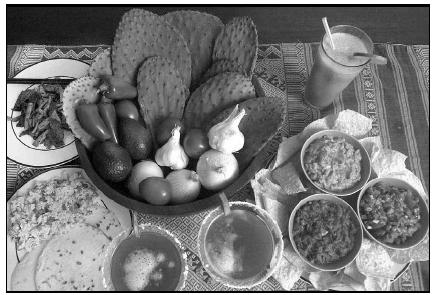 Despite these hardships, the pioneers enjoyed social gatherings. Shooting contests, riding and cattle-roping competitions, and other games that made use of the pioneer skills were organized. Some pioneer men, many of whom traveled without their families, also liked to gamble, playing poker in the saloons that grew up around settlements.

Most women did not get involved in the competitive sports, but socializing was important to them. Women would meet to “put up” (can) stores of food for the long winter months, gather for “sewing bees” when they would make quilts or do mending. Carding and spinning of wool and weaving cloth were also done, often meeting together as a group. Men and women would join together for dancing parties and harvest socials; many of their activities included food.

Brisket was roasted all day over a low campfire until the cowboysreturned for their evening meal.

The foods of these early pioneer days combined the recipes brought by families from the East, as well as contributions from the Spanish and Native American inhabitants of the region. Ranchers raised cattle on vast tracts of lands, and often took their meals over an open campfire while tending to the herds. A chuckwagon—a large cart that carried the supplies and utensils for cooking—often accompanied the ranchers as they traveled with the herd. The foods prepared for these men, known as cowboys, were hearty and filling.

As farmers began planting crops that grew well in this region and women became adept at cooking the foods of the area—such as buffalo and deer—recipes and eating habits were transformed.

In the late nineteenth century, workers were needed to build both the cities of the West and the transcontinental railroad to bring more people from the East. Immigration from Asia, especially from China, brought new foods and cooking styles. In the twentieth century other Asian groups (Japanese, Koreans, and Vietnamese) and Mexicans immigrated to the West, and contributed their own influences on the style of cooking. While meals still centered around meat, especially beef, cooks began including the vegetables and grains of Asia and Mexico in their recipes.

In the late twentieth century healthy lifestyles became a focus of many Western citizens, and the Western region seemed to take the lead in learning how to eat healthier and live a healthier lifestyle. Many people became vegetarians (those who do not eat meats and animal products), preparing meals from legumes (beans), rice, and vegetables.

3. FOODS OF THE WESTERN REGION

The foods found in the West are varied. The Pacific Northwest has fruit orchards—pears, cherries, apples, blueberries, and grapes. Northern California, Oregon, and Washington, are all home to wineries and produce much of the fresh fruit that is sold throughout the United States.

California produces almost 100 percent of the artichokes consumed in the United States, and is also a top producer of dried fruits like raisins, prunes, dates, apricots, and figs. The coastal waters of the Pacific Ocean provide abundant seafood, including Dungeness crab, calamari (octopus), and salmon. Relishes and salsas are popular  accompaniments to many dishes, and combine the influences of the many ethnic groups who live in the coastal states.

Idaho is home to vast potato farms, and the Idaho potato is stocked by almost every supermarket in the United States. Reflecting the Americans’ love for potatoes that are quick and easy to prepare, about three-fourths of Idaho’s potato crop is now processed and sold as frozen french fries, instant mashed potatoes, or similar products. In Idaho, fur-trapping was one of the first occupations. Today it is also famous for gold and silver mines, and beautiful mountains and rivers.

Meat, especially beef, is produced on the vast tracts of ranch land that make up large sections of sparcely populated states such as Arizona, Wyoming, Montana, and Colorado. (Ranches in Arizona and Wyoming average over 3,700 acres each.)

Use as a dip for fresh raw vegetables, as a dressing for cold or hot noodles, or as a sauce for freshly cooked fish.

In the cool, wet climate of the Northwest region, apples have become an important food product for the state of Washington. This orchard crop dominates the state’s agricultural economy. Washington is the nation’s leading producer of apples.

Crunchy apples from Washington state are the inspiration for many baked apple dishes. 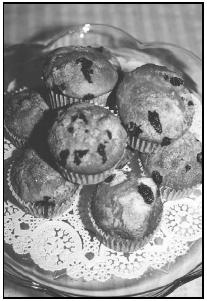 Blueberry muffins are easy to make and may be enjoyed
anytime—for breakfast, with lunch or dinner, or as an
afterschool or bedtime snack.

Western citizens celebrate all the usual American holidays—Fourth of July, Halloween, and Thanksgiving. Religious holidays such as Christmas and Easter (Christian); Rosh Hashanah, Yom Kippur, and Hanukkah (Jewish), and Ramadan and Eid al-Fitr (Muslim) are celebrated by people who practice those religions.

Two holidays celebrated in the Western region reflect the influence of Hispanic and Asian immigrants to the area. A special celebration influenced by the immigration of Mexicans into the United States is Cinco de Mayo (Fifth of May). Latino Americans hold festivals where special food, such as guacamole, Mexican rice, refried beans, burritos, and tamales, are served.

Cinco de Mayo remembers the victory of the Mexican army over the French forces in the Battle of Puebla on May 5, 1862. To the Mexicans and Mexican Americans, this event is regarded as a symbol of their resistance to European
domination. In the United States, this holiday was celebrated as early as 1863 in San Francisco, California.

Chinese New Year is a time of family reunions, thanksgiving, and remembering one’s ancestors. When families gather there are always special foods that are prepared and eaten. One special dish is called jai, which is a vegetarian dish of root and fibrous vegetables. Each vegetable ingredient has a special meaning and is included in the dish for
a purpose. Many holiday practices are based on traditions and superstitions. Vegetables prepared for New Year represent good luck, happiness, and prosperity for the coming year. It is considered unlucky to include any white ingredients, such as tofu or bean sprouts.

Other foods for New Year’s celebrations include whole fish (for abundance); chicken (for prosperity); head, tail, and feet of the chicken (for completeness); and uncut noodles (for long life).

Chinese New Year’s traditions require that the entire house be cleaned before the celebration and all brooms and mops put away. To use a broom or mop on New Year’s would be to “sweep away” the good luck. Another popular custom is to wear and decorate with the color red, as this color is considered lucky. Although many modern Chinese Americans are not superstitious, they carry on the traditional practices in celebration of the New Year with family and friends..

Westerners generally eat three meals each day, like most Americans. However, because of the intense heat in the desert regions, lunch may be more leisurely, and features a lighter menu of cool foods (such as salads and fresh fruits) accompanied by refreshing lemonade, limeade, or iced tea.

Westerners generally receive adequate nutrition in their diets, although recent immigrants sometimes experience difficulties finding adequate resources for shopping for and preparing food from their native countries. With an abundance of rich soil and farming land, the region produces nutritious fruit and vegetable crops. Westerners in general are among the most active and health-conscious of all Americans.

From Fingers to Finger Bowls: A Lively History of California Cooking.