Hattie Garlick: Why I didn't spend any money on my son in 2013

Hattie Garlick didn’t spend an additional penny on her son for an entire year. Discover her honest account of why she did it and how she got on… 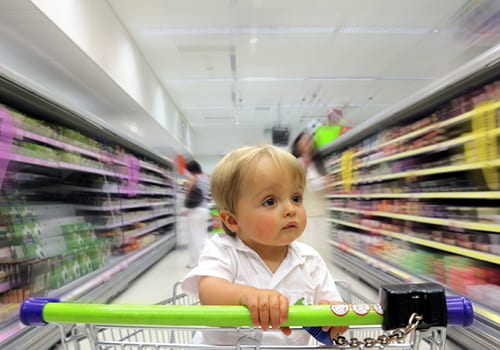 Here’s a true story for you. Not so long ago, I watched a group of primary school children visiting a city farm. They cowered in horror as a goose waddled towards them. All except for one, bold little girl who strode stockily towards it, extended a chubby finger and shouted: “Oh my God! It’s a giraffe!”

At the beginning of last year, my two year old may not have been quite that out of touch with the places his food came from, but he wasn’t so far off.  Food, his food anyway, came from brightly coloured plastic. Lunch emerged from boxes with a celebrity chef’s face on it (fish fingers with added omegas for growing brains) or cartoon characters emblazoned over them (organic ready meals, fully balanced and with ‘hidden’ vegetables). Snacks were individually encased in shiny foil packets or tiny boxes. Drinks came from throw-away pouches or cartons. It was costing him any true understanding of food sources, and costing me a small fortune too.

I wasn’t alone in feeding him this way. Apparently, infant ready meals were so rare in 2006 that they didn’t even qualify as an industry category in the UK. Five years later, they were worth £25.8 million and estimated to be growing by nearly 25% every year.

Why? It’s a question I was to probe repeatedly as I made a new year’s resolution to see if I could cut out all spending on kiddy products for an entire year. Which would prove necessary, or even just helpful to the modern family and which would prove superfluous? By using websites like Freecycle and swapping clothes and toys instead of buying anything new, barring expensive activities and – yes – kiddy foods too … they all went out of the window.

At each meal, I decided, I would cook just one dish  – one that adults and child alike could eat and enjoy. Or that was the theory. In reality, food was one of my biggest worries. My husband and I both work hard in order to pay the bills that pile up alarmingly fast on the doormat. Time is in short supply. So when we started to wean our son Johnny as a baby, it seemed so much easier to pick up some pouches of organic moosh from the supermarket. Why spend precious time toiling over a sweet potato puree when he was likely to smear it into the carpet anyway?

Fast forward a year and a half and we were relying on supermarket products for almost every situation: sweet treats to whip out of handbags and avert tantrums on the train; ready meals to sneak vegetables into him at supper time; snacks to forestall hunger as the ready meal heated up…

And don’t get me wrong- some of these products were great. Many were organic, some actually did achieve the unachievable and sneak the occasional vegetable into him. And yeah – I missed them sorely in the early days of my experiment. When Johnny refused to try a single spoonful of samosa or flung his fiorentina on the floor, for example, I thought there was a genuine chance he might starve or at the very least develop some Victorian disease… rickets perhaps?

Why was I such a weed, so lacking in confidence? An industry report I stumbled across online boasted that: “the 54% of parents who regularly cook could be persuaded to purchase manufactured products by marketing the fresh and natural nature of ingredients in baby food products.” But in April, the story hit the newsstands that babies may in fact need to eat twice as much shop-bought food to get the same energy and protein as meals cooked at home. The study, from the department of human nutrition at the University of Glasgow, said many weaning foods "would not serve the intended purpose" of giving a baby extra nutrients or a range of tastes and textures. Somehow, we modern parents have been conned into thinking that faceless food companies can provide better for our children than us.

Gradually, I also began to question whether these ‘convenience’ products were really saving me that much time either. Sure, they were faster than making two entirely separate meals from scratch – one for the adults and one for the boy. But as our experiment began to work better, and I discovered more recipes we could all enjoy together, I realised how much less time I was spending in the kitchen.

I might make a vat of tomato sauce on Sunday night. We’ll eat in on pasta on Monday, add mince and eat Bolognese on Tuesday, add a mashed potato top to some and have a shepherd’s pie on Wednesday, then add kidney beans for a (not too spicy) chilli con-carne on Thursday.

I cannot tell a lie. I would love to say that Johnny’s eating habits have been transformed. That he is now an informed gourmand with a sophisticated palate. But, well, three year olds don’t work that way. He still refuses to eat some of the more adventurous dishes my husband and I would enjoy. And so there have been compromises. We adults now eat more simply too. There are occasional days (days when deadlines loom, noses are snotty, or nights have been nightmarish) when we all have fish fingers and beans for supper.

And, of course, there have been tantrums along the way. Major tantrums. He still has days when he refuses to co-operate. The difference is that it matters less. I haven’t spent any extra, precious pounds on what’s in front of him, and since it was meant for my husband and I too, I can take a deep breath, shrug, and… take it back into the kitchen. Either he changes his mind (as happens 90% of the time) or I wolf it down myself for lunch.

I think the more relaxed atmosphere is good for him and his table manners. I’m pretty sure it’s good for my health too – because the meal I’m cooking for the grown-ups is now for Johnny too, I am more conscientious about filling them full of good things.  It’s definitely better for our bank balance – according to my scribbled sums, we saved at least £600 last year on food alone. All of which is certainly good for my sanity too. Oh, and last but not least: my nails, which are now far, far less bitten.

Sitting down together as a family and sharing the same meal is a great way to develop healthy eating habits from an early age. Choosing the right recipes will certainly help promote positive attitudes to eating well so there is no reason why recipes shouldn’t be shared with your children. That said there are some important things to remember when cooking for adults and little ones alike:

For more guidance check out nhs.co.uk.

Are you a fan of Hattie's methods or do infant-focused foods have their place? We would love to hear your thoughts…