Sugar and your body 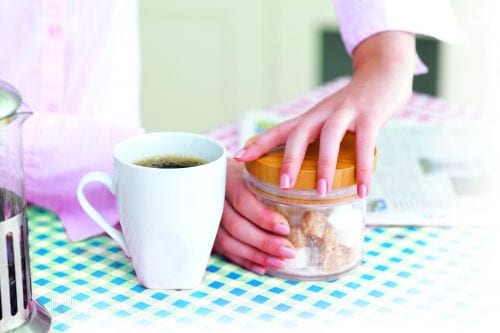 Sweet is one of the first flavours we learn to love as babies, and we all enjoy the taste of something sweet. So what happens in our bodies when we eat sweet foods? And should we be worried?

Sugar in our foods

Table sugar, called sucrose, is by far the most common sugar we consume. There are, however, sugars in other foods too: fruit contains fructose along with other sugars; milk contains sugars, predominantly lactose; and honey is nearly 80 per cent sugars, mainly fructose and glucose.

To distinguish sugars in our foods, the World Health Organization (WHO) recommends we use the terms ‘free sugars’ and ‘intrinsic sugars’. Free sugars are sugars added to foods, either at home, in restaurants or factories, but also include sugars naturally found in honey, syrups and fruit juices. Intrinsic sugars describe sugars that are naturally found in food — the sugars bound into plant cell walls found in vegetables and fruit.

Not all sugary foods are equal

Free or added sugars are rapidly digested. If we were to eat table sugar or honey by itself, it would be broken down very quickly into single-unit sugars and absorbed into the bloodstream. But it’s not often that we eat sugar by itself, so how quickly sugars are digested depends on what else is in the food or drink. More complex foods are more slowly digested. Sugars in vegetables and fruit take longer to access because they are bound in the plant cell walls and combined with a far greater amount of other nutrients, including fibre, to slow digestion.

Drinks containing sugar are rapidly digested as there is nothing else in them to slow digestion. Sugary sweets and highly processed foods containing a lot of sugar will also be digested fairly quickly.

All sugars are digested in the small intestine where two-sugar units are broken into single units of sugar. These single sugar units can then be converted into glucose in the following process.

2. Once the sugars are converted into their single-sugar units, they are absorbed through the cell walls of the small intestine into the blood stream.

Our cells have specific transport systems to transfer these sugar units through to the other side. Glucose and galactose have the quickest transport system and they reach the blood stream a little faster than fructose, which uses a different system.

3. Once in the blood stream, these single sugars head straight for the liver. When they get there, fructose and galactose are converted into glucose.

4. With this new supply of glucose for energy, the liver now decides on its best use:

If our bodies need energy straight away, glucose is released into the bloodstream to travel to the cells needing the energy.

Any glucose that is not needed straight away gets packaged up into glycogen, a multi-unit sugar (polysaccharide) for storage until it’s needed. Glycogen is stored in the liver and in our skeletal muscle cells.

Once the storage capacity of our liver and muscles is filled with glycogen, any remaining glucose is converted to storage as fat in ‘adipose’ tissue. The location of adipose tissue varies in proportion between the sexes and different body types, but we probably all know where some of our adipose tissue is. This explains how eating too much sugar makes us gain weight.

How does our body deal with sugar?

Blood glucose (also called blood sugar) levels can increase from five to 45 minutes after having food or drink containing sugars. Our blood glucose (blood sugar) concentration after food or drink is affected by the amount of carbohydrate we have and how quickly it is digested, its absorption and uptake of glucose by the liver, and lastly by insulin secretion and the sensitivity of our cells to that insulin.

Insulin is one of a number of hormones that help control our blood glucose level and to keep it within a reasonably tight range. Insulin is secreted by the pancreas in response to rising blood glucose levels. The body needs insulin to help glucose get into the cells where it will be used.

Insulin resistance, where insulin’s effect is not as strong as it should be, is a precursor to type-2 diabetes. Phrases like impaired glucose tolerance (IGT) or impaired fasting glucose are also used to describe insulin resistance. While there is no one cause of insulin resistance, excess energy intake, lower physical activity, lower muscle mass and central obesity (weight gain around the middle) are all associated with its development.

After two to three hours, blood glucose levels return to the fasting or pre-food level.At this stage, glucagon is the main hormone involved in releasing stored glucose into the bloodstream to maintain blood glucose levels. You won’t necessarily feel hungry at this point — this process is all going on in the background.

The extent to which foods containing carbohydrates (sugars are a sub-set of carbs) raise blood glucose levels is measured by the glycaemic index (GI). Higher-GI foods cause a greater increase in blood-glucose levels but our bodies deal with this very quickly so it falls back to the baseline more quickly and we don’t feel full for long. On the other hand, lower-GI foods release glucose into the bloodstream more slowly, blood glucose levels do not reach the same peak, and we feel fuller (and more energetic) for longer.

While the GI can vary widely depending on the combination of foods eaten, the cooking method and other factors such as the ripeness of food, there is now a reasonably large body of research that indicates if our overall diet is lower GI, we can maintain better health.

While sugar is not ‘bad’ in itself, over-consumption of high-sugar food and drinks can lead to health problems. Sugar is pervasive in our foods, it’s high in energy, and it’s easy to over-consume sugary foods, and overconsumption leads to weight gain. So sugar has become a contributor to obesity, which is where the health problems kick in.

Sugar is by no means solely responsible for our obesity epidemic. But it is certainly part of the equation.

It’s a common belief that sugary foods can make kids hyperactive. Perhaps surprisingly for parents, the science doesn’t support this.

A review of 12 double-blind placebo-controlled studies of sugar ‘challenges’ failed to find any evidence that consuming sugar affected the behaviour of children, even those diagnosed with ADHD.

Parents’ expectations of their children appear to have more to do with the behaviour they report than any sugar their children have or have not eaten.

Healthy children have the same mechanism as healthy adults for digesting carbohydrates, including sugars, and their bodies are well-designed to manage blood glucose levels after eating. That doesn’t mean kids should eat unlimited sugar — the same applies to kids as it does to adults: less is better.

Fructose has been getting a lot of attention lately from the proponents of sugar-free diets, who single it out as the worst type of sugar, responsible for obesity and disease. But does it deserve this bad reputation?

Professors Walter Willet and David Ludwig writing in British Medical Journal in January 2013 tell us that, “Although fructose is metabolised by different pathways from glucose, both seem to have adverse effects, and there is no good evidence that replacement of fructose with glucose would be beneficial.” Adverse effects? Too much sugar of any kind, as with high amounts of low-GI carbohydrate foods, are linked with increased weight and insulin resistance, a precursor to heart disease as well as type 2 diabetes.

A key reason for the focus on fructose is the very high consumption of high-fructose corn syrup in beverages in the US. However, it may come as a surprise that both sucrose (table sugar) and high-fructose corn syrup contain about equal amounts of fructose and glucose. So while our sugar-sweetened beverages are not so different, fortunately, most of us are consuming a lot less than the average person in the US. Let’s aim to keep it that way.

The jury is still out on whether fructose is a special case or not. Currently there is not enough evidence to say fructose is worse than other sugars. In the meantime, it’s really all free or added sugars we should be thinking about limiting. Getting our two serves of fruit each day is still strongly recommended as a healthy part of our diets; sugar-sweetened drinks and sugar-laden cakes are not.

Eating sugar doesn’t cause diabetes. (Although being overweight is a contributing factor to developing type 2 diabetes, and for some people the excess energy will have come from sugary foods.)

Once you have diabetes, however, it’s important to limit and manage your intake of all carbohydrates, including sugars. That’s because you’re no longer producing enough insulin to cope with high amounts of carbohydrates.

Sugar gives you a ‘rush’

People often talk about needing a sugar ‘hit’. If you’re out biking for hours, you can feel physically low in energy and eating something high in readily-absorbed sugar provides a quick and easily digested energy boost. But when you’re sitting in the office at 3pm and feel a bit flat, there’s little scientific evidence to say you need a ‘sugar hit’, and any ‘boost’ you might feel after eating a sugary treat is likely to be psychological only.

Our natural body clock is a more likely culprit than our body craving an energy boost. If you’re hungry mid-afternoon, you may need a snack, but it could be you need to think about the foods you eat at lunch and why they’re not sustaining you for very long. There is some evidence that if you do experience symptoms of light-headedness in the afternoon, a lunch high in sugars could be implicated (even though measurable hypoglycaemia, low blood sugar, is not usually found). In this case, you would be better to reach for a snack containing sustaining carbohydrates or protein to help you through.

There are other reasons you may feel tired: some people report a heavy lunch makes them drowsy; others may need to look at their sleeping patterns. When we feel tired, a walk in the fresh air is often more useful than food.

While there is a lot of research happening around sugar (and lots of hype), the basic recommendations around consumption haven’t really changed. We don’t need to exclude sugar from our diet, nor do we need lots of sugary foods and drinks in our diet. Some of us are having too much. If that’s you, here are some tips to reduce the amount of sugar in your diet.