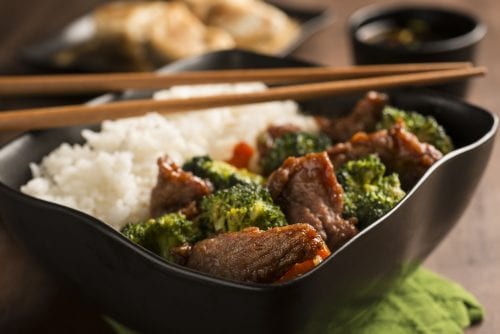 Q. “I eat a lot of stir-fries because they’re quick and easy. But I’m worried about the amount of sodium in the sauces. How can I cut back on the salt?”

A. Asian sauces are notoriously high in salt — a serious downside to an otherwise healthy cuisine. For example, one tablespoon of soy sauce contains around 900mg sodium — close to half of the total daily recommended maximum for adults. Some Asian simmer sauces can be similar. So check labels, choose the brand lowest in sodium and use as little sauce as possible when you cook.

Stir-fry sauces based on soy sauce or fish sauce (also incredibly salty) can be diluted with water with no loss of flavour.

To boost flavour in stir-fries without salt, try combinations of minced or sliced chilli, ginger and garlic, Chinese five-spice and sesame oil. Rehydrated Asian mushrooms and spring onions add a nice flavour, as do fresh herbs such as coriander, mint and Thai basil, added at the end of cooking. Chinese rice vinegar, lemon or lime juice and rice wine bump up the flavour even more.

Using prawns in a stir-fry will make a dish naturally salty, so for recipes outside the healthy realm, you may want to use less soy or fish sauce than suggested.