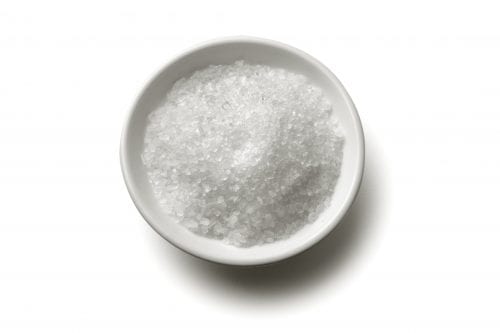 We explain the differences between the various types of salt on the supermarket shelves.

Salt, or sodium chloride, has been used for centuries to enhance the flavour and taste of foods. It also played an important role as a food preservative thanks to its ability to draw water out of foods, ensuring harmful microbes could not survive. These days we have other ways to preserve foods, and we often hear the call to reduce our intake for the good of our health.

Where does salt come from?

Salt is generally described as either rock salt or sea salt. Rock salt is mined from underground deposits whereas sea salt is produced from sea water by evaporation. New Zealand has no rock salt deposits, so until a sea salt industry was developed in the 1950s all salt was imported. Although not technically correct, some manufacturers use rock salt as a generic term to describe a coarser grind; in this case you would see the ingredient listed as sea salt.

Thanks to Jamie Oliver and other TV chefs, the ‘pure flaky crystals’ of sea salt like Maldon have become fashionable. Apparently you can taste the difference! Others point out that any salt produced from sea water is going to be over 97% sodium chloride, with the remainder made up of tiny amounts of calcium, magnesium and sulphates. These are unlikely to be detectable in the flavour.

With no expectation I would detect any difference, I decided a (sample of one) taste test was required. Imagine my surprise! The fine table salt was noticeably stronger and sharper in flavour, whereas the Maldon flakes were milder but the flavour lingered longer. This actually makes sense because the flakes were bigger so they took longer to dissolve.

I decided I’d include some ground rock salt in my research. Having made a mess of my desk with tiny crystals going everywhere, I realised it is all about crystal size. The ground rock salt was not as mild or long-lasting as the flakes, but it was not as sharp and ‘quick’ as the table salt. And the granules were a mix of sizes, definitely smaller than the flakes, but not as consistently fine as the table salt. Jamie: all is forgiven.
My conclusion from this is the chefs are right. Flakes are appropriate if you’re adding to prepared food, but for cooking and baking, use the cheaper table salt; by the time it’s dissolved there is no difference.

What you really need to know about salt

Professor Rod Jackson, speaking recently at the Joint New Zealand and Australian Nutrition Societies Conference, highlighted a dramatic turnaround in death rates from cardiovascular diseases in the 1950s. He attributed this to the introduction of the domestic refrigerator. Why? Refrigerated food dramatically reduced our reliance on salt-preserved foods. This in turn reduced the incidence of high blood pressure, a major risk factor for heart disease.

Many of us still consume too much salt for the good of our health. It’s the sodium in salt that has such a significant impact and because of this, processed foods must state on the nutrition information panel how much sodium they contain.

The Ministry of Health suggests the upper level for safe consumption of sodium is 2300mg per day, which is the amount in just one teaspoon of salt. But to reduce risk of chronic disease they suggest no more than 1600mg sodium each day – that’s around 7/10 of a teaspoon. Our average consumption is estimated to be around 3600mg each day – a little over 1½ teaspoons – so it’s way too high.

Iodine has been added to salt in New Zealand since 1924 and today many Kiwis are blissfully unaware we ever suffered from disorders of iodine deficiency. As well as goitre, iodine deficiency is associated with a wide range of health problems. The last National Nutrition Survey showed adults got only about half the recommended iodine intake and studies are showing a re-emergence of mild to moderate iodine deficiency. The New Zealand Food Safety Authority is considering the fortification of other staple foods in order to address our declining iodine levels. It’s estimated up to 85% of our salt intake can come from processed and manufactured foods, and most of this is not iodised.

Table salt was once our only choice. It’s finely granulated and, because salt is so attractive to moisture, it usually contains an anticaking agent so it flows easily even in humid conditions It’s great for kitchen use, and it’s easy to fill up the shaker from this. Best of all: it’s iodised.

Both table and rock salts are available in bulk bags for filling your own shaker or grinder. Cerebos and Mrs Rogers both have a coarse salt in a convenient grinder that you can throw away once it runs out. But no rock salt is iodised, so I don’t recommend it.

Pacific Salt has a range of salt in a resealable pouch: coarse, flaky and iodised flaky. Of course, our pick is the iodised flaky. What a great idea.

A tiny amount of salt can actually bring out the sweetness of some foods, e.g. tomatoes, grapefruit and pineapple. A pinch of salt is often used in baking for the same purpose.

If you have an old recipe book, chances are it will tell you to add more salt than you’re accustomed to. Cut it back. Our tastes have changed as we’ve reduced our salt consumption.

Most cooks will tell you to taste your food before adding any seasoning; it may not need it!

‘Lo Salt’ is a reduced sodium salt alternative. It contains 1/3 salt (sodium chloride) and 2/3 potassium chloride. Potassium intakes in New Zealand are lower than recommended, and potassium helps blunt the effect of salt on blood pressure, so this is definitely worth a try. If you know someone who uses excessive table salt, you could try putting this in the salt shaker and see if they notice.

(Note that some blood pressure and heart medications help the body retain potassium so anyone on these medications should check with their pharmacist or GP first to ensure their potassium levels don’t get dangerously high.)

A huge range of herbs and spices can be used as flavouring alternatives. See Back to basics: Herbs and Your guide to spices for tips and more information.

While our soils may be deficient, iodine is abundant in seawater so fish, shellfish and seafoods (like seameal, seaweed and kelp) are rich sources. Other foods containing useful amounts of iodine include eggs and to a lesser degree dairy products.

We’re not encouraging you to use more salt: on the contrary, if you habitually add salt, we’d like you to stop and think about cutting back. When you do use salt, make sure it’s iodised.

Iodised salt is available in standard granulated table salt as well as in flakes, so whatever you’re using it for, choose iodised.

Whether you are trying to reduce your blood pressure or you just want to keep it down, we’d recommend trying Lo Salt.