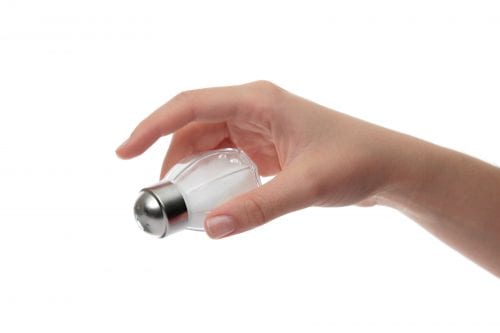 Senior nutritionist Rose Carr reminds us that the problem with sodium chloride, or salt, is that while we need a little, we’re getting much more than is good for us.

Why is a high-salt diet so bad?

Researchers from Otago University have recently shown the effect of salt on cardiovascular disease risk is from more than just its effect on blood pressure. They showed that salt was also implicated in hardening the arteries. The good news is that reducing salt intake does help to lower elevated blood pressure and improve the functioning of blood vessels. In addition to its cardiovascular effects, there is now strong evidence showing a link between high-salt diets and gastric cancer, osteoporosis, cataracts, kidney stones and diabetes. A high-salt diet may also encourage growth of the bacteria that causes stomach ulcers, Helicobacter pylori, and be linked with exercise-induced asthma.

It’s considered safe to consume up to 2300mg of sodium a day – the equivalent of one teaspoon of salt. But to reduce the risk of chronic disease the Ministry of Health suggests no more than 1600mg sodium each day – that’s about seven-tenths of a teaspoon. That’s a lot less than our estimated average consumption of around 3600mg each day – a little over one-and-a-half teaspoons of salt.

Around 75 to 85 per cent of our salt consumption is from processed foods, so even if you use salt sparingly in cooking or at the table you could have a high-sodium diet. That’s why it’s important to compare the nutrition labels on processed foods and go for lower-sodium options. Research has shown we don’t notice any taste difference with small reductions.

A 2005 published survey found bread was the largest contributor of sodium in our diets (accounting for up to 27 per cent), followed by processed meats (accounting for up to 14 per cent). Since that time, the National Heart  Foundation (NHF) has worked with bread manufacturers to reduce the amount of sodium in bread and approximately 150 tonnes of salt will be removed on an annual basis. The NHF is currently working with producers of processed meat to reduce the sodium in their products.