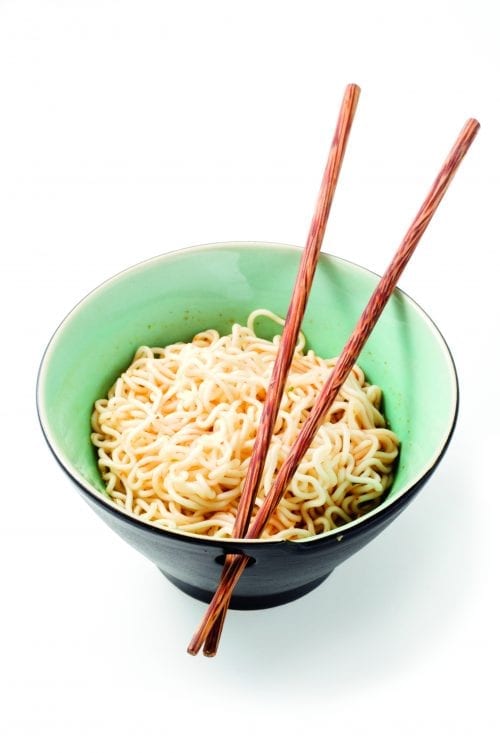 Maggi Extra Delicious 2-minute noodles (not to be confused with other Maggi noodles) deserve a special mention here. These noodles are ‘baked not fried’. While it is possible to have a high-fat baked product (as we find with high-fat crackers using the ‘baked not fried’ claim), in this instance the product is low in fat. These and Trident Vietnamese Rice Noodles were the only low-fat noodles we found.

Most instant noodles are high in sodium, and we found a large number extremely high. The sodium is mainly in the flavour sachets. A high-sodium diet is strongly linked to high blood pressure and heart disease. The Ministry of Health recommends 2300mg sodium (upper limit for adults) on a daily basis. And while 2300mg a day might be OK, to prevent chronic disease it’s recommended we aim for less than 1600mg a day. Children’s daily sodium needs are lower. That’s why we were shocked to find some noodles containing as much as 2100mg per serve.

Even those instant noodles with the lowest energy are a substantial snack at 1150kJ. If you’re not burning that kind of energy in your daily activities, we recommend a lower-kilojoule alternative. The higher energy products at 2000kJ or more may be OK (energy-wise) if you’re using them as a meal base, provided you add protein and vegetables.

The Maggi Extra Delicious 2-minute Noodles range is a better choice than anything else we found (they still contain a lot of sodium at 970mg per serve). Look for the blue ‘baked not fried’ symbol as the packaging is quite similar to Maggi’s standard noodles which are fried and significantly higher in fat and sodium.

Even so, instant noodles served on their own are an ‘occasional food’ and we do not recommend any of them as an everyday snack.

Instant noodles are appealing: they’re super-quick, tasty and pretty cheap. But we can’t say they are a healthy choice.

If noodles are your favourite, try this: throw away the flavour sachet and add a small can of flavoured tuna to the noodles. Less sodium, more protein, better nutrition, yummy taste!