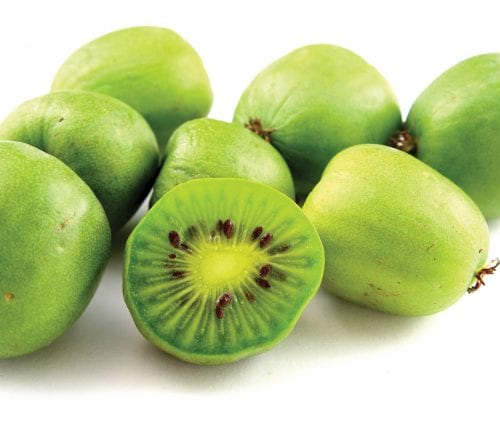 As the name suggests, kiwiberries look similar to their kiwifruit relative but are around the size of a grape. They can be eaten whole as they don’t have a furry skin, and they taste similar to, but are sweeter than, regular kiwifruit. The botanical name for the kiwiberry vine is Actinidia arguta and its common name is ‘hardy kiwi’ because it can survive the very cold winter temperatures in eastern Asia, China and Japan, where it grows wild.

Eight kiwiberries (around 100g) provide: 80mg of vitamin C, which is more than 40 per cent of the suggested dietary target; around 10 per cent of our daily vitamin E and folate; 3g fibre; and a useful amount of potassium.

Buttercup squash is a variety of cultivated squash belonging to the Cucurbitaceae family that includes pumpkins and gourds. It is very popular in Japan, where it’s known as Kabocha. Buttercup squash has a dry texture and sweet flavour that makes it ideal for roasting, soups, baking and pasta dishes, or thinly slicing for tempura. To use, simply cut the squash in half, scoop out the seeds with a large spoon and peel the skin off (or keep it on, it’s edible) with a good peeler or sharp knife. If you find it hard to cut buttercup squash in half, pop it in the microwave for a few minutes to soften the skin a bit first. You can also eat the seeds. Give them a good clean, then dry them out overnight, toss them in oil, then roast them in a single layer on a tray in the oven.

Buttercup squash is rich in beta-carotene, which converts to vitamin A, with just half a cup cooked providing over one-third of the suggested dietary target each day, as well as 3g fibre and useful amounts of folate and potassium.

Buttercup is a low-FODMAP squash that can be used instead of butternut squash.

Jerusalem artichokes are a good source of folate, an essential vitamin for many cellular processes including DNA production. They’re also good for gut health as they’re a source of the prebiotic soluble fibre inulin. Dietary fibre supports bowel health.